March Madness: USC Basketball Advances to the Round of 32 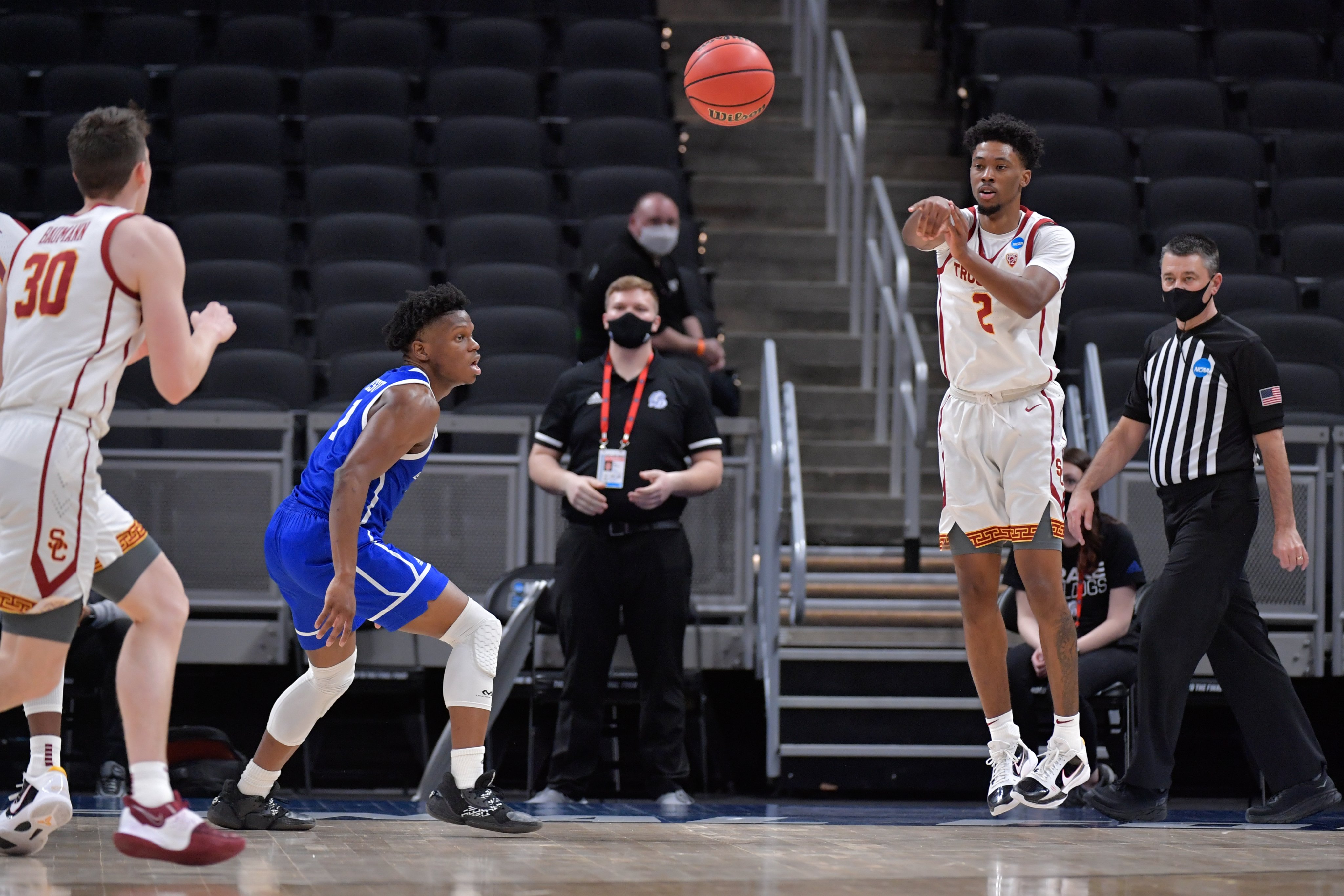 USC basketball took down a Cinderella hopeful in Drake

March Madness is in full effect as USC basketball took on the Drake Bulldogs. A PAC-12 team goes against a Missouri Valley Conference team that could sneak out of the first four against a strong Wichita State team. The first thing that comes to my eye was the difference in size between these two teams. USC is one of the tallest teams in the nation, and anyone watching can tell. At the half in the round of 64 in March Madness, USC leads Drake 40-37.

This coming off the back of Joseph Yesufu, the sophomore guard for the Bulldogs, who put up 18 points, three rebounds, and one assist at the half. The next closest scorer for Drake was Shanquan Hemphill in his second game back from a broken foot. Hemphill added 6 points for the Bulldogs. No surprise on the other end of the court, Evan Mobley is the Trojans’ leading scorer. Mobley put up 13 points, eight rebounds, and three blocks in the first half. The biggest stat that glares at me is the missed free-throws for the Trojans. This is so apparent that this was one of Wichita State’s issues and a reason the team fell victim to the Bulldogs in March Madness.

In the second half of the March Madness matchup, USC was able to build up a lead. The team had solid ball movement and stepped up defensively. The change of putting Tahj Eaddy on Yesufu really affected Drake’s play and seemed to make Yesufu tired. Drake showed a real hunger on one of the possessions as they could get three or four shots on the basket before finally scoring. Coach Darian DeVries even pulled out the press for a few plays in the middle of the half but went away from that quickly. Coach DeVries tried to bring it back towards the end of the game, but it was too late. The USC Trojans keep dancing in March Madness. USC wins 72-56 over the Drake Bulldogs. Yesufu’s effort wasn’t enough to lift the Bulldogs. Yesufu finishes the day with 26 points, five rebounds, and two assists. The balanced attack from the Trojans included three double-digit scorers. These players included one of the best freshmen in the country and Pac-12 Freshmen of the year. Evan Mobley finished with 17 points, 11 rebounds, two assists, and three blocks. Evan’s older brother, Isaiah Mobley, was right behind him, adding 15 points, five rebounds, two assists, and a block. The last player for USC was Drew Peterson, who added 14 points, two rebounds, and two assists.

Joseph Yesufu is putting his squad on his back pic.twitter.com/Ew6Q8Dd8Xq

In March Madness matchups, a big part of the game is finding open shots. Drake needs to move the ball and create shots for each other. Drawing help down low, driving the ball and kicking it out, and passing with a purpose will be the way to win in this game. If the Drake Bulldogs can do this, this team can keep dancing. The ball movement will likely have to be focused around Joseph Yesufu as USC will likely focus more of their defense on him. With that in mind, I hope that Coach Darian DeVries will recognize this and help create open looks for Garrett Sturtz and D.J.Wilkins. If these two other pieces for Drake can contribute outside the arc or create by driving the lane, Drake has a shot. The length and size of USC are a disadvantage mentally for the team. While this team is athletic, watching the first half, the Trojans are playing lazy. Drake can exploit this by driving into the big men and getting to the free-throw line.

Drake couldn’t move the ball around enough to be effective. After having only six assists in the first half of play, the second the team added five more for a total of 11 assists. This low number of assists really showed as the only player able to score and be in double digits was Joseph Yesufu. USC, on the other hand, moved the ball to the tune of 20 assists. Tahj Eaddy was the major distributor, almost getting a double-double with nine points and 10 assists.

Another awesome Evan Mobley defensive highlight. This time using his length around the rim. pic.twitter.com/nbHbSwQx5b

USC is relying a lot on Evan Mobley, who had three blocks in the first half, and the rest of his team needs to help out more. To win this March Madness matchup, the Trojans need to step up to the Drake Bulldogs. These players are longer, but the tenacity of Drake is keeping them in the game. Wichita State could drain Drake’s offense by stepping into them and putting hands on the players. The Trojan’s Coach Andy Enfield needs to have his men get into the lanes and disrupt the passes. USC basketball needs to body up and really bother this Drake team. Doing this, USC has a shot to go far in the March Madness tournament. Preparing now will help the Trojans move forward, the Trojans have shown sparks of it, but the team needs to remain diligent.

At the beginning of the second half, Drake showed a spark in its defense and even through in a press. Unfortunately, it was not enough, and having to play into this game, the Drake team seemed to tire as the game went on. The Bulldogs continued to fight, but USC’s length and the change of Eaddy onto Yesufu was too much to overcome.

Evan Mobley is a Top-5 pick. His brother Isaiah isn't bad either. Tough tandem inside. USC to the Round of 32. Fascinating matchup ahead with Kansas.

One of the reasons that Drake has lost in previous games was rebounding. In this March Madness game, USC basketball needs to use its size to dominate the boards. The Trojans need to focus on preventing second-chance points for Drake. USC needs to help itself by getting boards on both ends of the court. Using its size, the Trojans can get second-chance points, put backs and prevent the number of looks Drake can get. This basic move will be vital moving forward in March Madness and the NCAA tournament. In the first half, Drake had four more rebounds than the Trojans. Drake will hang around being a ball-hungry team and having a chip on their shoulder, and USC needs to separate itself.

USC had one possession where it allowed the Bulldogs to fight under the back until the team scored by free-throws. That was the difference in rebounding. In this March Madness matchup, The Trojans did just enough to win off of size and athleticism. I hope that moving forward, and Coach Enfield can motivate his team. The size of USC needs to be its advantage if it hopes to keep dancing into tougher matchups.