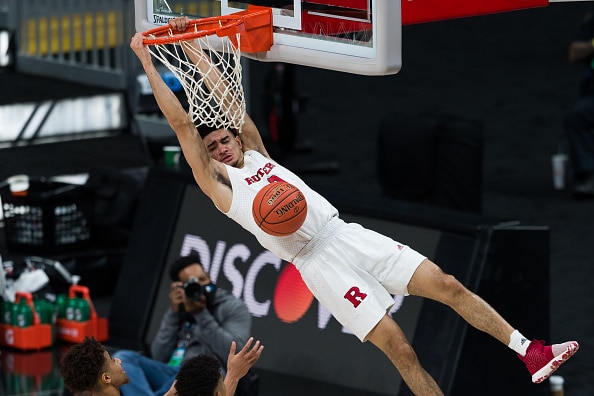 The Scarlet Knights gained control of this March Madness opening matchup by going on a 14-2 run mid way through the second half. Clemson would catch up, but Rutgers did not surrender the lead, squeaking out a four point victory.

Caleb McConnell posted a double-double off of the bench, scoring 13 points and bringing down 10 rebounds. Geo Baker added 13 as well for Rutgers, and Myles Johnson had 10 boards on the day.

Aamir Simms led all scorers with 15 points, part of his double-double, as he added 11 rebounds as well.

In March Madness, any factor can win or lose a game for a team. In this game, bench productivity had a huge impact. McConnell scored 13 points in 24 minutes off the bench. Clemson combined for just six points off of the bench on 3-18 shooting.

Ron Harper Jr. was quiet for Rutgers, scoring just 10 on 3-14 shooting. McConnell stepped up, giving the Scarlet Knights a boost off the pine. Paul Mulcahy also stepped up, scoring just 8 but knocking down two of his three shots from beyond the arc.

Rutgers did not play particularly well today, especially on offense. The Scarlet Knights, who had not been in March Madness since 1993, shot just 39% from the field and 27% from three. However, they racked up nine more rebounds than the Tigers.

The starting center for Rutgers hobbled off the floor in the final two minutes of the game with an apparent ankle injury. He was unable to finish the March Madness game and it is unclear whether or not he is available for Sunday’s matchup.

If Johnson is out, or even dealing with the injury, Rutgers is in trouble. Johnson rebounds very well and is a key part of the offense, tapping the ball out on missed shots for second opportunities.

Cliff Omoruyi is the backup, but the freshman is still very raw and does not have the same experience Johnson has. Today, Omoruyi played just nine minutes, going 0-1 from the field, but did bring in three boards. It will be interesting to monitor how Rutgers uses him if Johnson cannot play, and it is possible Rutgers experiments with a five guard lineup at times.

Rutgers moves on to March Madness’ Round of 32 where it will face off with second seeded Houston on Sunday.