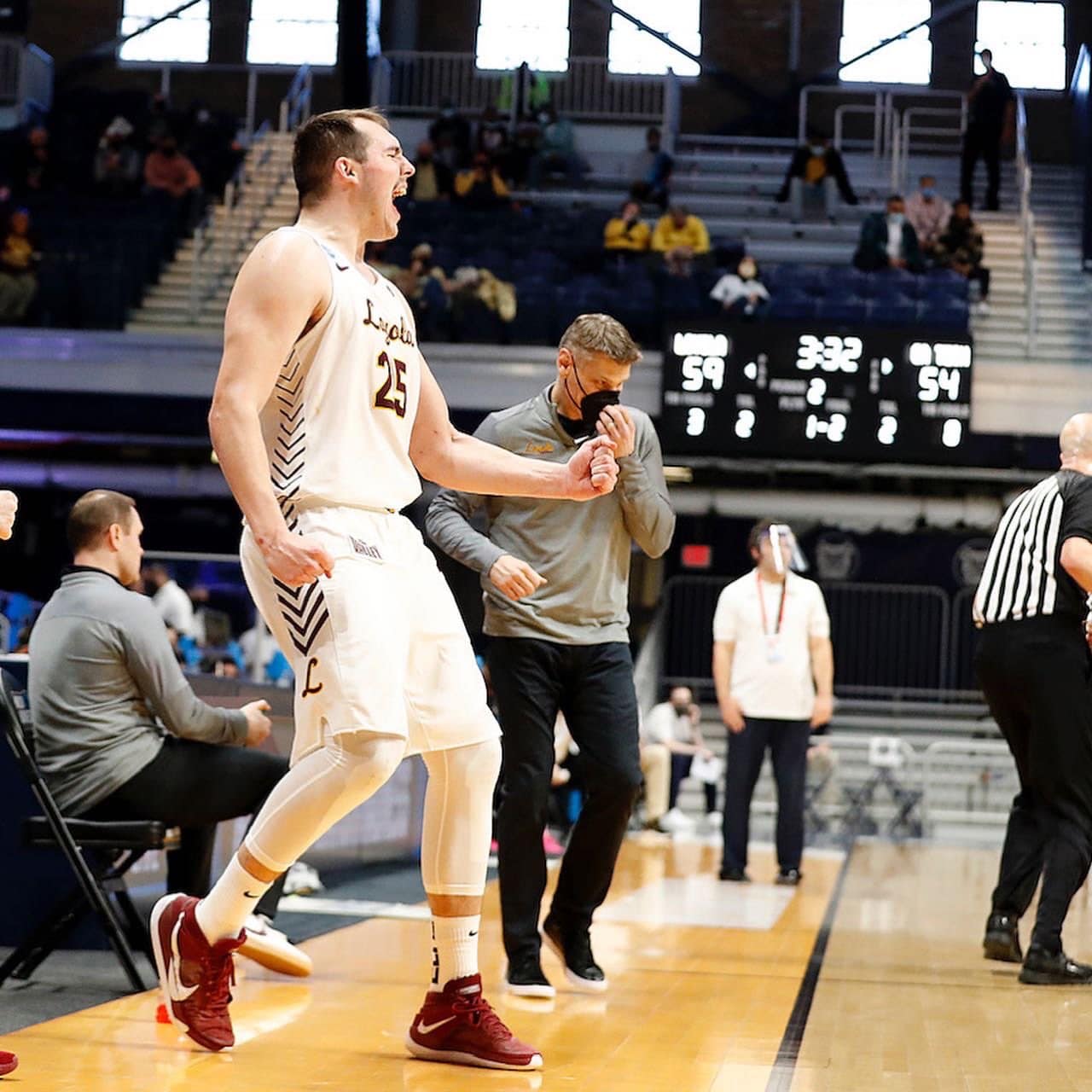 Loyola Chicago basketball finishes off Georgia Tech for a date against Illinois.

Loyola Chicago basketball probably didn’t deserve to be seeded as low as they were.

The Ramblers were selected as an eight seed despite losing just four games the entire season, running away with the Missouri Valley Conference Tournament championship.

Loyola had a tough draw in their first tournament game since 2018’s Final Four loss to Michigan, facing off against the ACC Tournament Champion Georgia Tech Yellow Jackets.

Although the Yellow Jackets were without ACC Player of the Year Moses Wright due to a positive COVID-19 test, this game had plenty of anticipation as the best game of the opening round. Georgia Tech certainly brought loads of energy and fight, but Loyola’s perimeter shooting and defense eventually overpowered the Yellow Jackets.

Loyola fought back from an early deficit to win by the score of 71-60, setting up a highly-anticipated Round of 32 matchup with top-seeded Illinois.

While it certainly wasn’t the most exciting game on Friday, Loyola’s win over Georgia Tech wasn’t your typical 8-9 game. Here are our three takeaways from an exciting afternoon showdown.

Loyola fell behind early in the first half behind a frantic pace from Georgia Tech, as the Yellow Jackets’ defense swarmed the Ramblers, forcing turnovers and allowing Georgia Tech to get off to an early 13-3 lead.

However, Loyola was able to climb back later in the period with their three-point shooting, behind big shots from Lucas Williamson and Braden Norris.

Williamson and Norris both hit four of their seven three point shots, was Williamson led all scorers with 21 points.

Rather than driving the ball to the rim, Loyola got back into the game with their three-point shooting. Cameron Krutwig hit some big shots in the low post, but without the sharpshooting of Williamson and Norris, the Ramblers likely would not have come back to win the game.

Against Illinois on Sunday, Loyola will need to keep up their pace with that of the Illini. Both teams have comparable perimeter attacks, as the matchup between Norris and Williamson against Trent Frazier and DaMonte Williams will be a major storyline.

If the Ramblers can’t hit their three-point shots, they will simply have no shot against the Illini. Loyola showed that they’re capable of overcoming an early deficit, however, against a top-tier opponent, Loyola will need to be nearly perfect.

In the second half, it was a totally different story. Krutwig finished the game with ten points and five rebounds, taking advantage of the absence of Wright by making his presence and size advantage apparent in the post.

Although Krutwig was named a Third-Team All American earlier this week, the senior is by no means a traditional center. Krutwig won’t necessarily beat you by overpowering you, instead, his finesse and precision close to the basket is what makes him so deadly.

While Krutwig can still technically return next season due to the NCAA’s ruling of this season not counting against eligibility, for all intensive purposes this is his final run in a Loyola Uniform. Despite facing off against his Second-Team All-American counterpart in Cockburn, Krutwig’s play will go a long way in determining the outcome of the Ramblers’ Round of 32 matchup against the Illini.

Krutwig won’t overpower Cockburn, but if he can outsmart him by drawing fouls and kicking the ball outside of the post, he can make a similar impact as he did against other big men such as Grant Williams, Jordan Caroline, and Xavier Sneed during the Ramblers’ 2018 run.

Even though Loyola was able to come back to defeat Georgia Tech, the Yellow Jackets still shot an impressive 57% from the field, with nearly all of their scoring coming from the guard positions.

Against Illinois, the Ramblers’ inability to shut down opposing guards will be their death sentence for obvious reasons. With National Player of the Year favorite Ayo Dosunmu at the point guard position, the Illini will be licking their chops if Loyola fails to adjust.

Williamson, Norris, and Keith Clemons must do a better job of guarding their men against Illinois. One of Dosunmu’s greatest strengths is his ability to share the wealth, meaning that even if Loyola can neutralize him, the opportunity will be there for Williams or Frazier.

Loyola’s defense has been advertised as one of, if not the best defense in the country this season, so it’s no surprise that their defensive efficiency will determine the outcome on Sunday.

Dosunmu is only half the battle. If Frazier, Adam Miller, and Andre Curbelo can be contained, the Illini will have a really hard time making anything happen against Porter Moser’s defense.