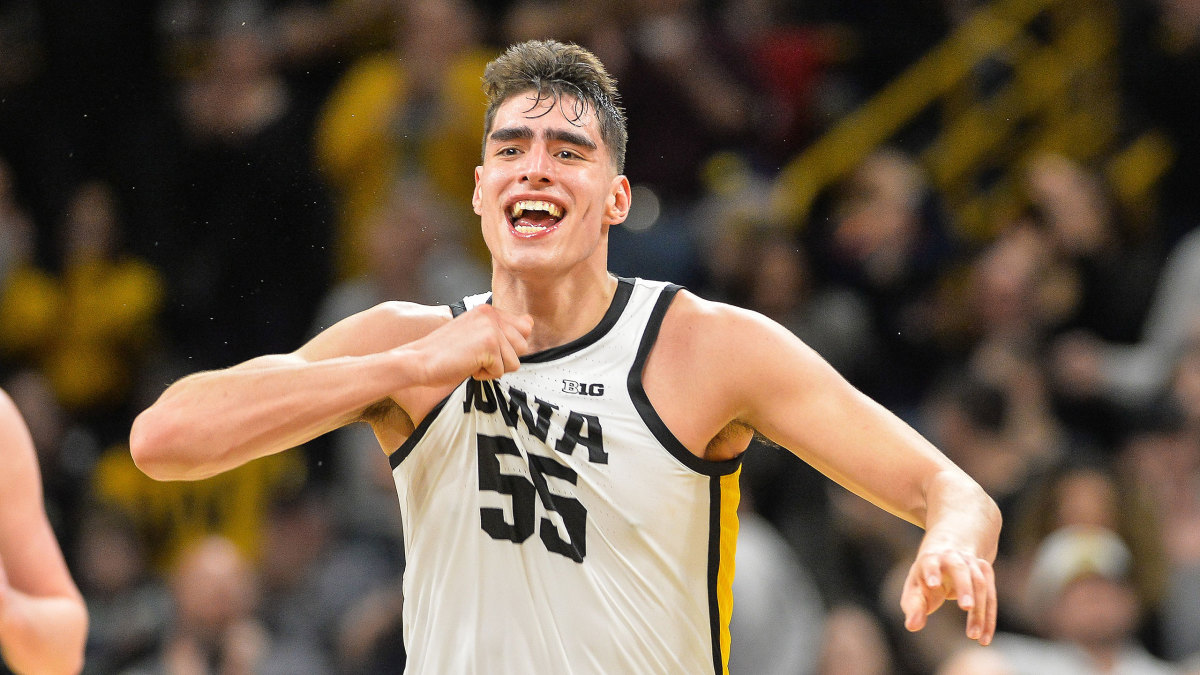 Indianapolis, Indiana – It was a literal battle of giants today in Indy as the #15 seed Grand Canyon Antelopes brought a physical fight mentality and didn’t back down to the #2 seed and highly regarded Iowa Hawkeyes of the Big Ten Conference. Luka Garza, maybe the best player in the nation came out hot and nailed two threes sending the Hawkeyes out an early 11-3 lead. The Hawkeyes kept pouring it on forcing 1st year Antelope head coach Bryce Drew to call a timeout and settle down his Grand Canyon squad. The Antelopes then came out and battled themselves into the contest and forced a physical battle with Garza with giants of their own in 6’10 Alessandro Lever and 7’0 Asbjorn Midtgaard. Lever from Italy defended Garza physically in the post in the first half forcing Garza to take a seat for a few minutes while Midtgaard from Denmark tried to attack the post offensively. With Garza out, the Hawkeyes went small and went zone keeping the Antelope possessions out of the interior while making some big three point shots by Jordan Bohannon and Joe Weiskamp as the first half ended and the Hawkeyes went into halftime with a 43-31 lead. The second half was more of the same as the Hawkeyes gave the Lopes a good taste of Garza and Weiskamp and hit their first 7 of 11 shots and never relinquished their lead which extended at one point to 22. The Hawkeyes finished the game defeating Grand Canyon 86-74. The Antelopes in their first tournament appearance under Bryce Drew gained some great experience in this contest which should help them out next year.. but one thing is for certain. Grand Canyon gave Iowa all it wanted in terms of physicality and that will serve Iowa well going into the next round

1.) Luka Garza Is The Most Complete Player In College Basketball

Garza showed up to play in the NCAA Tournament and it showed in his first game as he led his Hawkeyes to a commanding victory over the Antelopes. Garza came into the game and quickly proved to everyone why he is the most complete player in the college game. After scoring a quick attack at the basket from the interior, he then stepped outside to hit consecutive three pointers helping Iowa jump out a quick 11-3 lead and forcing Bryce Drew to settle his team down. Even though he was saddled with two fouls in the first half after some strong physical play against Grand Canyon’s interior bigs, Garza came back strong in the second half and finished what he started…. pounding away and helping Iowa push the lead to over twenty.

2.) Bryce Drew Has Grand Canyon Headed In The Right Direction

Bryce Drew knows all about March Madness. He was immortalized forever in March Magic while playing for his father Homer Drew at Valparaiso and hitting the last second shot that send his Crusaders to the next round over Ole Miss. While Grand Canyon could have used his shooting prowess, Bryce Drew has shown the world that he can coach just as good as his brother Scott who is the head coach of the Baylor Bears of the Big 12. This year Drew loses his entire starting lineup with the exception of sophomore Joban Blavksher who showed a lot of potential in the game against the Hawkeyes. The big x-factor right now is how good can the future Lopes that were on the bench be? Only one… sophomore Gabe McGlothlan scored major points for Grand Canyon tonight but if any of the young players on the bench are as solid as McGlothlan, the future will be very bright for the Antelopes in the future and we could very well be seeing some more March Magic out of Bryce Drew in the future.

3.). Iowa Is Showing The Country That The Big Ten Is A Force To Deal With

The next two days are going to be telling. The Big 12 is 6-0 in tournament play and the Big 12 while not undefeated has had some great showings by Iowa, Illinois, Maryland, Wisconsin, Rutgers and Michigan. That’s six of nine teams left from the Big Ten and all have a very reasonable shot of going to the Final Four. All told the NCAA Tournament is going to come down to the best of two conferences: the Big Ten and the Big 12. Who is left standing is undecided but with players like Garza, Cockburn and Dickinson still alive… the Big Ten is still kicking strong for a national title.