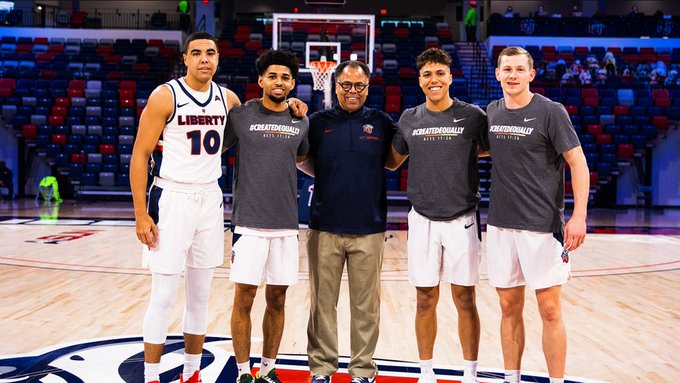 Here are the five players that will have a huge impact in the Atlantic Sun Men’s Basketball Tournament that starts this afternoon and concludes with the championship game on Sunday, March 7. Liberty is the top seed and two-time defending champion. In the last NCAA Tournament played, the Flames beat Mississippi State in the opening round before falling to Virginia tech in the round of 32.

One of the best stories in college basketball this season is being authored by @BUKnightsMBB! New to D-I, the Knights are breaking all the rules, enjoying an incredible season in @ASUN_MBB thanks to a deep team & the dynamic coaching of @Bellarminehoops! #SwordsUpBU #RISE pic.twitter.com/ctbAFXP5vR

Here are the players to watch in this year’s Atlantic Sun Men’s Basketball Tournament.

McGhee was named Player of the Year in the Conference. A sharpshooter, he is fourth in the country in made three-pointers with 84. He averaged 15.5 points, 4.2 rebounds while shooting 83% from the charity stripe. He had 27 points in helping Liberty clinch the regular-season title against Bellarmine on February 27. That could be a finals preview if the seeds hold true.

Asadullah gets it done on the court and in the classroom. A unanimous First Team selection, Asadullah also is an all academic-team selection with a 3.5 GPA as a finance major. He stuffs the stat sheet as well averaging 14.2 points, 7.9 rebounds (second in the conference), and 3.5 assists per game.

A unanimous First Team selection, Bradshaw has led Bellarmine in its first Division I season. He averaged 15.6 points, 7.2 rebounds, and shoots 52% from the field and 83% from the charity stripe.

Ferguson shoots 49% from the field and averaged 13.6 points per game earning second-team all-league honors. A graduate student with a 3.4 GPA en rote to his MBA, needless to say, he is a smart player on the floor as well.

Liberty has won a lot of games the last three years and senior Elijah Cuffee has been around for all of it. He ranks third in the nation for active players with 130 games played. Liberty and Cuffee have won 101 of those games, which ranks second among Division I active players and second in Flames history. Cuffee is averaging 10.0 points and 3.4 rebounds in 24 games this season.