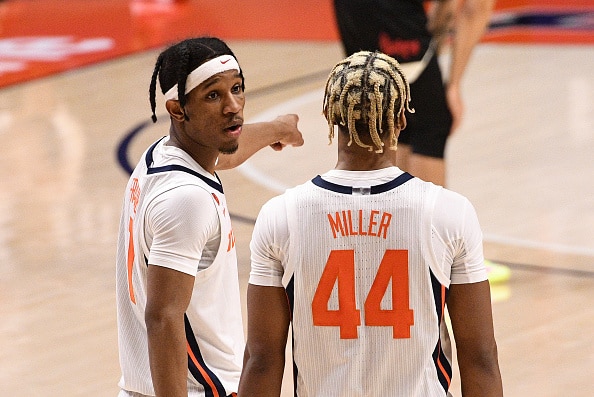 Illinois basketball had a statement win over second ranked Michigan at Ann Arbor.

Illinois basketball trumped the Wolverines 76-53, despite not having leading scorer Ayo Dosunmu available due to injury. Instead, it was Trent Frazier, senior guard, who put 22 points on the board, including two baskets from beyond the arc.

Michigan struggled immensely on offense, shooting only 34.7% from the field and only hitting two of seven shots from bonus territory. Despite shooting a whopping 24 free throws, Michigan still scored a season low.

1) Illinois basketball is more than a two-man show

What a win for Illinois basketball, defeating one of the nations top teams without having its best player. Usually for the Illini, Kofi Cockburn and Dosunmu run the show, averaging 38.7 of their 81.2 points per game. Today, Frazier, who scored just over 10 per contest, had himself a huge game to lead all scorers. Just behind him was freshman Andre Curbelo, who added 17 off the bench.

Illinois basketball has now beaten back to back ranked opponents on the road without Dosunmu. Scoring without one of the big two is huge for the team, and the fourth ranked Illini are a scary team if the supporting players are contributing the way they have.

Just when it seems a team in the league is finding its legs, here comes another conference foe to sweep them out from under them. Honestly, it may hurt the conference on Selection Sunday, as beating up on each other takes attention away from how good each team is on their own.

The latest victim of this was Michigan. The Wolverines, coming off wins over Ohio State, Iowa, and Indiana, were being put on the same tier as Baylor and Gonzaga by some. Illinois came in and proves that they are here to contend for that designation. Ohio State has a chance to do the same to the Illini on Saturday in Columbus.

Illinois is the new leader in Quadrant 1 wins — the Fighting Illini have eight.

3) Gonzaga versus the field

Michigan showed clear weakness in this game, shooting the worst they have all season and getting throttled at home. It is safe to say this Wolverine team is good, but to put them on the same tier as Gonzaga is disrespectful to the powerhouse Mark Few has in Spokane.

If a team gets hot, it can absolutely make a run for the title, and these two teams, when clicking on all cylinders, can realistically be playing in April. But right now, every team, including Michigan, Illinois, and even Baylor have some flaws, while the Zags have yet to show any real issues.

Michigan has an interesting circumstance, hosting in-state rival Michigan State on Thursday before traveling to East Lansing for a quick rematch on Saturday.