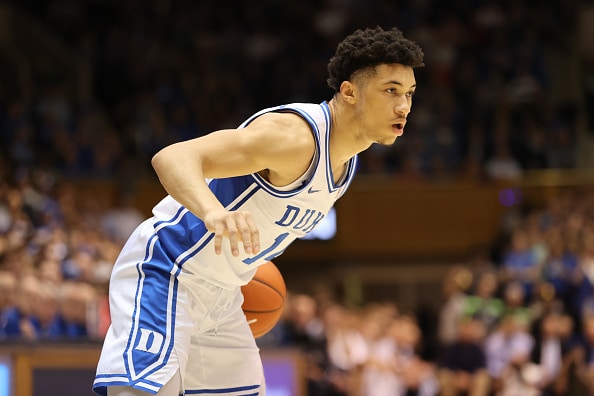 Matthew Hurt had a huge day for Duke, scoring 22 with five shots from beyond the arc. Jeremy Roach added 12, and Jordan Brakefield posted 11 points off the Blue Devil bench.

Virginia’s frontcourt shined once again, as Sam Hauser and Jay Huff combined for 39 of Virginia’s 65 points. Veteran point guard Kihei Clark posted 15, but failed to convert on a last second three-pointer that would have been the game winner.

This game was a turning point for Duke basketball, which now sits on the right side of the bubble. Virginia’s woes have been more exposed by the game, and the former seventh ranked team has four games to turn it around before the ACC Tournament.

Virginia’s third leading scorer and best outside shooter at 48% took two shots in this matchup. He went 2-2 from the field, both coming from dunks in the first half. Duke basketball played great defense on Murphy, not letting him get shots off when the ball found his hands. However, two shots for someone with the ability of Murphy is unacceptable under any circumstances. If Virginia wants to be successful, Murphy has to shoot the ball.

For this to happen, Tony Bennett has to make an offensive adjustment. Murphy, who currently plays the small forward, has to play as the shooting guard on offense. In Bennett’s offense, Murphy is setting screens and rolling. This frees up Kihei Clark and Reece Beekman, who shoot 31% and 28% from three.

A quick adjustment having Beekman screen and Murphy come off those screens frees him up, and gives Beekman attempts at the rim while Murphy is taking more volume on offense.

Since dropping back to back games against Notre Dame and UNC, Duke has won three straight games, this one holding the largest magnitude. Matthew Hurt has averaged 23 points in the three wins, and he has improved drastically since the season started.

Right now, Duke plays four more games, all against unranked foes. However, if the Blue Devils win out and make a run in the ACCT, Coach K’s squad is not the usual seven seed that we are used to seeing in the field of 68.

News flash: Tony Bennett loves defense. It has been his staple since he began coaching, and it has stuck throughout his entire career. However, he is now able to recruit offensively talented players, molding them into defensive walls as well. This season, this has not been the case, as it seems those good on offense lack on defense, and vice versa.

The exceptions from this statement are Jay Huff, Kihei Clark, and Sam Hauser, who all have issues on both sides of the ball but have improved and can be trusted with either. Other than them, Bennett has to make a decision. Casey Morsell, Kadin Shedrick, Beekman, and Justin McKoy are great defenders but still have work to do offensively. On the other side, Murphy and Tomas Woldetensae are lights out shooters, but lack on defense.

Bennett has to find a way to mix and match these players effectively, and create the most efficient lineup on both sides of the ball. Without those combinations, Virginia will continue to struggle and will be an early exit in March.