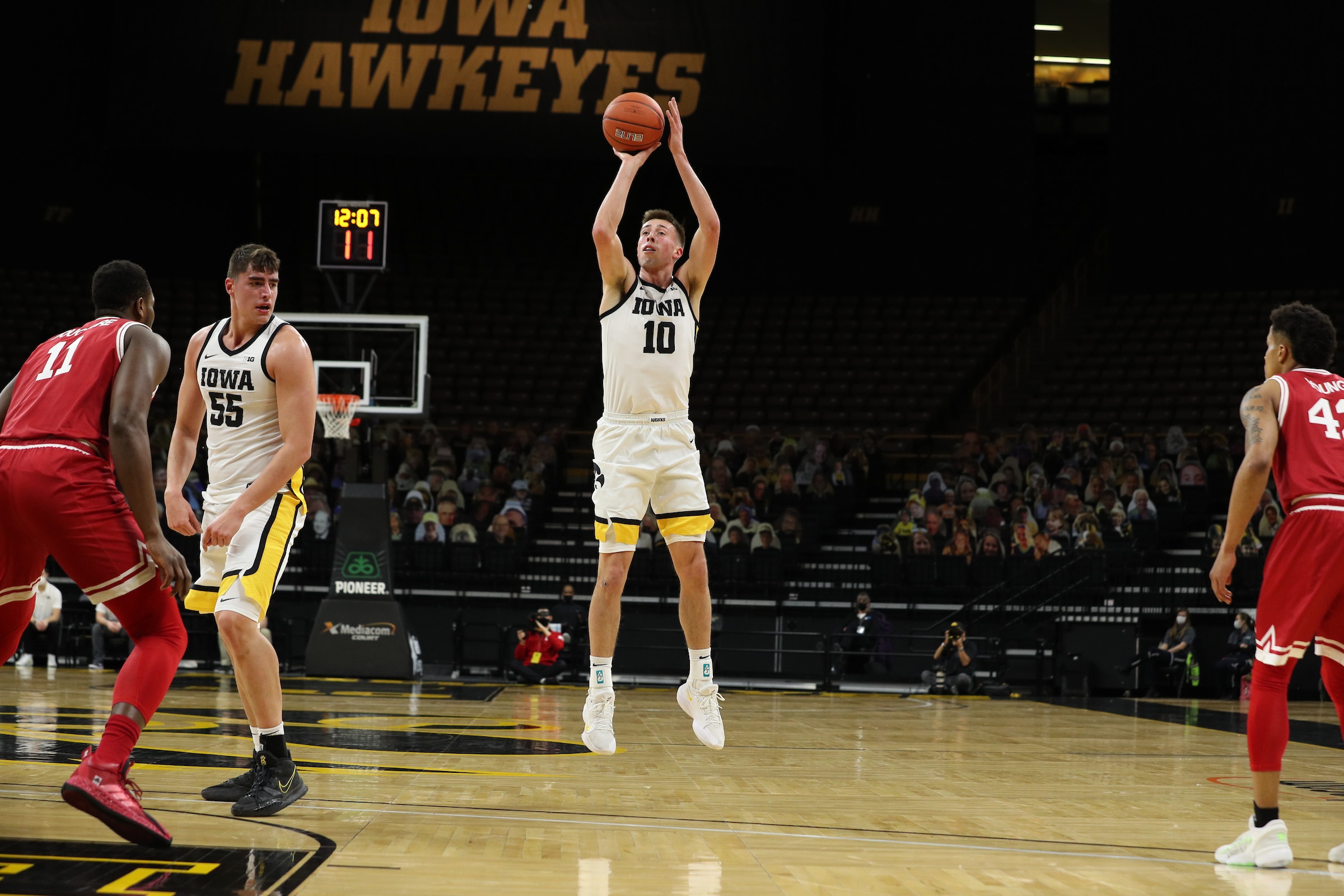 Over the course of the last two weeks, one of the major storylines in college basketball has been the drop-off of Iowa basketball.

Heading into the season and throughout the first two months of the season, the Hawkeyes had been regarded as one of the favorites to win the National Championship.

However, after losses to Illinois, Indiana, and Ohio State over a two-week stretch, questions have risen about Iowa’s true capabilities to compete in the Big 10 and Big Dance.

After Wednesday’s 40-minute domination of Rutgers, there should be no more questions.

The Scarlett Knights had a drop-off of their own a few weeks ago but had recovered to the tune of four consecutive wins. Now fully healthy, Rutgers posed a legitimate challenge to Iowa on Wednesday night.

1) When Iowa basketball shoots efficiently, they are virtually unbeatable

A major factor in the Hawkeyes’ recent struggles had been their inability to shoot, primarily from three, at a respectable clip.

Wednesday night was a different story. Iowa shot 48% from three, with their primary shot takers–Joe Wieskamp and Jordan Bohannon–shooting at a high mark.

When Iowa can shoot the three-pointer at a near-50% mark (which is absurd for any team), they are literally impossible to beat. This was on display earlier in the season in games against UNC and Iowa State, where both opponents played solid games but simply could not keep up with the Hawkeyes.

This was the case for Rutgers. The Scarlett Knights didn’t necessarily play a bad game, but they were completely outmatched, especially on the perimeter.

Bohannon and Wieskamp are above-average three-point shooters as is, but when they make open shots, it opens up the floor for the rest of the Hawkeyes, who are all capable of making perimeter shots.

It’s not rocket science–when Iowa basketball makes their threes, they typically win. Wednesday was just another exhibition of this.

2) Where the heck is Ron Harper Jr?

One of the biggest factors in Rutgers’ hot start to the season was the stardom of Ron Harper Jr.

Harper was averaging close to 25 points per game at the start of conference play, torching opponents game-in and game-out. However, over the past month or so, Harper’s productivity has dropped off considerably.

His points per game average are down to under 17 points per game, and Harper has failed to score more than 15 points in each of the last five games. A small drop-off in Harper’s scoring was assumed upon the return of Geo Baker in January, but Harper’s struggles have been completely unexpected.

In about a month’s time, Harper Jr. has gone from a top-10 player in the conference to a non-factor in conference play. While Rutgers has been better as of late, they will absolutely need Harper Jr. to step it up if they want to secure a spot in the NCAA tournament.

With Harper Jr. playing at his early-season level, the Scarlett Knights are a dangerous tournament team. Without his contributions, Rutgers is just about an easy out.

3) Joe Wieskamp, not Luka Garza, will determine how far Iowa basketball will go

It’s fairly obvious that Luka Garza will be the biggest factor in Iowa’s performance every single game this season.

However, the Hawkeyes won’t go far if they rely on only Garza to carry them. This is why Iowa was so good in the early season–multiple players were viable scoring threats on a nightly basis.

Wednesday night’s game was the perfect example of Iowa playing at a high level without Garza carrying the load. Joe Wieskamp was the star of the night, as he scored 26 games on 7-of-11 shooting.

Wieskamp was Iowa’s secondary scorer last season and has thrived in a similar role this season with Jordan Bohannon’s inconsistencies. Considering that Garza is likely to draw a double-team on the majority of their possessions, the emergence of a reliable open shot-maker down the stretch is an exciting development for Iowa.

Wieskamp can take over the game at any time, which makes Iowa all the more dangerous when Garza puts up his nightly 20 and 10 double-doubles.

With Wieskamp red hot and Garza being Garza, the Hawkeyes are one piece away from being the invincible team that they seemed to be before February.