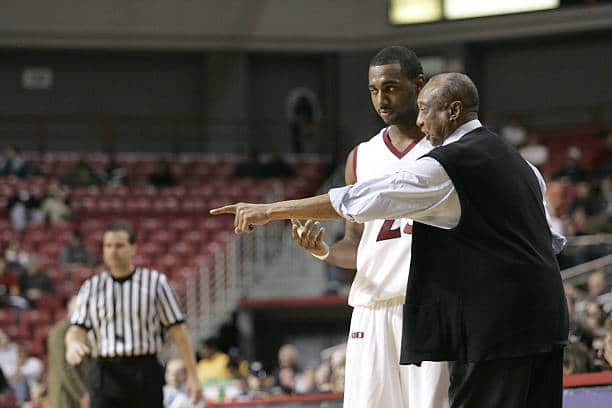 Legendary college basketball coach Jim Calhoun never faced John Chaney and Temple. But he said Chaney’s life will be remembered beyond the court.

Or reached a Final Four.

He had five chances, but each and every time his Temple owls couldn’t make it past the Elite Eight.

But it didn’t matter. On January 29, when Chaney passed away at the age of 89, no one was debating his status as one of the best college basketball coaches of all time. And that’s because when it came to Chaney, although wins and losses came first, they also came second to the impact he had on his players and the advancements he helped to make in college athletics.

“I think you’ve got to look beyond that with John,” said former UConn basketball coach Jim Calhoun. “John was a national figure.”

Of course, what Calhoun is referring to are the ‘what ifs’ and close calls throughout John Chaney’s coaching career. A winner of over 500 games, multiple Atlantic-10 conference titles, and a consistent top-25 team that ranked as high as number one in the country in 1987-88, Chaney never had a Final Four appearance to back it up.

And to put even more emphasis on what Calhoun’s words about Chaney mean, the two never even coached against each other once.

In the 1988 NCAA Tournament, Chaney’s Owls lost to Duke in the Elite Eight. The Owls had a three point lead at halftime but surrendered to a hot second-half start by the Blue Devils, who wouldn’t look back, winning 63 to 53.

Three years later, it was the 10-seeded Owls losing a close one with North Carolina, 75 to 72. This time it was Temple who needed to come back from a first-half deficit. Although Temple closed the gap and did hold a lead in the second half, it wouldn’t be enough, as Dean Smith’s Tar Heels regained the lead down the stretch and wouldn’t give it up. The Owls’ bid for a Cinderella run was cut short.

Temple basketball once again became the tournament Cinderella in 1993, as the 7-seeded Owls ran past Missouri, Santa Clara, and Vanderbilt for an Elite Eight date with Michigan. But they took a page from the 1988 team, leading by eight points at halftime, only to be outscored 50 to 37 in the second half by the Fab Five. Michigan took it by five, also taking Chaney’s best chance at his first Final Four appearance to that point. The Wolverines would eventually lose to North Carolina in the National Championship.

The 1999 Final Four was probably the least winnable game, but the Owls had a chance nonetheless. Elton Brand had 21 points and 8 rebounds to lead the Blue Devils to an 85-64 win, outmatching Temple in both halves. Duke would end up losing to Connecticut in the finals, which gave Calhoun his first championship.

The following season, Temple went into the tournament with higher expectations, but the 2-seeded Owls were upended in the Round of 32 by Seton Hall. The game took overtime, but from at least a pre-tournament expectation, it was a much earlier exit than expected.

But Temple would be back the following year, and this time as an eager 11-seed ready to make up for the previous year’s early fall. Chaney had the Owls rolling – winners of 10 straight before Michigan State ended their run, 69 to 62.

Chaney wouldn’t make another NCAA Tournament after that and decided to call it quits from coaching in 2006. But even without a Final Four appearance next to his name, Chaney’s impact was felt much more than what one win number 517 at Temple would have meant compared to his 516.

Chaney was a trailblazer – one of the few African American coaches at his time who paved a way for the Black coaches of today. When Temple hired him to be their next coach in 1982, he became the first Black coach at a Philadelphia Big-Five school. In an article by Bleacher Report in 2011, Chaney was listed as the 31st best coach in college basketball history. Among Black coaches, Chaney ranked the highest – two slots above John Thompson.

“They both walked in the same path. The path very simply is a voice for those who couldn’t be heard. They stood up for people,” said Calhoun. He added that they were able to move forward certain stances that negative people made negative, but in reality were positive outcomes.

Racial tension was still high at the time, and both Thompson and Chaney were two of very few African-American head coaches in college basketball. But both had wisdom past hoops knowledge; the type that earned other coaches’ respect, even if Chaney was a little bit hard to deal with from time to time.

But we’ve all heard about his issues. Chaney once threatened to kill John Calipari at a postgame press conference, also shouting to Calipari while being held back that, “When I see you, I’m going to kick your ass.” He often ripped into referees for bad calls and wasn’t there to coach his team lightly either. According to a New York Times article, Chaney’s practices “ritually began at 5:30 in the morning.”

Behind Chaney’s gruffness was the character of a leader and a father figure. And it wasn’t hiding behind any mask. There was a time for Chaney to be blunt and to the point and even harsh. That was on the basketball court. For those who knew John Chaney, this wasn’t his demeanor.

Calhoun said he was a “father to so many people.” Not merely like a father, but as close to a father to his players as he could get. He recruited inner-city kids to come to play for him at Temple where he wouldn’t just coach them on the court but would take them under his wing because God knows so many of them needed that. He took them under his wing and made sure they would never get stepped on. “Don’t ever mess with his kids, Calhoun said, “He’s going to mess with them. But he won’t let you mess with them.”

John Chaney fought the NCAA over certain issues – and not just with the sole purpose of benefitting his Owls, but to help the college basketball players all over the country who needed it the most. According to that same New York Times article, “Chaney teamed (with John Thompson) to protest N.C.A.A. regulations that made freshmen ineligible if they did not meet academic requirements and later made them pay their own way the first year.”

So while Chaney’s job was to coach Temple basketball, his ‘Owl vision’ went beyond it. He sought out any way to break down the racist barriers still floating around in college basketball.

According to Calhoun, “That completely, in my opinion, overrides any type of thing of whether he won a championship or not.”

Sometimes a quote like that can be a coddling way to make his impact greater, given his recent death. But that is so far from the case, and if you know Jim Calhoun, coddling isn’t exactly his way of explaining things.

John Chaney’s legendary coaching status hasn’t been coddled. He won over 500 games in just over 20 years. That’s hard enough to do, let alone with a Temple basketball program that doesn’t bring in the same type of recruits as a Duke, UCLA, or its neighbor Villanova.

By now though, it should be understood that that isn’t the point. Chaney’s greatness went beyond that and by coaching standards – whatever the sport – not many people will ever touch it.

“John was symbolic with a whole different direction of coaching. John was a guy that took a stance, said Calhoun.”

He likened him to Thompson again, perhaps because Calhoun knew Thompson best, but maybe also because Chaney’s accomplishments deserved that type of recognition for once. After all, he was the underdog’s underdog.

Calhoun said, “Their legacy is one that, in my opinion, we look back on sometimes (and) just think of the special guys we’re fortunate to have. They were brave enough and smart enough to help advance the coaching profession.”

In 2009, Temple University students brought Philly’s Ben Franklin Bridge inside to display it in an art gallery. According to Peter Crimmins, they wanted to attempt “to capture their experiences of the bridge.”

During the 1920s, it took over four years for that Bridge to be built. It’s estimated that in 2019, over 38 million vehicles crossed that bridge.

John Chaney is no physical constructor, but as Calhoun said, he “built a bridge.”

He put on his hard hat and went to work every day, laying down the foundation for that bridge. In some ways it is still waiting to be completed but has helped so many Black athletes and coaches along the way, it may be too many to estimate the number of men that have benefitted from it.