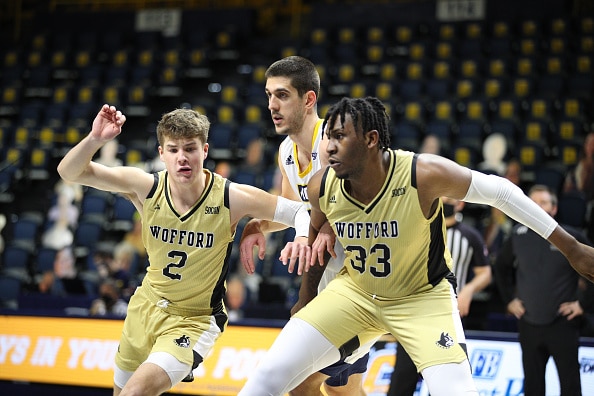 Wofford basketball earned a huge victory on Monday night, downing East Tennessee State 67-62 in a battle for first place in the SoCon. The Terriers looked like they might be dead in the water early, but clawed their way back to cut their halftime deficit to just one. The second half saw both teams go on spurts before Wofford hit some key buckets late to get the edge. That pushed the Terriers to 8-2 in league play, surging back into the conference’s top spot by the narrowest of margins.

1) Wofford survived a huge punch in the mouth early

Early on, it looked like ETSU was going to run away with this game. The Buccaneers built up a 13-point lead thanks to a Wofford drought that spanned almost seven minutes. ETSU came out strong on the defensive end early on, making the Terriers look out of sorts on offense. They were getting into passing lanes and forcing Wofford to pass around the perimeter before forcing up shots. However, the Terriers responded with their own 18-2 run, briefly pulling ahead in the process. From there, it was a back-and-forth effort.

This response was huge from a confidence standpoint. Wofford basketball has seen their offense sputter at times over the past few games. It was a major reason why they were upset by The Citadel last Wednesday. Two key guys were missing tonight in Morgan Safford and Sam Godwin, and it showed early on. It really seemed like the Terriers were trying to figure out how to play without both of those guys in the game’s first 12 minutes. However, once the three-ball finally started to fall, the basket opened up. Learning how to play with different lineups and win with them will be important as the season goes on.

While the outcome was disappointing, tonight’s game allowed redshirt freshman Damari Monsanto another opportunity to showcase his talent. Monsanto was on fire right out of the gate, scoring 11 points in the game’s first eight minutes. He finished the game with 24 points, leading all scorers from either team. He was efficient in the process, shooting 8-of-12 from the field and 6-of-9 from deep. Monsanto also finished with eight boards.

Monsanto should easily be the frontrunner for the Southern Conference’s Freshman of the Year award. The Florida native was averaging 11.3 points and 7.5 rebounds per game on the season. However, he’s been even more lethal during conference play, averaging 14.3 points and 9.1 rebounds per game. Monday marked his third straight game scoring at least 20, and he also had an impressive 23 points against Alabama back before Christmas. Monsanto is starting to come into his own, and seems like the next Buccaneer that will most likely earn a SoCon Player of the Year award before his career is over.

When the calendar flips to February, teams tend to play with a lot more urgency. That certainly felt like the case in this game. For all intents and purposes, both Wofford basketball and ETSU feel like they are playing a bit ahead of schedule this season. All of the hype surrounded Furman and UNC Greensboro, with everyone else presumed to be fighting for third place. However, the Terriers and Buccaneers have announced their presence, with Wofford already splitting with UNCG and ETSU with Furman this season.

Both teams came out and played like they had to win this game. That’s the kind of effort you expect when an NCAA Tournament bid is on the line. In one-bid leagues, that’s often in the conference championship game. Wofford and ETSU both understood the magnitude of this match-up. The result puts the top four teams in the league each with a two in the loss column. That means just 1.5 games separate one through four.

ETSU will get its chance at revenge on its home court on February 13th, but both will still have to fight their way through a tough league as well. Still, nobody would complain if the third game between these programs is on a Monday in mid-March in Asheville.