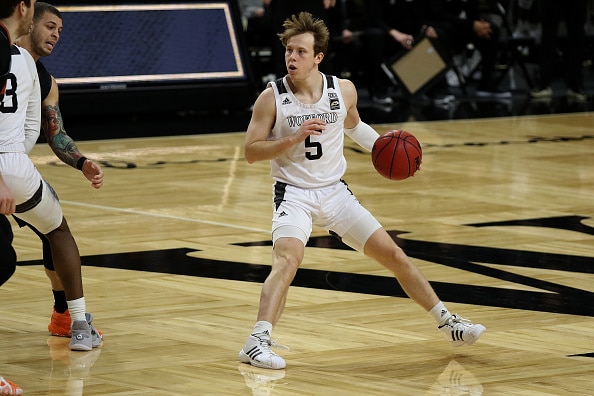 Wofford basketball rebounds from Wednesday’s loss to beat their rivals and remain thick in the Southern Conference title race.

Wofford basketball knew this was going to be a huge week. The Terriers played a makeup game this past Monday, earning a big win over East Tennessee State to take over first place in the Southern Conference. However, they blew an eight point lead lead to lose in overtime to an up and coming VMI team at home, dropping back to third place. That made today’s contest against Furman huge for more than just rivalry reasons. Both programs needed this win to keep up with everyone else at the top of the league. Wofford basketball’s 75-67 victory puts them at 9-3 in the SoCon, while Furman drops to 5-3, remaining in fourth place.

1) Wofford scraps their way to another big win

Wofford’s win in this game wasn’t pretty by any means. At times, the offense looked out of sorts, something that is becoming too much of a habit lately. Some of the passes made weren’t the best, leading to steals and easy points for the Paladins. It took the Terriers a little over 20 minutes of game time to reclaim a lead in the game, as Furman kept them at an arm’s length for most of the meat of the game. However, when crunch time hit, Wofford did what they arguably do best: hustle.

Facing a 54-47 deficit with a little over eight minutes remaining, the Terriers seemed to flip a switch. The passes became a little crisper, and bodies were flying all over the place on every loose ball and rebound. They forced Furman into empty possessions without second chances, with everyone crashing the boards. Monday seemed to have a similar script, as have a few other games the Terriers have grinded out. It may not always look the best, but Wofford’s players and coaches know how to win, and that will bode well for yet another potential run in Asheville.

2) Furman failed to use their biggest advantage: size

There aren’t many teams that Wofford is bigger than this season. The Terriers rank sub-330 in team size, with nobody above six-nine receiving a high volume of minutes. Furman may not have players who are that much larger, but with the Terriers’ guard-heavy rotation, there should’ve been opportunities for the Paladins to exploit. Furman’s offense looked its best on the night when they were driving to the lane or getting the ball inside.

However, as the game progressed, it felt like the Paladins were starting to settle for outside shots. When Wofford went on their game-changing 17-2 run, Furman was jacking up deep shots that just weren’t falling. The Paladins finished the game shooting just 12-40 from deep. Wofford leads the country in the percentage of their shot attempts that are threes. However, it was Furman who shot more from beyond the arc tonight, and that may have been their downfall.

3) Senior leadership stepped up for the Terriers

Wofford has been a big surprise this season in large part due to the youth on the roster. There are only two seniors: Storm Murphy and Tray Hollowell. Both of those guys play huge roles, but it’s how everyone else has stepped up that has put the Terriers ahead of schedule. However, when Wofford basketball needed it most in this game, it was Murphy and Hollowell who got it done. Murphy scored 24 points in this game, 11 of which came during the Terriers’ game-winning run.

Meanwhile, Hollowell finished with 11 points of his own. His biggest shot of the night came with 1:39 to go, draining a triple that made it a three possession game. Both he and Murphy were also responsible for the assists that set up many of the baskets Wofford made down the stretch. On top of that, Murphy’s ability to scan the floor helped him defeat Furman’s late pressure, including Sam Godwin‘s thunderous dunk that put a stamp on the game. The future is bright in Spartanburg, but it’s Murphy and Hollowell who will play a big role in how far this team can go the rest of the way.