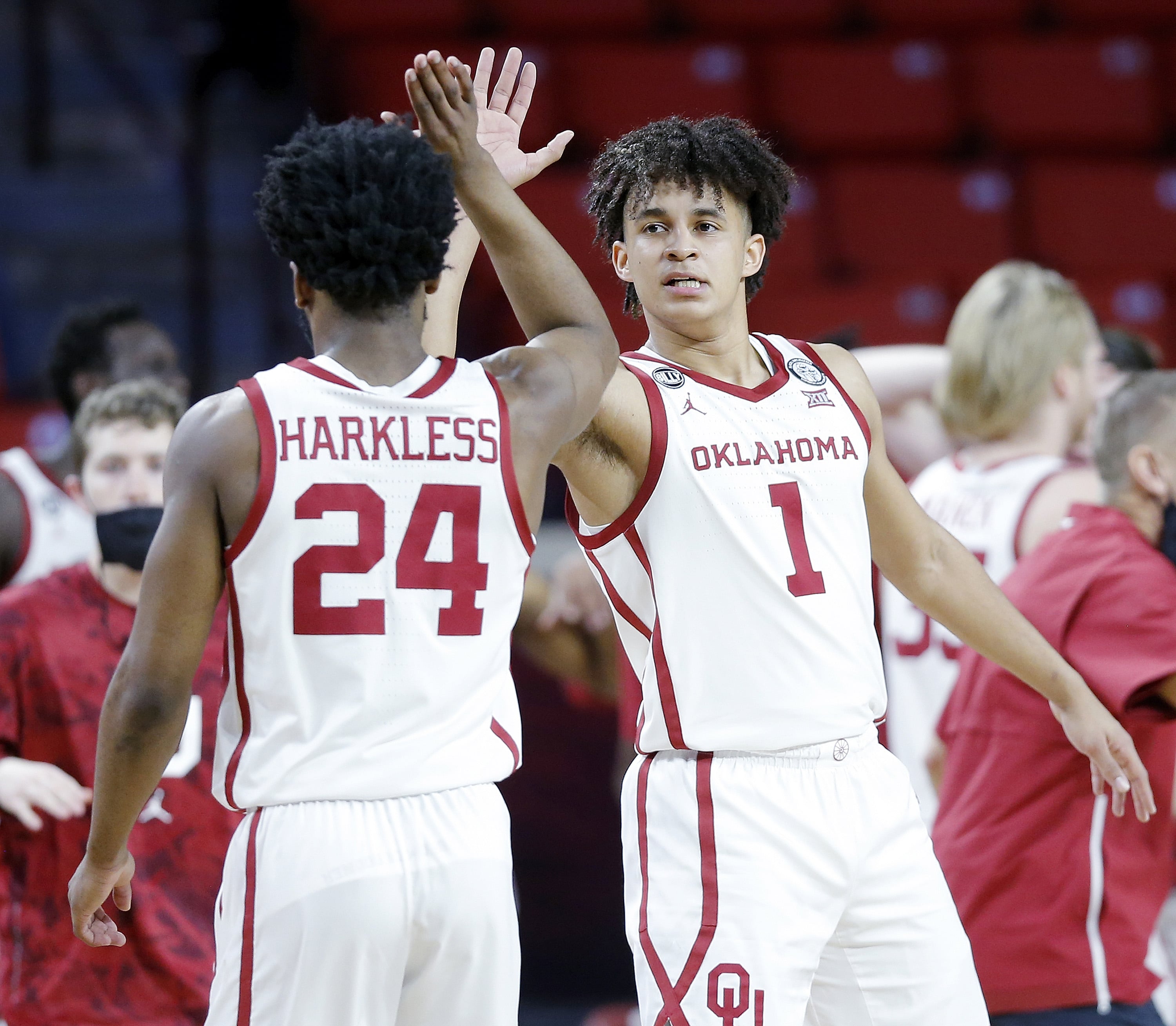 Oklahoma basketball staves off a shorthanded Texas Longhorns team to record yet another upset win.

Just days after pulling off a major upset at home against top-ten ranked Kansas, Oklahoma basketball was back in action, this time in Austin against the fifth-ranked Texas Longhorns.

Oklahoma was able to finish off another upset, holding off a Texas comeback effort for a one-point win on the road.

As Oklahoma looks to gain more ground in the AP Poll and Big 12 standings, the Longhorns will need to get things together in a hurry with an intriguing two-game stretch against Kentucky and Baylor coming up in the next week.

There’s a lot to unpack from Tuesday’s upset showdown, so let’s take a look at three takeaways from another eventful game in the Big 12.

So here’s the catch with Tuesday’s game.

The Longhorns were without head coach Shaka Smart, something that had been expected for a couple of days with his announcement that he had tested positive for COVID-19.

However, just 30 minutes prior to tip off, the Longhorns announced that they would be without Courtney Ramey, Jericho Sims, and Brock Cunningham in addition to Smart for Tuesday’s game.

Texas was left with eight scholarship players remaining, absent of their star center and perhaps their biggest shot maker in their starting lineup.

To make matters worse (this is actually to the fault of Texas), it didn’t seem as if the Longhorns were too aware of the situation. Four of those players had 3+ fouls in the first half, and by the time the final buzzer had sounded, the Longhorns literally had five players left due to foul trouble.

So, at the end of it all, I don’t think this is a loss that Texas should, or will, be judged on. Was it pretty? Absolutely not. But the hope for Texas is that they can regain those three players by weeks end, and that somehow, someway, Smart can be back on the sidelines for next Tuesday’s mammoth game at home against Baylor.

When then-transfer Austin Reaves arrived in Norman from Wichita State last season, there were split expectations as to how the junior guard would perform in a completely different setting.

Reaves had some massive ups and very low lows last season, but this season, he has blossomed into one of the better players in the Big 12 conference.

Reaves is averaging 16 points, five rebounds, and five assists on the season. On Tuesday, Reaves dropped 23 points, including several clutch free throws down the stretch to hold off the Horns.

Meanwhile, senior Brady Manek, who was expected to be the centerpiece of this Sooners squad, did not make an impact whatsoever. Manek scored one point in just eight minutes before seeing his playing time eaten up by Jalen Hill.

Manek, for a reason yet to be apparent to the general public, has seen his playing time nearly evaporate in recent weeks. Tuesday’s game was his third-consecutive game in single-digit points, but it seems as if the senior forward could be in the process of being cut out of the gameplan.

If that is the case, it will certainly be a big storyline to watch if Reaves can lead the Sooners on his back down the stretch run of the season.

Oklahoma basketball looked really, really good when they caught fire against Texas. In the first ten minutes, the Sooners came out awfully cold, then went on to score in nine consecutive possessions.

The Sooners controlled the game against Kansas and was able to do the same against Texas, which is creating a trend. When Oklahoma controls the tempo of the game……they win.

Not to mention, Oklahoma has seen a couple of players begin to emerge as rising superstars. Umoja Gibson dropped 27 points in an upset win over West Virginia a few weeks back but has proved not to be a fluke, maintaining his role as a premier scoring option.

De’Vion Harmon is starting to come along as well, as his mid-range jumper looked deadly in the first half against Texas.

Of the teams in the Big-12, Oklahoma actually matches up quite well with Baylor, especially considering how well they shoot form beyond the arc. With Austin Reaves and Manek, if he plays, being shut down by Davion Mitchell and Mark Vital, the Sooners could use a signature performance from Gibson or Harmon, two of their biggest stars of late, in order to knock off Baylor. Not likely, but I’ll go as far as to say that the Sooners have the best chance of anybody in the conference to run with Baylor.