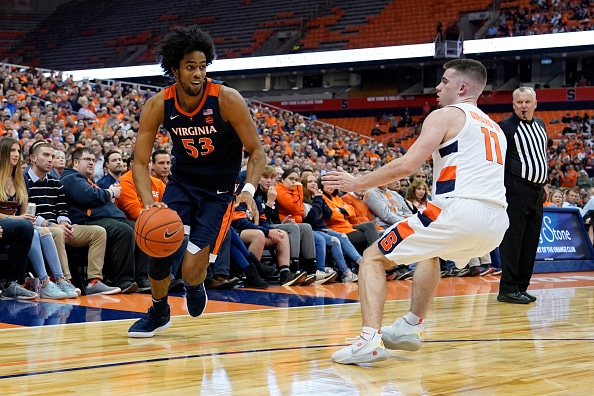 Virginia basketball continued its hot play as of late, shooting lights out en route to an 81-58 victory over Syracuse.

The Cavalier’s frontcourt shined once again, as Jay Huff and Sam Hauser combined for 42 of Virginia basketball’s points. Huff recorded a career-high 21 points, adding 12 boards for a double-double. Hauser scored his 21 off of seven made three-pointers.

Jay Huff says he was at the free-throw line with 19 points. He saw Caffaro getting ready to check in and looked at a smiling Tony Bennett. Huff joked that if he missed the first he was going to miss the second intentionally because he didn’t want to exit until he hit 20 points.

Kihei Clark did not score big points, but the now seasoned point guard totaled nine assists with only two turnovers. Virginia assisted on 23 of 59 buckets.

Despite early struggles, Virginia is finally clicking. Tony Bennett is creating better defensive schemes that fit his guys, and he now has the rotation down to a science. Reece Beekman has stepped up for Virginia, adding 10 in the contest, but more importantly, took the ball-handling role away from Clark.

As a result, Virginia basketball was able to rotate Clark, Hauser, and Huff through the middle of Syracuse’s zone and pick it apart. These types of adjustments and strategy are what makes Tony Bennett elite, and now that his players are executing, Virginia looks unstoppable in conference play.

2) Syracuse should run the press every possession

Virginia fans know it first hand: a Syracuse press is devastating. Boeheim ran the same strategy against Virginia in the 2016 Elite Eight, erasing a deficit and sending the Wahoos home early. Today, Syracuse showed signs of life with the press, forcing Virginia into bad passes and turnovers that led to easy buckets.

Why not run this all the time? It could be a conditioning issue, or Boeheim could want to set up the zone. Conditioning is a simple fix: get your guys in shape. As for the setup issue, the zone has struggled. In fact, in all but one of Cuse’s losses, The Orange have let up 79 or more points.

Syracuse is susceptible to lose to a hot-shooting team, as shown tonight, losing to Virginia by 23 on a 45% three-point effort by the Cavaliers. A press would allow for easy buckets off turnovers and force the opponent into bad shots, rather than taking a loss to a good shooting team.

3) The Packline is back

Virginia has struggled defensively, with respect to how Virginia usually executes defense. Now, the defense is playing how Charlottesville is used to. Virginia has not allowed more than 70 points in an ACC game, and have won all but one game in conference play by at least nine. Tonight, they held Syracuse to 37% shooting from the field, 20.8% from deep. The trio of Beekman, Clark, and Casey Morsell is excellent defensively, and 7-foot-1 Huff can block anything.

Tony Bennett has stopped his players from hedging screens and has incorporated more switches and rotations. This allows his players to have fewer one-on-one matchups and not rely on one player’s defense to lead the unit. As a result, the defense has consistently improved game to game, and it is safe to say the defense has reached a point that makes Bennett happy.

Syracuse looks to bounce back against NC State on Sunday, just the second game the Wolfpack have had since their shutdown.

Virginia now has its toughest test of the year, traveling to its rival and 20th ranked Virginia Tech on Saturday.