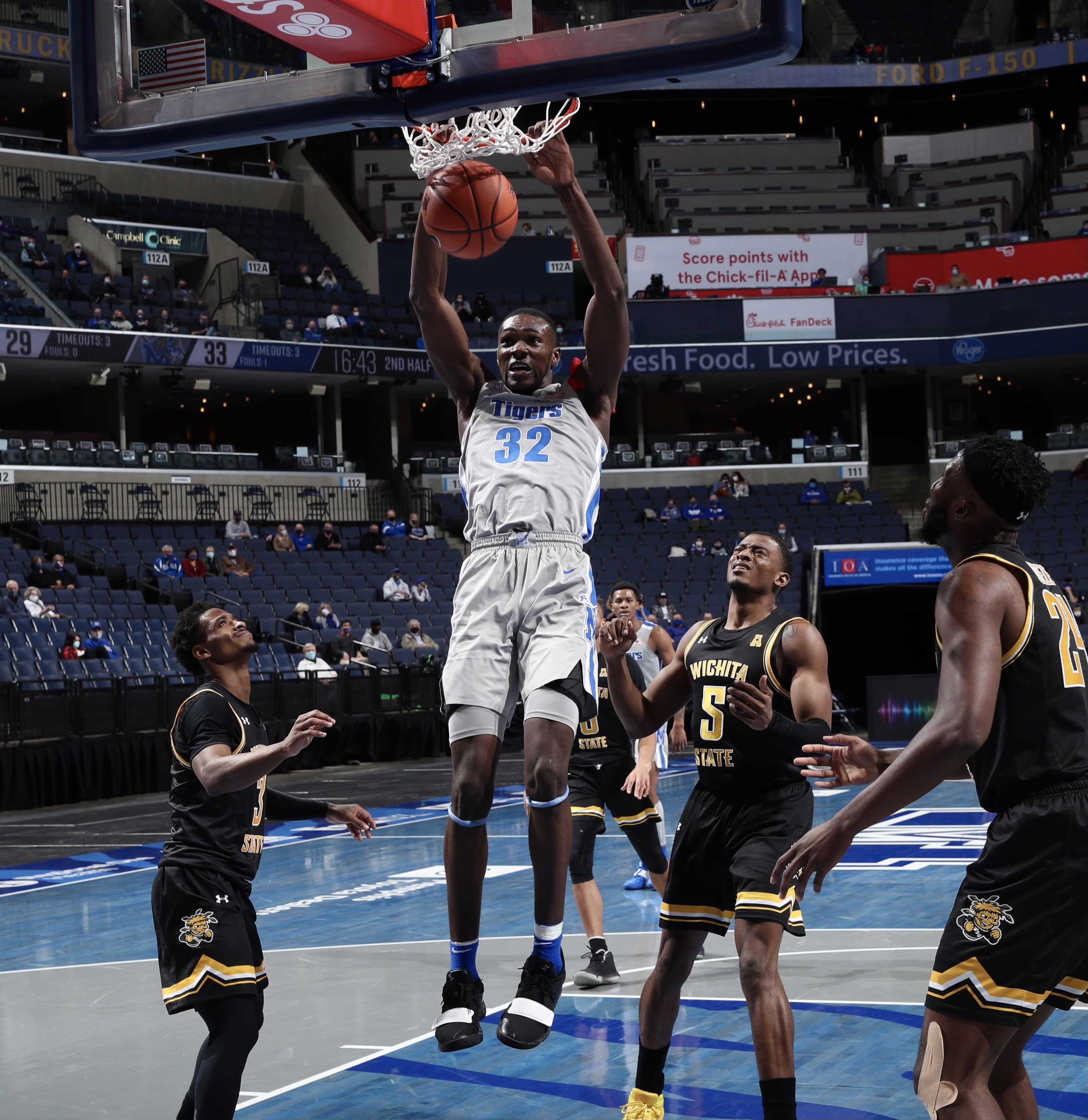 Memphis basketball silenced any doubters with an easy win over Wichita State.

These two teams were coming in, both trying to find a track. Wichita State basketball wanted to remain near the conference’s top with a win, while Memphis basketball was looking to battle it’s way back to the top half. The inconsistent play of the Memphis Tigers has been a worry for Coach Penny Hardaway. He had a lot of time off, and the Memphis team still struggled to figure out how to win.

At the half, the Wichita State Shockers shot 35 times, making only 9 of them with zero coming from three. The Shockers went zero for 12. Tyson Etienne was ice cold. Etienne could not make a shot going zero for six from the field and zero of two from beyond the arc. Dexter Dennis, Trey Wade, and Alterique Gilbert all only made one of their shots. The leading scorer for the Shockers was Morris Udeze, who made three of four from the field, he was followed by Ricky Council IV, who went two for six from the field. The inability to hit the three held Wichita State basketball to only 19 points in the first half.

Memphis pulling away with a 15-3 run.

Meanwhile, this was not the case for Memphis basketball. IThe leading scorer was Landers Nolley II, who made both of his 3-pointers. He scored 8 points, going three of five from the field. D.J Jeffries and Damion Baugh followed with five points apiece. Four of the Memphis Tigers were perfect from beyond the arc in the first half. Nolley, Jeffries, Baugh, and Alex Lomax made his first 3-pointer of the year, and it was his only half. The Tigers held the lead, scoring 25 points in the first half, shooting 66.7% from three and 32.1% from the field.

This seems to be an issue in the American for every team except for the Houston Cougars. Wichita State basketball was so stale in the first half. There was limited ball movement. The team struggled to score from everywhere. The selfish team play seemed to be matched by Memphis basketball. Memphis actually had more assists than the Wichita State Shockers in the first half. The Tigers had eight assists to the Shockers five.

Both teams were trying to score in transition, which is great, but ball movement was vital for Memphis’s success in the first half. Wichita State basketball needs to bounce back from the first half and start moving the ball. Taking this talented Memphis team one-on-one is not how to win. The Shockers could not figure it out the second half. Wichita State basketball added only three assists in the second half. Meanwhile, Memphis basketball catapulted past the Shockers ending with 22 assists. This is what won the game for the Tigers.

This was also a huge issue in the first half for Wichita State basketball. The team was rushing the shot, driving into the lane without a plan, and then forcing shots. The Shockers only had 6 turnovers, with one being a steal, but the Tigers were credited with five blocks. I believe that these should have been steals as the poor shot selection for Wichita State basketball was a surprise.

This continued into the second half of play, as at one point, Gilbert drove the ball had four people surround him. He, instead of kicking it to someone behind the arc, did a fadeaway in the lane. This was the epitome of the Shockers game as they could not figure out how to score. The team shot 29.4% from the field and 8.7% from 3-point range. These two numbers are atrocious but really showed how bad the decision making was.

Memphis moves to 4-0 this season in games where Moussa Cisse scores in double figures. Even if Tigers don't have an NCAA Tournament resume, they're a potential bid stealer in March. Talent on top of talent.

In my earlier coverage of Memphis this year, I brought up how the offense was changed and that the Tigers needed to learn how to use Moussa Cisse. In the second half, Memphis basketball made the change to contribute to Coach Penny Hardaway. Hardaway may have finally realized it seeing the big men for Wichita State basketball struggling to defend and easily being towered over by Cisse.

Council IV with five straight for us.

The second half was dominant for Memphis basketball. The big story was the complete shutdown of Tyson Etienne, who made one of his twelve shots from the field and missed all five of his 3-pointers. Dennis struggled again on offense making only one of eight shots from the field and missing all four of his 3-pointers. The two 3-pointers came from Gilbert and Trey Wade. The best player for the Shocker was the freshmen, Ricky Council IV. He ended the game with 13 points and seven rebounds.

Cisse with 12 PTS in eight minutes, and he’s making a major impact on both ends of the floor.

Memphis basketball had four players scoring double digits. The leader, of course, was Landers Nolley II. Nolley scored 16 points, had 7 rebounds and 3 assists. Cisse was another. The other two were DeAndre Williams finishing with 10 points, 3 rebounds, and 5 assists. The other was a surprise to everyone in Alex Lomax. Lomax made his first two 3-pointers of the season. Lomax ended the game with 12 points, 4 rebounds, 6 assists, 1 steal, and 1 block.

Memphis basketball travels to ECU for a Sunday game, January 24, 2021. If Coach Penny continues to make the changes, this should be an easy game for the Tigers. Wichita State basketball had its Sunday game postponed against USF. Their next game is Wednesday, January 27, against the CincinnatiBearcatss. Coach Isaac Brown will have to figure out some issues between now and then. I am sure he is thankful for this extended time off.