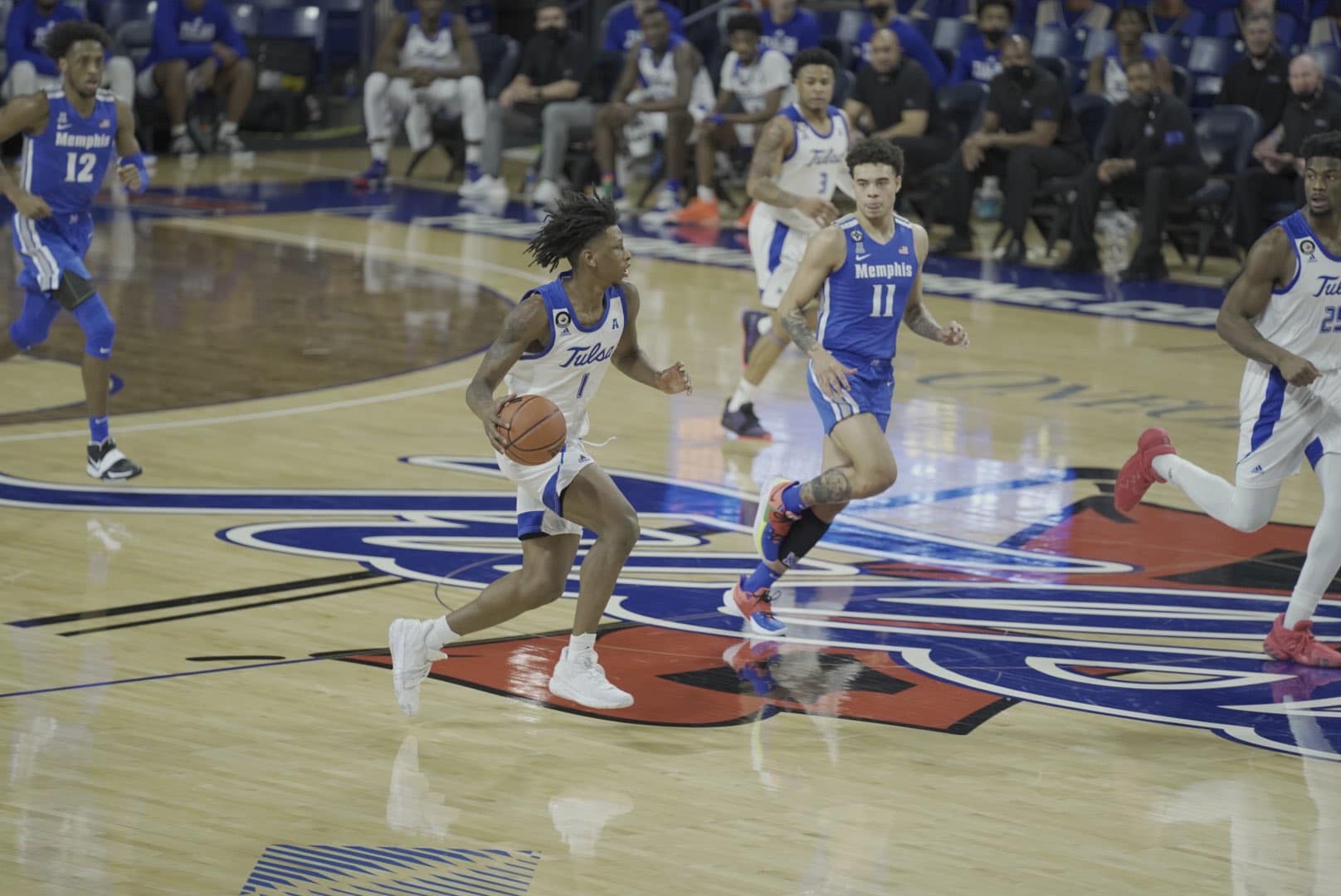 Tulsa basketball swept Memphis, squeaking out a win today, 58-57. The team’s maturity was a huge help as Elijah Joiner and Brandon Rachal came back in the second half to lead their team to a win. Joiner scored 12 of his 16 points in the second half. Rachal followed closely with 12 points, 2 steals, and 1 assist. This is the Memphis Tigers’ first game this year, after they had 19 days to practice as their games had been canceled due to the COVID-19 protocol.

This is both good and bad. Not having the experience and maturity, Memphis basketball does not have a lot of game time experience as a team. The positive for the Tigers is that this time allowed the team to bond more and got the extra weeks of practice the team missed due to COVID-19. Coach Penny Hardaway is trying to lead this group of guys to find a different way of winning than it did in his previous years with successful big men.

The downfall was the struggle to score from three for Memphis and the youthfulness of the club. As for Tulsa basketball, this team is coming back for vengeance after a difficult loss to the Wichita State Shockers. To remain near the conference’s top, Tulsa needed to win this game going into the Houston Cougars matchup.

Up Next, Thursday vs Wichita State ESPN2 6pm#GoTigersGo | @autozone pic.twitter.com/y7oXyB371y

In the first half, a total of 20 turnovers happened between the two teams. The turnovers were expected as those two teams are some of the best defensive teams, especially in the American Athletic Conference. Tulsa basketball turned the ball over 11 times, with six of those turnovers being steals by the Memphis Tigers. This is an area that really hurt the Tulsa Golden Hurricanes.

The new offense seems to have really helped the Memphis Tigers. The team shot 50% from the floor. While the team shot 22% from the 3-point range, most of the Tigers’ looks were wide open and really good. The Tigers also were extremely successful in putting the ball back. The Memphis men’s basketball team were the more ball hungry team as the team sat down low and were very active in the paint. Malcolm Dandridge dominated the paint and really showed his maturity over Moussa Cisse.

His body control and understanding of the offense allowed Memphis to be successful on offense. Dandridge kept Memphis in the second half game, scoring eight points in the first ten minutes. However, he was taken out of the game and never to be seen again. I am not sure what happens here, but Coach Hardaway clearly had a plan and managed to only lose by one. Unfortunately, Tulsa basketball sweeps Memphis despite the work that Coach Hardaway is clearly doing.

The thing that kept Tulsa basketball in the game was their ability to drive the ball. The team drove the ball and got to the free-throw line in the first half 14 times. This allowed them to go into the half only down six points. If Tulsa had made all of the free-throws, it would have been tied at the half. Beyond that, it meant that four of the Memphis Tiger players had two fouls going into the half. This remained a constant for Tulsa basketball, making it to the free-throw line 26 times. The Golden Hurricanes need to work on their free throws. Still doing well, I would have liked them to be closer to 75% in free-throw shooting.

Putting the team in foul trouble, the Golden Hurricane was able to be the aggressors and really force the Tigers into tough situations. As mentioned in the previous section, Tulsa was not aggressive in getting to the ball. The team was not putting bodies on the Tigers or swarming to the basket when the shot is up. The defense is usually fairly aggressive, but it can be taken advantage of as Tulsa basketball seemed to stop playing defense when the ball goes up. With less than five minutes in the game, Coach Frank Haith seemed to get into the team’s head to focus on rebounding. Tulsa was able to find a putback and keep the Tigers to a single possession. Tulsa needs to continue to make the right changes, and it will continue to have success in the AAC.

Houston has won 83 games in the past three years.

Tulsa basketball sweeps Memphis and will go to Houston to sweep the 11th ranked Houston Cougars on Wednesday, January 20, 2021. The second half Tulsa team will need to show up to defeat this Cougar team that has shown to be the lone front runner for a spot in the NCAA Tournament. A win against the Houston Cougars could give Tulsa a solid shot at making it. Memphis will take on Wichita State Shockers in Memphis on Thursday, January 21, 2021.  This will be another tough matchup for the Memphis Tigers in the team’s first meeting. The Shockers have started preparing for Memphis early as their game against SMU was postponed due to Covid 19 protocol.