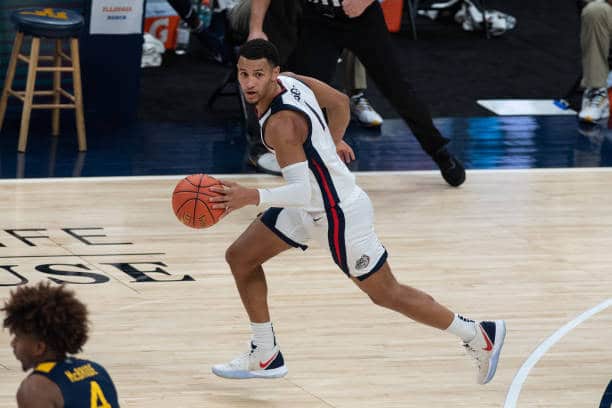 Is it finally the year of the Zags? KREM’s Karthik Venkataraman explains why Gonzaga basketball has it all.

Gonzaga basketball is 7-0 with four top-20 wins and sits atop the AP Top 25 poll. The Zags have two 20 points per game scorers, and that doesn’t include potential lottery pick, Jalen Suggs. The Bulldogs are in the midst of their best season in program history, and that includes six 30-win seasons and a national championship appearance in 2018. KREM’s Karthik Venkataraman covers Gonzaga basketball and says they are the team to beat in college hoops.

Venkataraman highlights the Zags’ ability to score the ball above all else. “They’re blowing most of these teams out. West Virginia was their only close game. In that game. They didn’t have Jalen Suggs for a lot of it because he’d gotten injured and then eventually came back in,” Venkataraman says.

Of the seven wins Gonzaga basketball has this season, six of them have been by double-digits, with three of them by 20 or more points. But to Venkataraman, it’s even more impressive that they’re doing this to really good, defensive teams. Virginia, who is known for its defense, allowed 98 points to Gonzaga, the first 90-point game Tony Bennett has allowed since 93 against North Carolina in 2013.

Venkataraman says this high scoring offense has been in part due to the unselfishness of the players, which coach Mark Few has often said in postgame press conferences. “He just keeps talking about how this team always seems to know where their other players are,” says Venkataraman, “The ability to come off ball screens, find themselves open, make the right pass, I think it’s harder for them not to score because it’s just how efficiently they’re running their offense.”

Right now, Gonzaga basketball is third in the country in offensive efficiency, according to teamrankings.com. But it’s only getting better – they’re second over the past three games, and against Virginia, they had one of the best showings of any team this year – against that pesky Cavaliers defense. Not a fan of the real deep analytics? The Bulldogs are tied for second in the country at 95.1 points per game with Iowa, a team they beat, 102 to 90.

The potential to improve is still there too. The main core of Mark Few’s 8-man roster consists of two freshmen, two sophomores, and two other first-year transfers. So while the team seems to be clicking on all cylinders, there still could be an extra jump the Bulldogs can take, which should be scary for the rest of college basketball.

But on the other side of the ball, questions still loom over Gonzaga’s ability to defend. The Bulldogs have allowed 80-plus points in three games so far. Venkataraman does bring up an interesting point, saying they know when they have to turn it on defensively. “It seems like every single time they play a major opponent, they know when to switch the defense on,” says Venkataraman.

The Bulldogs held Virginia to 75 points and Auburn to 67 – two of their three best defensive efforts on the season – and both quality opponents. And with the majority of their non-conference slate over, the focus will turn to an easier WCC schedule, where Few can really get his guys going more consistently on defense.

Venkataraman ultimately thinks Gonzaga basketball can come out on top because of all their stars and playmakers. He says, “They’ve got so many weapons on their team that can hurt you any given night. You’ve seen Jalen Suggs. Drew Timme and Corey Kispert any given night can go off for 25 or 30 points. No other team in the country can do that.”

He also mentioned Joel Ayayi and Andrew Nembhard as guys who fly well under the radar but makes a ton of plays and shots and make Gonzaga basketball so tough to defend.

“Zags got dudes,” Venkataraman says, showcasing the saying that has come to fruition in Spokane, Washington. 2020 is the year of the rat according to the Chinese Zodiac. But in college basketball, it’s looking like the year of the Zag.