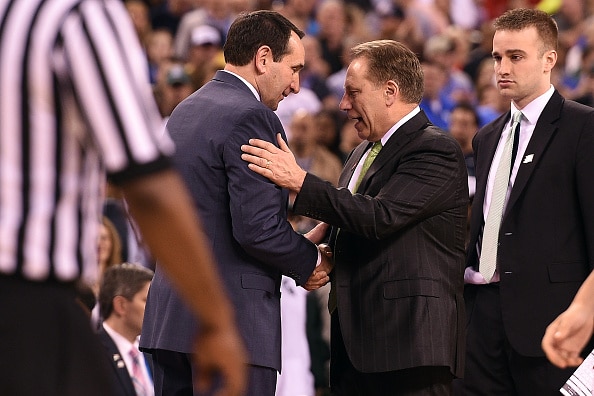 Michigan State out scored Duke 28-15 in the final 10 minutes of the first half en route to grabbing a quality 75-69 win. The Spartans trailed by 10 early in the first half, but exploded late in the half and kept the momentum to hold a double digit lead most of the way.

Duke began the game on a 13-3 run, highlighted by four early free throws by Wendell Moore Jr. A late first half run by the Spartans gave Tom Izzo’s squad a four point lead at the break.

Michigan State began the second half with a 14-3 run, gaining a 14 point advantage over its blue blood counterpart. The Spartans would then lead by no less than nine until 37 seconds remained and Duke was in desperation mode.

Duke gave a final surge at the end of the second half, cutting the lead to as little as five while hitting three three-pointers in the final minute. However, Michigan State’s already commanding lead left no opportunity for a miraculous comeback for the Blue Devils in their home confines.

The Spartans shot 4-17 in the first 10 minutes of action, making just one three point shot. In the final 30 minutes, Michigan State shot 50% from the field with four shots from deep.

Rocket Watts led Michigan State in scoring, putting up 20 points in just 25 minutes played. Joey Hauser, a Marquette transfer, added 11 points and 10 boards, while Malik Hall posted a double-double of his own off the bench with 10 points and rebounds. Five Spartans scored double figures, including two off the bench.

For Duke, Matthew Hurt led the way, scoring 21 and adding 14 boards in his new role as a starter. Jordan Goldwire added 10 off the bench in 26 minutes played.

Michigan State looks ahead to Detroit Mercy and Western Michigan this week before it travels to Virginia for its second marquee matchup with an ACC powerhouse. Duke will look to bounce back against Bellarmine and Elon before it is tasked with facing arguably the best duo in the county when it hosts Illinois next Tuesday.