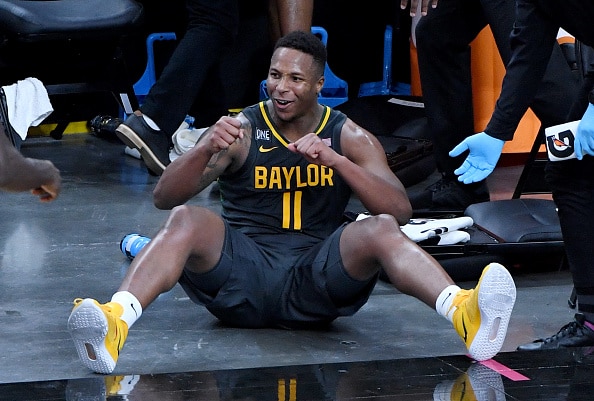 A defensive battle from the start, Baylor and Illinois lived up to the hype of a top-five college basketball showdown from the opening tip. Baylor basketball used its defense to spark a 0:30 7-0 run to extend its lead to 63-51 after an Ayo Dosunmu 3-point basket had just cut the lead to three. Baylor then pushed ahead even more and extend their lead to 16 which was too much to overcome for Illinois as Baylor defeated Illinois 82-69 for the first time in school history.

In the first half Baylor and Illinois traded baskets and turnovers as both teams seemed to be executing as well as they could on the offensive end. Neither defense was making it easy, but both were finding ways to score. Illinois looked the best in transition. When they beat the Bears down the court the Illini finished the play. However, they were pushed to the limit as their offense was forced to shoot in the final seconds of the shot clock multiple times. Adam Miller stepped up and hit big shots for the Illini when Baylor forced a difficult shot. Giorgi Bezhanishvili was everything Illinois needed to stay in the game finishing the half with 13 points, two shy of his season total through three games.

Baylor’s defense made things very challenging. The Bears forced eight turnovers with five steals and they held Illinois’ leading scorer, Ayo Dosunmu to just three points, shooting one of six from the field. That defensive presence fueled the Bears offensive game. Baylor spread the ball around as all but one player who logged minutes in the first half scoring. Jared Butler led the way with 10 points and Adam Flagler added seven. A late basket by Baylor gave them a 31-30 lead going into the break after a first half that saw no one lead by more than five points.

The second half was much of the same as Baylor’s maturity and defense were seen on the forefront. Baylor made things extremely difficult for Illinois on offense holding the Illini’s three leading scorers to 29 points on 11-33 shooting. More importantly, Baylor answered every run and momentum swing that Illinois had.

Early in the second half, Illinois took a 39-37 lead after a 5-0 run which forced a Baylor timeout. Baylor immediately answered with a Mark Vital layup straight out of the timeout and the BEars were off to the races. Illinois looked to have stopped the bleeding after Trent Frazier banked in a 3-point basket to cut Baylor’s lead to three but Baylor responded with a 7-0 run ultimately pushing their lead to 16.

The Bears used a complete team effort outsourcing Illinois 17-8 in points off of turnovers. With all eight players who entered the game scoring and four finishing in double figures. Baylor is now 54-5 after leading at the half in the last four seasons.

Adam Flagler led the way for the Bears with 18 points. Davion Mitchell, MaCio Teague, and Butler finished with 15, 11, and 12 respectively. Jonathan Tchamwa Tchatchoua, Mark Vital and Matthew Mayerall provided and contributed with the energy and hustle plays that led to easy baskets for the Bears.

Next up, Baylor will play #1 Gonzaga on Saturday, December 5 before hosting Nicholls State on December 8. Illinois schedule won’t get any easier either. They host UT Martin on December 5, before hitting the road to play at Duke followed by a trip to Missouri before they start Big Ten play.