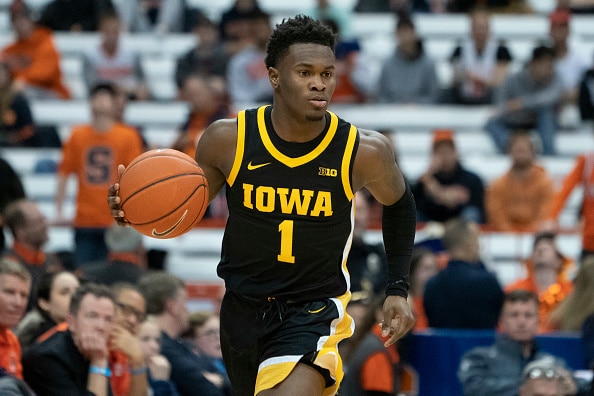 Iowa basketball is entering the season with high expectations. Luka Garza is returning as a preseason favorite for the National Player of the Year. He is expected to help lead the Hawkeyes to compete for a Big Ten basketball Championship. Iowa basketball is expected to be a preseason top 10 team in the AP poll for the first time since 2001 when they came into the season ranked ninth. They are looking to make their first Sweet 16 since 1999 and their first Elite Eight and Final Four since 1980, with the great late Lute Olson.

It has been an unusual offseason, so how has the team been able to prepare together and really focus on the upcoming season while still building the camaraderie and chemistry the team has had in previous years?

It’s been a weird offseason and we’ve all been wanting to get back together since the pandemic. It’s been getting worse and worse, but we made a team decision to stick together, focus on what we can focus on, control what we can control, and get better each and every day that we are with each other. Keep the mindset of staying focused, tunnel vision, and just things that will help us accomplish what we want to accomplish this year.

What has been the focus for Iowa this offseason? What is the team looking to do to continue to improve on and things that you really want to do as a team this year?

First off it was just staying healthy. Doing the right thing to keep your body in shape. Doing everything to keep your mental right, get your health straight. Whether that’s sacrificing going out somewhere, or going out to eat, or going to your friend’s house that’s not on the team. We had to sacrifice a lot and we are all willing to do that to get where we want to go. From a basketball standpoint, it’s just getting to the gym. Everybody’s working on their own game at their own time. Everybody’s just putting in the work, the extra time before practice, after practice, off days. Everybody’s just ready to work.

Last season Iowa ranked 5th in the nation and first in the Big Ten according to Ken Pomeroy rankings and offensive efficiency, how does the team take the next step to be even better on the offensive end this season?

We all know we’re going to score. We have a really good coach in Coach Fran, and the offense, his offense is amazing for all of us. For all of us to create our own shots, shots for others and we know we’re going to score. Our main focus point is on defense. I will always tell the team we will score off the defense. We should thrive on getting stops and stuff because basketball will come easier if we get stops.

The defense was where the team was let down a little bit last year, 97th in KenPom, and 12th in the Big Ten, where’s the focus this year for that defense what are the Hawkeyes looking to do in order to improve that?

We are definitely looking to improve. We have a lot since last year and to be honest, it’s just being focused. Paying attention to detail. Just the simple and the little things. Everybody plays defense, everybody can play defense, but it’s the teams that focus on the little things that make them become great.

It’s a great team returning. All five starters are returning. Jordan Bohannon and Jack Nunge are coming back from injury who were both starting when they went down. How has that dynamic been for this team this year and how have you been able to work together and essentially have seven starters coming back this season?

Coach said at one of our first meetings we had this year that coach never had a team with seven starters back. You know, it’s going to be tough. We’re all fighting for minutes, but to be honest, we’re all content with what happens, happens. We’re all rooting for each other. We’re never hating on each other, we’re never standoffish to each other. Everybody knows their role, everybody knows what they can do, and that’s the best part about this team. Nobody’s selfish, nobody is self-centered, we’re just a great collective group of guys who just want to win.

What would you say the greatest strength of this team is going to be this year?

.@MattNorlander ranked EVERY team in college basketball. It starts like this:

You’re coming into the season in many people’s top 10 in preseason polls. You’re one of the favorites to potentially win the Big Ten this year and its unfamiliar territory for the Hawkeyes. What’s that feeling like for this team and how is the team handling the pressure and what’s the focus going into the season and the message that you guys are trying to send?

We still have the same mindset as last year. We’re still the underdogs. We’re still working for each other, we’re not working for anybody else. We’re looking to be great for each other. We play for each other, we don’t play for anybody else. We don’t play for the crowd, the rankings, or all the outside stuff. We play for each other, and at the end of the day we always have each other and these are the people we’re going to fight for. If we wanna accomplish what we want to accomplish, we all know we have to have each other’s back. I would say, it’s really no pressure for us. A lot of people may say it’s our first time in a long time doing it, but we are all still hungry. We all still feel like we were doubted. We still have that same hunger from last year, that same grit. We didn’t get a chance to play in the NCAA tournament and we are all carrying that over to this year.

Who would you say is going to be someone that we should really be looking out for this season. We know you guys have Luca, he’s a preseason All-American favorite but who someone under the radar who’s going to really step up to really help this team out?

What should we be expecting from Iowa this year?

You should definitely expect us the score of the ball a lot but our main focus is back on the defensive standpoint. We’re looking to make a big push on defense. That’s our main focus in every single practice, every single day, and that’s just the way it’s got to go if we want to accomplish what we want to accomplish. We have to pay attention to our details on the defense, never give up on a play. Stay locked in, stay disciplined on the defensive end and the offense will just come to us.

You keep mentioning getting to where you guys want to accomplish, what is that? What is the goal for the Hawkeyes this year?

Every team’s goal is to win a National Championship. Not a lot of teams put the work in, but I feel we have a really great chance because we have a lot of really good players who put the work in. We’re all disciplined and we’re all locked in on the same thing. First off, we’re looking to win the Big Ten championship, we’re all locked in on that. When the NCAA Tournament comes around, we’ll definitely be looking forward to that Final Four, that Elite Eight, that Sweet 16, that championship game. But, for right now our goal is to win that Big Ten championship.

We’ve seen professional sports comeback, we’ve seen some college sports playing and there has been a lot of interruptions within the season. With all these high expectations the team has and so much unpredictability coming up within the season, how are you guys staying prepared and focused, with the possibility of so much changing?