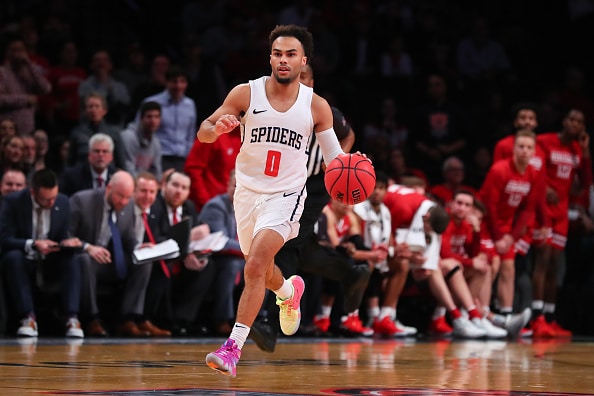 Jacob Gilyard is a senior point guard for the Richmond Spiders. Gilyard helped lead Richmond basketball to a 24-7 (14-4, A-10) record in 2019-2020 after only winning a total of 25 games in the previous two seasons combined.

Gilyard was named to the 2018-2019 Atlantic 10 all-defensive team and to the second-team all-conference as a sophomore. In his first two seasons, Gilyard totaled 868 points, 290 assists, and 177 steals. Since 1992, the only other D-I players to reach those totals by the end of their sophomores seasons are Jason Kidd and Allen Iverson.

In his Junior Season, Gilyard earned first-team all-conference honors and was selected the Atlantic 10’s defensive player of the year. He was one of 10 semifinalists for the Naismith National Defensive Player of the year and led all of Division I players with 3.2 steals per game. Gilyard was named to the Bob Cousy Award watch list for the 2020-2021 season.

Richmond basketball returns with all five starters and the team’s top returning scorers to a Richmond team that finished the season 12-3 in their last 15 games. Richmond basketball is poised to make a run for both the Atlantic 10 regular and conference tournament titles. Ranked 16 in my preseason top 25 and 28th in CBB Reviews preseason top 100. Richmond is a very likely NCAA tournament team with an exceptional chance to reach the Sweet 16 for the first time since 2011. The Richmond Spiders are a team to watch this season, especially in March as they can be considered a dark horse to reach the Final Four.

It’s been really crazy overall. I think with all the uncertainty and confusion of what you can do and what you are trying to do, but I think personally I just tried to prepare like I do every offseason. Prepare like I’m going to play as soon as I can. Just trying to stay in the gym as much as I can and study film as always. As a team, our chemistry is kinda there. The way we finished off last season we really started to hit out stride, so I think we’re already going to be there. Just making sure we are not complacent. I think the biggest thing for us is to try and stay hungry. For us to have two bad seasons and then to have the season we had last year and not make the tournament I feel is keeping us hungry. I think that’s the biggest thing, just to stay motivated.

You momentarily had your name in the NBA draft, What was that process like? Why did you decide to return and what were you able to take away from it?

I think I had always planned on returning. It was kind of different because of the whole virus. I learned a little bit, things that I can definitely improve on for sure to help myself get better and prepare for an opportunity after college. Overall, it probably wasn’t the best. Just because I wasn’t able to get workouts and wasn’t able to show that I am at the level of competition of an NBA player.

You are an outstanding point guard. You were named to the Bob Cousy Award watch list. You do it all, you facilitate, score, you are a solid defender, what role as a point guard resonates with you the most?

Just trying to be a leader and making sure everyone else is on the same page. Basically, doing whatever it takes to win. Growing up I watched a lot of Chris Paul. He can score, but he was always trying to make plays for other people. He was the ideal true point guard that I watched growing up and I think he’s one of the best true point guards I’ve ever seen. Just watching him, showed me that being a point guard is about doing anything to help your team win no matter what it is even if you have to sacrifice a little bit for the greater good of the team.

Richmond basketball is returning all five starters, its top five returning scorers, and basically the entire roster from last season. What can we expect from Richmond this season?

Big things! Kind of like last year towards the end of the year, we really started to hit our stride. So we can definitely do big things this year. We have seen the Richmond team that made it to the Sweet 16 and we think we can do that. We think we are just as good as that team was. We are optimistic about the season, I think we can be really good and as long as we get better each and every day, I think the skies the limit for us.

What is the goal for Richmond basketball this season?

Richmond basketball is picked by many as the A-10 preseason favorite and is being ranked in many preseason top 25’s, what’s it going to be like to for you and how is the team going to be able to handle going into the season with this target on your backs?

It’s going to be way different. Last year, I think we caught a lot of people by surprise. I think we knew we would be good, but I don’t think other teams knew we would be good. So it’s going to be different. This year we are going to get everybody’s best shot so we have to come out prepared. Just getting better each and every day. The goal is to not compete with other teams but to compete with ourselves. We know what we are capable of, we think we are better than most teams so as long as we can come in and compete with ourselves I think we will be able to win games.

It’s basically impossible, to be honest. Everybody’s worried about if it’s going to be canceled, about our games because everything is so different. I think the only thing you can do is trying to control what you can control. We can control going out and practicing and working hard every day. Even if something is going to get canceled we have to prepare like it’s not. We have to prepare like that games are going to happen, like next week we are going to be playing games and stuff like that. I think we just have to prepare to be ready to play like everything is normal because if you don’t and things are normal then things aren’t going to go your way. The biggest thing is just trying to stay prepared no matter what.

What has the Richmond basketball program and coach Mooney meant to you over the years that you’ve been there?

A lot. Words probably couldn’t describe it. Coach Mooney is my guy. I think that’s the easiest way to describe it. We are like a big family, our program is so close and the relationships that we have with the coaches is incredible. It’s something that I don’t think everybody else gets at different programs. It’s a big family, to say the least.

How have you grown because of Richmond, both as a player and individually in life?

I think that’s the biggest thing about this program, they are not just looking at you as a player, they are looking at you as a young man and trying to develop you into the person that you want to be. I can say confidently, that the person that I came in as four years ago is not the same person that I am today. Whether I have learned lessons on the court or off the court, I think the coaches have had a big part in that and my teammates as well, just helping me mature and become a better person.

What advice would you give somebody working towards playing Division I basketball?

Stay calm, and just keep working hard. As far as preparing for a season you have to prepare for everything. Stay calm and keep trying to get better. At the end of the day, people are going to find you if you put the work in.