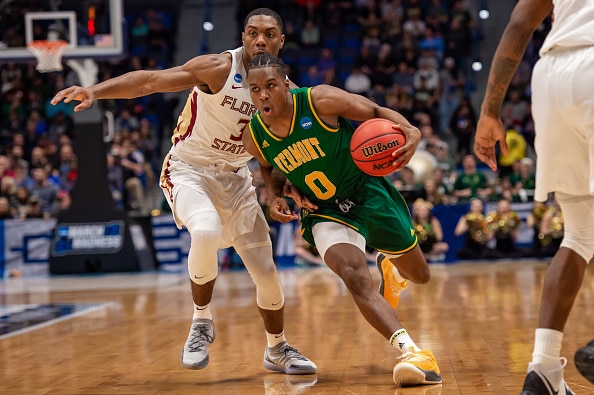 Vermont guard Stef Smith is back for his senior season, but his mark will not only be made on the stat sheet. This season, he was named one of three captains for his team, and is ready to continue being a leader, as well as putting up big numbers.

Last season, the COVID-19 pandemic shut down the America East conference tournament just before Vermont faced off with Hartford in the championship. “We felt good going into the finals, we were riding our momentum and our offense was finally clicking,” said Smith. “It was tough, because all of our time and effort was taken away.”

Vermont loses a lot of senior talent from last year’s squad, including NBA Draft prospect Anthony Lamb. As a result, Smith and his teammates are tasked with a more demanding role, which is something he does not doubt he can do. “We’re not too worried about filling the void,” Smith said, “Guys really embrace their roles here and will step up when needed.”

Individually, Smith is tasked with being a high-volume scorer as well as a leader, but he believes defense is key to success this season. “As a leader, I want to emphasize on-ball defense, and sustain our culture off the court.”

Smith has always been a leader, going back to high school, but he said leadership from previous captains on Vermont have helped him grow and understand the culture. “Playing behind Trae Bell-Haines, Anthony Lamb, and the Duncan’s helped me a lot.”

Despite being named one of three captains, Smith knows it cannot be only him taking charge. “We want to have multiple people step up, regardless of whether or not they are a captain or what class they are in.” Smith also emphasized the need for someone in every class to step into a leadership role to keep the culture for years after he is gone.

After this season, Smith is unsure if he will return to Vermont for a fifth year. However, he does have aspirations of playing in the NBA or professionally. “It has always been a dream of mine to play in the NBA.” After his playing career, he hopes to one day own his own gym or fitness center.

This season, Smith hopes to lead Vermont to another conference championship and make a run in the NCAA Tournament. He hopes his combination of leadership and scoring ability will take him to the next level, but he knows that to succeed this season, there must be contribution from the whole Vermont roster.