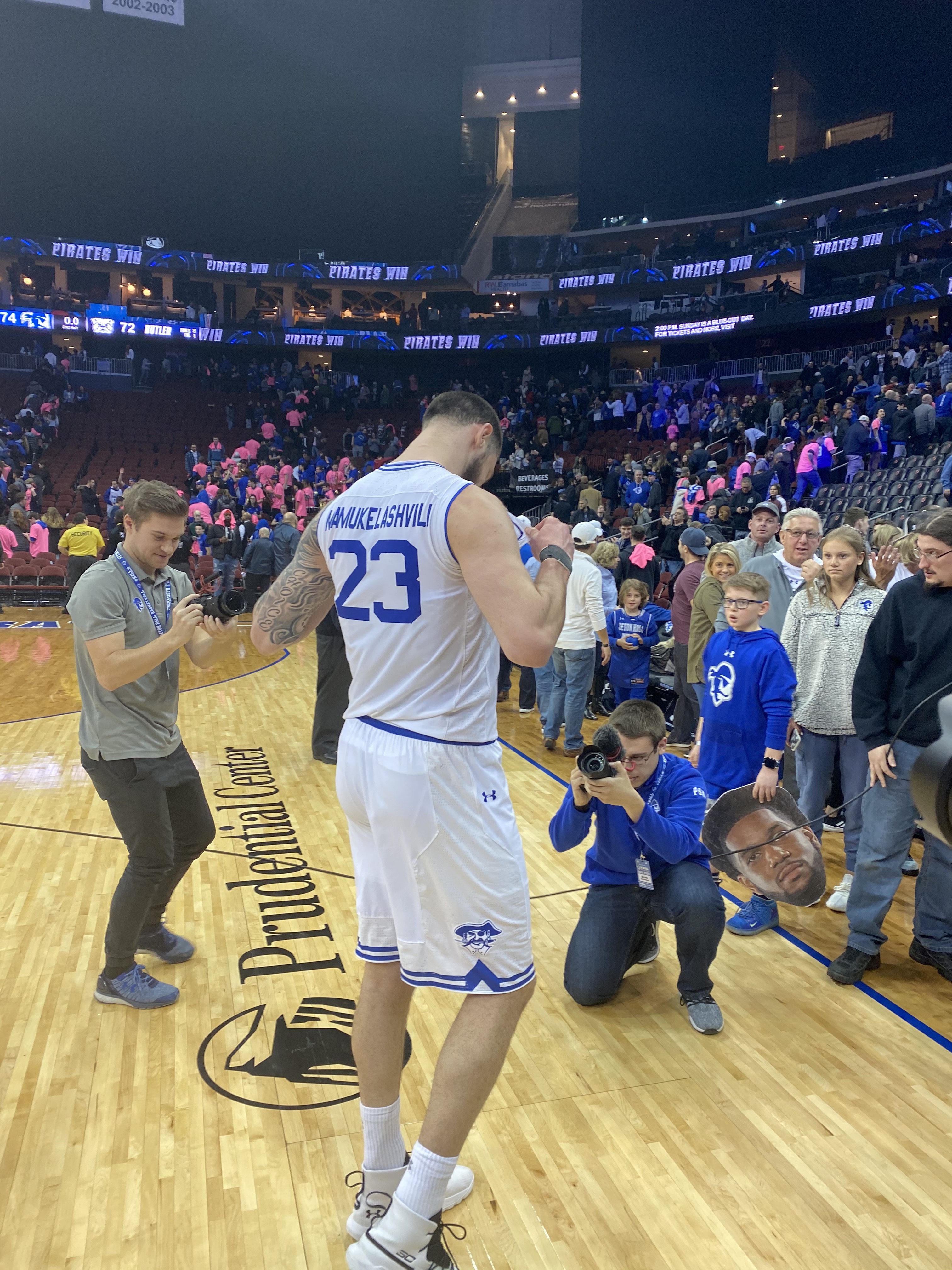 Seton Hall basketball got the news they needed as Sandro Mamukelashvili decided to stick around for his fourth and final year of eligibility.

In recent years, Seton Hall basketball has been a top program in the northeast. Head coach Kevin Willard has instilled a winning mindset and in the process has continued to return star junior players who tested the NBA waters and then some.

At 6-foot-11, 240 pounds, ‘Mamu’ is a stretch-four talent with the range of a two or a three. He can also use his body to finish consistently down low while having enough ball-handling skills to bring the ball up the court in pressure situations.

A native of Tbilisi, Georgia, little was known about him coming out of college, although he played at high-school powerhouse, Montverde Academy. According to 247sports composite, Mamukelashvili was a three-star recruit, although 247sports had him listed as a four-star.

He committed to the Pirates over the likes of Louisville, Boston College, and more – and that has worked out and then some in South Orange, New Jersey. Mamu’s decision to come back for his senior season not only gives Seton Hall a legitimate chance to finish at the top of the Big East but should also place him in the Wooden preseason watch list and perhaps a few other awards.

In three years in the Seton Hall basketball program, Mamukelashvili has improved drastically. A 2.6 points per game and 1.9 rebounds guy during his freshman year, Mamu averaged 11.9 points, 6.0 rebounds, and 1.4 assists last season. He came back even stronger after an early-season injury, and still put up those numbers alongside Jerry West award winner Myles Powell, and the most talented and deepest Pirates roster in years.

Mamukelashvili told me that Coach Willard didn’t push him coming back to school, and insisted for him to make the best decision for his career. Ultimately, Mamu chose the route of playing his fourth and final season, saying, “He (Willard) told me if I come back, I have to have a mindset of a leader, and the guy who will help his teammates get better.”

That decision wasn’t a walk in the park either. Mamukelashvili said 17 NBA teams had contacted him throughout his process of testing the NBA Draft waters. “It was a great experience,” he said, “You learn so much about yourself, and just having general managers and assistant general managers talking to you and telling you what they love about you, it’s surreal.”

NBA scouts didn’t shy away from saying what they liked about his game either. Mamukelashvili told me they really liked his size, dribbling ability, passing, and shooting, but encouraged him to work on everything to become an elite player. “They want me to show them that I can be the go-to guy and I can be the guy who can help his teammates be better,” said Mamukelashvili.

But it’s not just Sandro and Coach Willard that are excited about his return. Sandro said his Pirates teammates “reached out and congratulated me and just told me they can’t wait to go back on the court and just have the same chemistry and same mindset we had last year.”

Last season, the Pirates were one of the top teams in the country. They were ranked in the AP Top 25 all but four of the 20 weeks of the poll, with a high of eighth in the nation. Led by Myles Powell, Seton Hall took down four top-25 teams on the season, with a win over No. 7 Maryland coming without Powell and Mamukelashvili.

The Hall will be without Powell and starters Romaro Gill and Quincy McKnight. However, including Mamukelashvili, Seton Hall basketball will still return four of their top seven scorers from 2019-20, and almost 40 points per game from a year ago.

They also bring in Takal Molson, who sat out last year after transferring from Canisius where he averaged 16.9 points and 5.4 rebounds his sophomore season. Bryce Aiken, one of the top-rated grad transfers also chose the Pirates, after putting up career averages of 16.8 points, after a career-high of 22.2 points as a junior.

On top of this, Kevin Willard will bring in two freshman guards, both rated three-stars by 247sports composite. 6-foot-5 Dimingus Stevens has been projected to earn a decent amount of minutes, while Jahari Long is a talented guard who should get a chance on a team that lost three guards to graduation and the transfer portal.

If Mamukelashvili can be the leader he wants to be, the talent around him is there. And Powell, who came back last year and excelled, believes Mamu can be unstoppable. “He thinks I can accomplish a lot more by coming back,” said Mamukelashvili.

But perhaps showing his maturity, it isn’t just basketball that Mamukelashvili is focused on. Mamukelashvili said he really wants to get his degree and encouraged people to continue to wear masks and do the right thing to keep each other safe.

“I don’t want everybody to come back and think (COVID) is gone, because they’re not only endangering themselves, they’re endangering their families and us as student-athletes,” Mamukelashvili said.

A leader on and off the court, Seton Hall basketball got the early Christmas gift they wanted when Mamukelashvili announced his intent to come back and play his final season at ‘The Rock’.