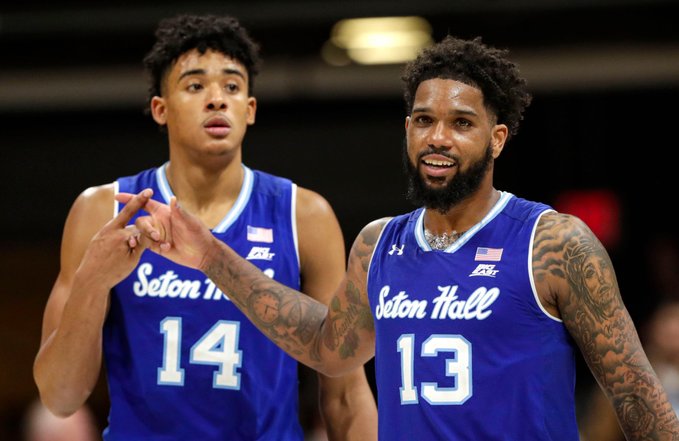 On Wednesday, the Seton Hall Pirates continued their hot play, using a late second half spark to finalize a comeback, and earn their second win over a Top 10 opponent this season.  Myles Powell’s 29 points led the Pirates, while Quincy McKnight added 11, along with 13 assists and seven rebounds.  Romaro Gill provided a big presence down low, scoring 17 and rejecting three shots, with most of those stats coming in the second half before he fouled out.

Butler was paced by Kamar Baldwin, who scored 19 and dished out six assists.  Jordan Tucker added a double-double of 14 points and 10 boards off the bench.

The Pirates came out of gates quick, eventually holding a 17 to 8 lead.  Butler battled back however, as Jordan Tucker got hot from deep, along with Bryce Golden making long range jumpers.  This helped the Bulldogs take a 40 to 30 lead in to halftime.

Seton Hall came out with a gameplan in half two however, and it was to feed Gill down low.  The big man erupted for 15 points in the first 11 minutes of the second half, helping the Pirates to claw back within two points.  However, Gill picked up two straight foul calls, and was forced to sit for the remainder of the game with about four minutes left to play.

That’s when the Pirates got hot.

The Player of the Year candidate, Myles Powell, hit a big three to put the Hall up four, followed by clutch team free throws in ensuing possessions.  Jared Rhoden then hit a game clinching three to put the Pirates up five with 42 seconds remaining, and later closed things out with a steal and a dunk to give Seton Hall the eight point win.

With the win, Seton Hall improves to 13-4 (5-0) on the season, and a date with St. John’s coming up on Saturday at Madison Square Garden.