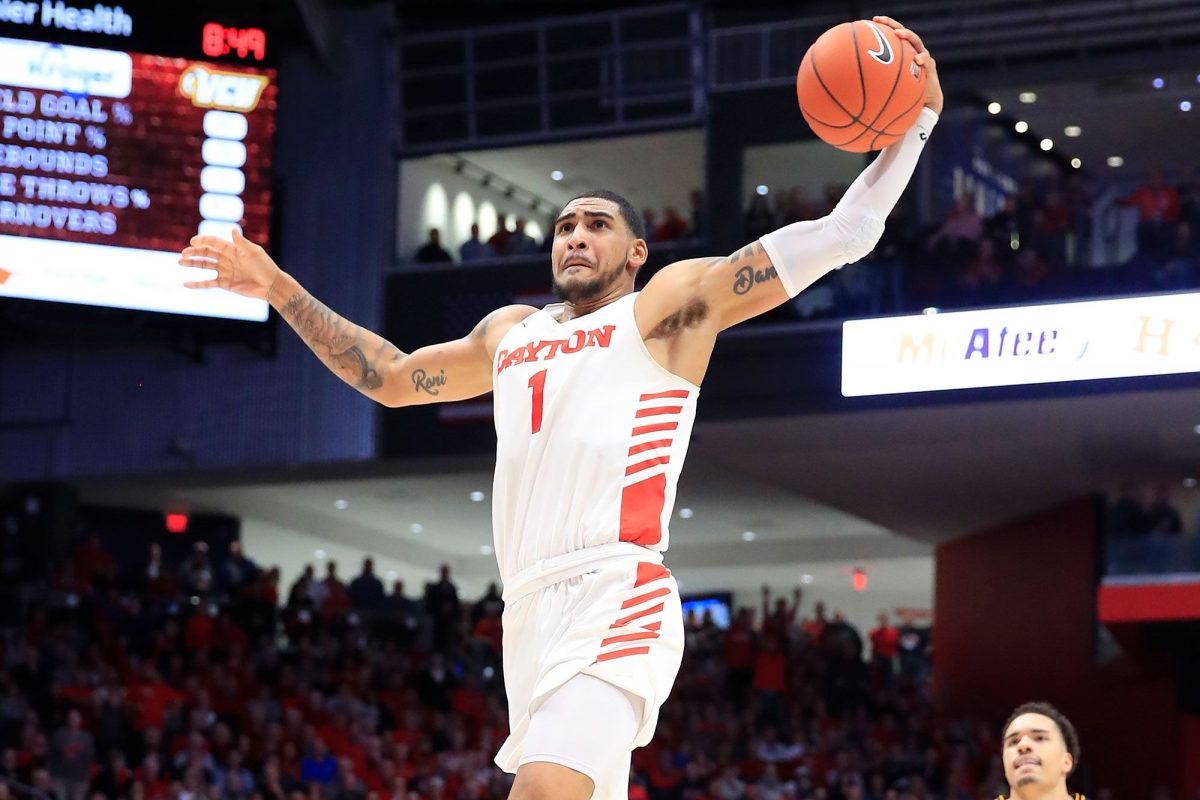 There are thousands of top college basketball players all over the country, how do you pick just 26?

This season was filled with talented players, and some letters were very close on deciding who gets that top spot. To decide who gets the top spot in a letter, there was a criterion. The first priority was being an All-American. If two players were All Americans for the same letter, which was the case, then it comes down to stats.

“Doke” was an easy selection. Azubuike was a second-team All American this season and a top defender in his country. He also was a big part in leading Kansas to the #1 team in the country and what could have been a title run for the Jayhawks. He beat out Precious Achiuwa (Memphis), Paul Atkinson (Yale), Ty-Shon Alexander (Creighton) and Asahan Asadullah (Lipscomb).

This one was extremely close between Bey and Jared Butler (Baylor). Butler did receive more All-American votes than Bey, but Bey was named the top small forward this season and has slightly better stats. Both of these young men had tremendous seasons nonetheless and led their teams to Top 10 finishes. Kamar Baldwin (Butler), Desmond Bane (TCU), AJ Brodeur (Penn), and Jibri Blount (NC Central) also had great seasons.

Carey certainly lived up to being a top 3 recruit last year, being a second team All-American and being named the top freshman in the country last season. Other players who showed out are Jalen Crutcher (Dayton), Anthony Cowan (Maryland), and Jarron Cumberland (Cincinnati).

Dotson was one of the top college basketball players and one of the top point guards in a stacked position. Dotson was the leader of the top team in the country and had the stats to back it up. Other options were Lamine Diane (CSUN), Kristian Doolittle (Oklahoma), Samir Daughtery (Auburn), Antoine Davis (Detroit-Mercy), and Nate Darling (Delaware)

There wasn’t much competition here as “E” isn’t a very common last name letter. Edwards put up nearly 20 points per game for his team and will be a top 3 draft pick this fall. He beat out CJ Ellenby (Washington State).

Flynn was one of the more surprising stars this season, leading his team to a near-perfect season and taking home a second-team All American awards while he was at it. Toppin and Flynn were probably the mid-major top college basketball players. He beat out Jordan Ford (St. Mary’s) and Hasahn French (St. Louis).

Garza was the runner up for player of the year, and some thought he should have won it. He proved time and time again he deserves to be recognized as one of the top college basketball players and the top center in the country. Garza is a no-brainer for this letter, though he did have some competition. Marcus Garrett (Kansas) was the defender of the year and would have won in half the letters, but got unlucky. Other options are AJ Green (UNI), Jacob Gilyard (Richmond), and Jordan Goodwin (St.Louis).

Howard was the top scorer in the country this season, and was a first team All-American. When he is hot, there is no one who can defend him and he earned his spot as one of the top college basketball players. He beat out Ashton Hagans (Kentucky), Caleb Homesley (Liberty), Javion Hamlet (UNT), Kevon Harris (SF Austin), and Elijah Hughes (Syracuse).

The letter “I” is much more uncommon than it seems, and Ingram takes the crown. Many may remember him for hitting the game winning three vs Miami when he was on Loyola-Chicago, but Ingram still had a solid season at UCF.

Being the point guard at a prestigious school like Duke is no easy task, but Jones mastered it, receiving All American votes and being named a defensive player of the year finalist. Other players are Jhivan Jackson (UTSA), Carlik Jones (Radford), Loren Jackson (Akron), and Mason Jones (Arkansas).

While many might not have heard of him, Knight made a name for himself this season. Knight averaged 20 points and 10 rebounds this season and took home conference player of the year, and earned himself a spot on the list of top college basketball players on a mid-major team. He beat out Corey Kispert (Gonzaga) and Braxton Key (Virginia).

This one was between Lewis and Anthony Lamb (Vermont). Lewis quietly had one of the top seasons for a point guard, averaging over 18 points and 5 assists while shooting 45% from the field. He beat out three conference players of the year in Lamb, Loudon Love (Wright State), and Javon Levi (Texas RGV).

There were a lot of great options and 5 players could have taken this spot, but Merrill barely holds on. Merrill is one of the top college basketball players that play for a mid-major and took this spot based on his scoring and team success. He barely beat out John Mooney (Notre Dame), Skylar Mays (LSU), Remy Martin (ASU), and Isaiah Miller (UNC Greensboro). Naji Marshall (Xavier) and Jermaine Morrow (Hampton) also had great seasons.

Nwora came into this season with high expectations and delivered, earning All-American votes and leading his team to a top 15 finish. He was one of the top college basketball players in the ACC. Other options included Zeke Nnaji (Arizona) and Sa’eed Nelson (American).

This was a battle of the bigs between Oturu and Onyeka Okongwu (USC). Okongwu will get drafted higher in the fall, but an All-American vote for Oturu gives him the top spot.

This one was by far the most difficult selection. Pritchard was the top point guard in the country while his competition, Myles Powell (Seton Hall) was the top shooting guard in the country. It came down to stats and team success and Pritchard slightly beat him out. Powell probably would have won 80% of the letters but got unlucky. Filip Petrusuv (Gonzaga) also received All-American votes but didn’t have a chance against two of the top college basketball players in Pritchard and Powell. This letter was especially stacked, with four other conference players of the year having ‘P’ last names.

Unlike the last letter, this one was extremely easy. Quickley was the conference player of the year in one of the best conferences and had a great all-around season.

Richards joins Quickley as the top guy for their letter after taking the next step and becoming a premier center in college basketball. He beats out other talented players like Fatts Russell (Rhode Island), Jordan Roland (New Hampshire), Grant Riller (College of Charleston), and Paul Reed (Depaul).

Smith was the best player on a Top 12 team in the country and earned some All-American votes for that reason. If it wasn’t for Garza, him or Cassius Winston would have battled it out as the top college basketball players in the Big 10. Smith won over a few Pac-12 players in Oscar da Silva (Stanford), Chris Smith (UCLA), and Isaiah Stewart (Washington), as well as Lamar Stevens (Penn State).

Obi Toppin was the best college basketball in the world. He was the complete player and took home every award possible, and possibly could have brought home a championship for Dayton fans. His main competition was Terry Taylor (Austin Peay), Breein Tyree (Ole Miss), Tres Tinkle (Oregon State), and Killian Tillie (Gonzaga).

Besides ‘A’, having a vowel to start your last name has proven to be relatively uncommon, and Usher was the best player for the ‘U’ category. Usher had an respectable season, scoring 8 points a game and grabbing 4 rebounds as well.

Vassell proved this season he can make any team better. Vassell is a swiss army knife who can score, rebound, pass, or defend when asked. He beat out two Vitals, Mark Vital (Baylor) and Christian Vital (UConn)

Winston came into the year as a preseason favorite for player of the year. While he didn’t win it, he remained one of the top college basketball players in the country, finishing the season as a second-team All-American. He won over Doug Wilson (South Dakota State) and McKinley Wright (Colorado).

While he may not be putting up the stats of a top player, he is certainly a fan favorite for his bench antics and engagement with fans. This letter was extremely rare, making pant the top option. If you want to see our interview with him, click here.

Yurtseven quietly had a really good season, nearly averaging a double-double, but it was lost behind drama at Georgetown. Yurtseven didn’t have much competition, making him the easy pick.

The Big East gets another player in Zegarowski, who was a big part in Creighton’s dominant season. He was one of the top college basketball players in the Big East and was a nightmare for opponents.