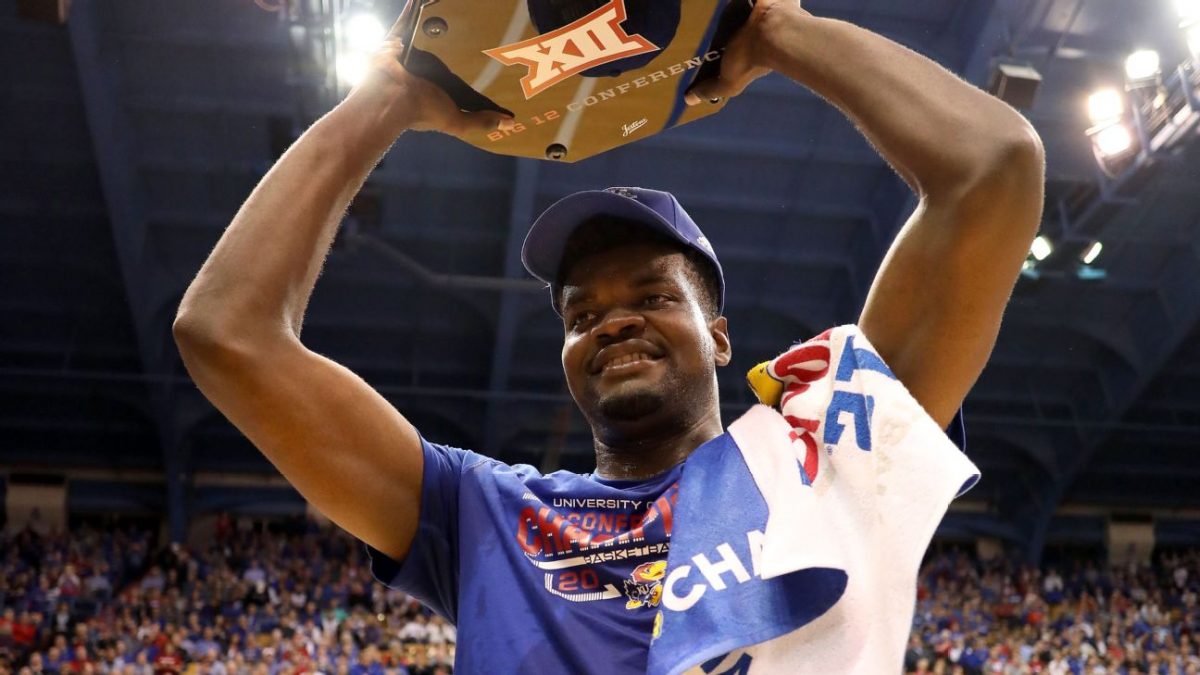 Kansas fans have loved hearing these words for the last 4 years. Udoka Azubuike, the 20 year old senior has had quite the career, with many downs, but even more ups. From the 280 pound, role player as a freshman to the 255 pound All-American today, the growth of Udoka Azubuike has been inspiring to watch and be a part of. As a rising junior at the University of Kansas, I have had the privilege of being able to watch “Doke” grow into the player he has become and continue to see what he will become.

In the class of 2016, Udoka Azubuike was listed as the 22nd best recruit in the country and the #4 center. Remember, he was only 15 at the time and was considered that good compared to the 18 year olds in his class. Despite offers from fellow blue bloods like Kentucky and North Carolina, he picked the University of Kansas in a memorable commitment video.

In his freshman season, Udoka Azubuike saw a decent amount of floor time, averaging 13 minutes a game while scoring 5 points and grabbing 4.4 rebounds during that time. Unfortunately, his season would only last 11 games after a wrist injury in practice would end his season. That Kansas Jayhawks team featured MIP contender Devonte Graham, #4 pick in the NBA Draft Josh Jackson, and current NBA player Svi Mykhailiuk. If Doke stayed healthy, this team could have easily made a deeper run in the tournament than its elite 8 finish and quite possibly could have won.

It was his sophomore season that we saw Udoka Azubuike start to become the force we all expected. Upping his total games played from 11 to 36, Azubuike’s numbers increased in every category, including a mind-blowing 77% field goal percentage. He was a key part of this team’s final 4 run and was becoming a big fan favorite for Jayhawk supporters.

The next season is one we all wish we could forget. I remember sitting in the third row of the nonband side after earning my seat from camping. I was excited to watch him, Devon Dotson and Dedric Lawson destroy a Wofford team that was getting a lot of hype because of the NCAA’s all-time 3 point leader Fletcher Mcgee. This game was painful however, as around the midway point of the first half, Doke would go up for a block and land awkwardly on his ankle. The crowd went silent, praying it was nothing more than a twist, but unfortunately, he did miss a few weeks because of it.

He was able to come back in less than a month to the joy of his fans, but after just two games trouble stuck again when another hand injury in practice cost him his junior season. After two season ending injuries, giving up seemed like the most comforting option. Many would take that route, but those two words are not in Udoka Azubuike’s vocabulary.

Senior season we saw a different beast. The former 280-pound machine focused on losing weight to become more athletic and stay healthier, having people shocked at the now 255-pound star. The weight loss certainly helped, and Udoka Azubuike became the college version of Shaq. On the offensive side, he became unstoppable if he touched the ball in the paint, dunking and using every post move possible to get the ball in the basket. He also finally starting using his size, averaging double-digit rebounds and even had 4 games of 15 or more rebounds.

On the defensive side, if anyone entered the paint they were either missing a shot or getting it blocked if Doke was there. He finished tied for 14th in all of college basketball in blocked shots, and was even named the NABC defensive player of the year.

The most memorable game for me and a lot of his fans is the game on the road against Baylor. After an 8 hour drive from Kansas to Baylor, I was tired but excited to see him and the #3 Jayhawks take on the #1 Baylor Bears. This was the biggest game of the season and the winner would not only take control of the Big 12 but would secure the top seed in the march madness tournament if it would have happened. In this game, Udoka Azubuike single-handedly beat the best team in the country.

Guarded by defensive player of the year Mark Vital and rebounding specialist Freddie Gillespie, Azubuike scored shot after shot, making 11 of his 13 attempts and pulled down a monster 19 rebounds. He played 36 minutes of the 40 total, an unheard feat for a big man. He also blocked 3 shots and didn’t commit a single turnover.

Sitting around a wave of green, I remember hearing Baylor fans simply remark, this man is unstoppable, and this is the best individual game I’ve seen in my life. Watching him that game made you feel proud to be a Jayhawk fan and it was really a full circle of his career as a Jayhawk.

We’re not done yet, … keep supporting us, keep encouraging us, and let’s go to Atlanta. Rock Chalk!

We will all miss the dunks, blocks, and finger wags. Doke, we hope you don’t forget to visit and we’re so excited to see what your future holds.