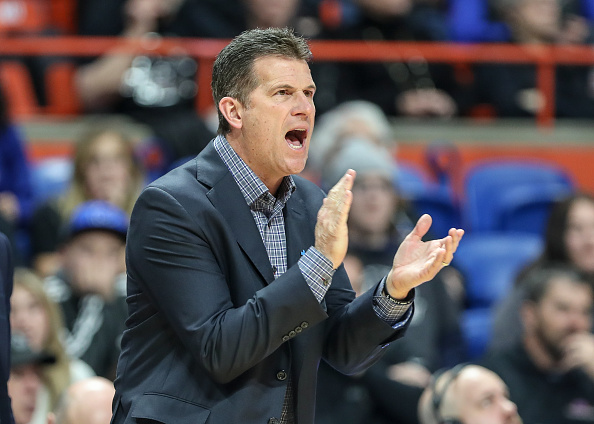 Last week we took a look at 15 first-year coaches at the mid-major level in the first part of our series. We continue on with the next 15 in part two.

Lennie Acuff arrived at Lipscomb from the Division II level after leading Alabama-Huntsville to a basketball powerhouse at that level. Acuff’s first year at the D1 level turned out pretty well considering the Bisons just came off their best season in school history. He took the program to its third-straight conference tournament championship appearance. This came after losing seven key contributors from the prior season. 16 wins are the most by a first-year coach in school history. With many players returning, year two for Acuff should be better. Lipscomb is reloading, not rebuilding after their recent success.

Jason Crafton arrived in Princess Anne, MD after coaching in the G-League. His first year as a Division I head coach was a rough one, especially on offense. The Hawks were sub-350 in points per game and offensive rating this past season. However, Crafton took the job knowing the challenge in front of him. UMES has only had one winning season since 2000 and 14 seasons of single-digit wins in the past two decades. Crafton helped turn his alma mater, Division II’s Nyack College, around, and the administration hopes he can do the same thing for the Hawks.

Greg Gary replaced Bob Hoffman in a move that many found surprising. However, Gary’s first season at Mercer showed change may have been needed. The 17 wins were tied for the most by a first-year coach in program history. The Bears’ fourth place finish surprised many in a loaded Southern Conference. He has many players from this past year returning for year two, meaning that Mercer could be a sleeper to contend in the league again. Keep an eye out for the Bears next season.

Lindsey Hunter spent his first year as a Division I head coach working on making Mississippi Valley State competitive in the SWAC. The Delta Devils were the last team to win a game this past season, waiting until conference play to do so. Defense is a major area of improvement that Hunter will need to work on, as his squad was ranked 352 in points against per game and 349 in defensive rating. This included starting the year giving up 110, 143, and 134 points respectively in their first three games. Hunter needs to find the same success that he had as an assistant and player in prior stints.

Danny Sprinkle took his first D1 head coaching gig at his alma mater. He led the Bobcats to their first winning season in ten years and their most wins since 2001-02. They also made just their third conference tournament quarterfinal appearance in the last 15 seasons. The biggest reason for their improvement was getting better on the defensive end, climbing 215 spots from the previous season. Sprinkle has plenty to build on for year two to push rival Montana for Big Sky supremacy.

Kevin Broadus took his second head coaching job after taking Binghamton to their first NCAA Tournament a little over a decade ago. Year one saw the Bears compete in the MEAC, showing that they are above the bottom tier in the league. Broadus is known for his recruiting, especially as an assistant at Georgetown. This could continue to pay off at Morgan State with four-star point guard Naseem Khaalid as the main piece of the incoming class. With Makur Maker’s decision to attend Howard, more high-profile recruits may found themselves committing to HBCUs.

Steve Alford came to Nevada after an unsuccessful stint at UCLA. He returned to the Mountain West after leading New Mexico before coaching at UCLA. Alford had big shoes to fill with Eric Musselman putting the Wolf Pack on the map before bolting for Arkansas. He did pretty well, leading Nevada to a second-place finish and keeping them competitive in the league. Alford should continue to implement a winning system in Reno, looking to emulate the success he had in the league in years past.

Greg Paulus is best-known for his playing days at Duke. However, his reputation as a rising coaching star landed him his first head job at Niagara in 2019-20. Paulus had the Purple Eagles competitive in league play, including victories over top-two finishers Siena and St. Peter’s. He also guided them to a win over Patriot League champion Colgate. Paulus has a majority of his team returning for year two, meaning he has a chance to develop the program even more in 2020-21.

Paul Sather is another fantastic Division II coach who was finally given a shot at the highest level. He has familiarity with the Dakotas after coming from Northern State, where he built a DII powerhouse. Sather helped the Fighting Hawks defeat their first Big Ten foe (Nebraska) since 1933. He also became just the third Summit League coach to take their team to the conference tournament title game in their first year. Sather will lose three starters in year two, so his ability to develop players will be tested.

Shane Burcar coached under the interim title, gaining the official title at the end of the 2019-20 season. He earned the job, coaching the Lumberjacks to their best season in five years. The six-win gain from 2018-19 was one of the five best turnarounds for first-year head coaches last season. What is more impressive is that most of Burcar’s coaching experience came from the high school level prior to arriving at NAU. Year two will allow him to coach with job security while having most of his core players back.

Darrin Horn had plenty of experience before taking over the Norse, guiding South Carolina and Western Kentucky to NCAA Tournament appearances. He wasted no time in doing the same thing at Northern Kentucky. He proceeded to guide the program to their second-straight conference tournament title. Horn was handed a program that has high expectations since transitioning from Division II, and he would have had the Norse dancing. However, year two will test him as there will be mostly inexperienced players taking the court for him.

Jeff Boals returned to his alma mater after finding success as the head man at Stony Brook. He saw his Bobcats finish in the middle of the pack in year one, though they were competitive. Boals does have a star in the making in Jason Preston. However, the overall youth of the roster will give Boals the chance to mold Ohio to his liking. It should also be noted that he has a trio of four-star recruits from the class of 2021 interested in the program.

Quinton Ferrell is another coach who took his first Division I head coaching job at his alma mater. Ferrell was also an assistant at Presbyterian when they transitioned from Division II. While he only won one non-D1 non-conference game, he did guide the Blue Hose to their longest winning streak (five games) in three years. Ferrell has a young team that he can continue to develop. Known for his recruiting, Ferrell also has 2021 three-star point guard Andrew McConnell interested in the program.

Billy Lange jumped across Philadelphia when he took over at St. Joe’s. He had been an assistant with the 76ers before taking this job. Year one was a tough one, though he did guide the Hawks to wins over Connecticut and William & Mary. Lack of defense and a young roster contributed to the struggles. Lange is known for winning at the mid-major level though, finding prior success at Navy. Incoming three-star small forward Jadrian Tracey will be a good starting point for Lange in year two.

Todd Golden arrived at San Francisco as a first-year head coach in Division I. He had been an assistant for the Dons prior, being integral for the renewal of success in the program. Year one saw USF win more than 20 games once more while defeating Yale, Cal, and BYU along the way. The Dons would certainly have made another postseason appearance. Golden has most of his team back and could have the program sniffing the NCAA Tournament in year two.

One thought on “Mid-Major Year One Coaching Evaluations: Part Two”