A New Look for the American: UCF basketball 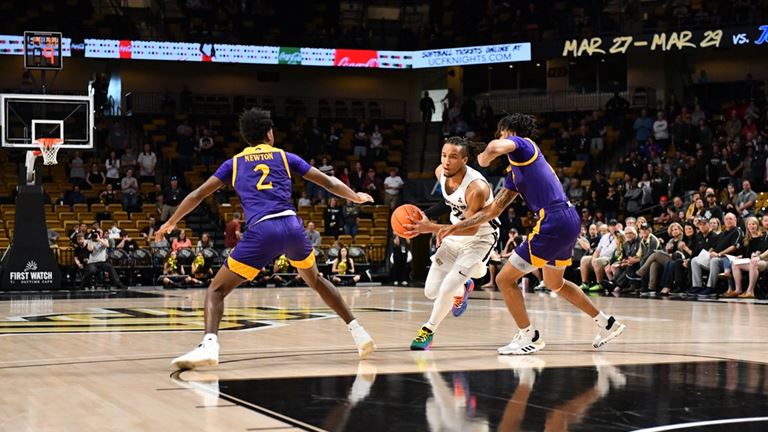 Looking at UCF men’s basketball program, the Knights ended the season on a big win over ECU and a solid win against SMU. In the ECU game, the ECU pirates seemed to struggle offensively, while UCF capitalized. The Knights shot 54.1% from the field and 51.7% from 3. The team caused 16 turnovers, 9 of which were steals, and found open shots with 24 assists. The Knights really seemed to find something that worked in the last two games. The UCF Knights had some big wins, outside of SMU, against Tulsa and Cincinnati. The team finished 16-14 overall and 7-11 in the conference. The UCF basketball team was a mature team with a majority of players being junior and senior players. The starting line up included only one freshmen player in Darin Green Jr. Knowing that, let’s see how the team will be changing this year.

This team gets lucky as it only loses one player to a professional career. That player is Ceasar DeJesus. Having received his degree, he will leave the UCF basketball team and likely start out overseas with the hope of playing in the NBA. The 6-foot-2 guard averaged 26.3 minutes, 9.5 points, 1.4 rebounds and 2.4 assists per game. He has the talent and will likely do well overseas. I would be curious to see if he can get on in the G-league, but with incoming freshmen looking at the G-league instead of going to college, I am doubtful.

Last year, there were two player that didn’t see time due to different circumstances. The first is Sean Mobley. He transferred from VCU and will be a junior in eligibility. He is a 6-foot-8 Forward that averaged 19.9 minutes, 4.2 points, 2.5 rebounds and 0.8 assists per game at VCU in the 2018-2019 season. I would not be surprised to see him beat out Doumbia as the starting forward. He is very talented, I like him on both ends. He has good foot work, great distributor, finds open shots and solid on defense.

The other redshirt was Moses Bol. He is a 7-foot-1 center from Colby Community College. His numbers were fine, but gets into foul trouble and has some issues with his ball handling and footwork. It will be interesting to see how he transitions to division 1 basketball and what work Coach Johnny Dawkins put into him. He will likely be eased in this year and get 5-10 minutes per game, unless he has not improved.

Two players join the UCF basketball team this year and while one is immediately eligible as a graduate transfer, it would be surprising if the other is able to get a waiver.  Darius Perry is transferring from Louisville where he averaged 19.5 minutes, 5.2 points, 1.5 rebounds and 2.5 assists per game. He is an excellent point guard. He sees the floor, finds open space and open men. On defense, he interrupts passing lanes and always has his eyes on the ball. He is 6-foot-2, has great tempo and ability to distribute the basketball. Definitely the type of player that I like, Perry is a team player and plays with confidence.

The other transfer for UCF basketball came on July 6, as he comes home from Oregon. CJ Walker is a 6-foot-8 forward. In his time at Oregon, Walker averaged 14.9 minutes, 4.0 points, 2.5 rebounds and 0.3 assists per game. His best game of his freshmen year came against Hawaii, where he scored 18 points, going 8 for 10 from the field and 2 of 3 from 3 point range. In that game, Walker also added 2 rebounds, 1 assists and 1 block. His strengths are on the offensive end. He has a long body, good spacial awareness, great for put backs, willingness to share the ball, knows where his teammates are and is aggressive around the rim. Walker weakness on offense seems to be in the mid range, while he seems to have the ability, if he can add a jump hook and mid range jumpers to his game, he could be an even better player. Again, not a lot of tape on his defense, but he is aware of his length and uses it well to get blocks and protect the rim from the easy shots. My worry is that looking at his limited minutes, he struggled defensively as he seemed to collect fouls. This may have contributed to his minutes being less than ideal. He should have a great chance to grow and develop either way under Coach Dawkins.

Both of the incoming freshmen are 3 star recruits, the first is Jamille Reynolds. He is 6-foot-9 player that can play forward or center. He is another player I like, he has talent, soft touch and knows the shot to take and when to pass. He is strong and always looking for the ball on both sides of the court. If Reynolds could add a 3 point shot to his game, he would be a huge menace for any team. He can find and create space, disrupts passing lanes, keeps players in front of him and times his jumps well. Reynolds could improve in his footwork on defense and go to the ball on passes. With all the players ahead of him, unless he really shows out I wouldn’t be surprised if he takes a redshirt season.

The other incoming freshmen is a 6-foot-6 player listed as a guard and forward, Isaiah Adams. While he has dual designation, I think he plays more like a forward. Adams is a good ball handler, but is not as good as a guard. He is agile and talented. Adams has a nice touch in his shot, can shoot the 3, and can create space to make a shot. He interrupts passing lanes, looks for the ball, is a rim protector and has good footwork. I am hoping Adams comes in with something to prove and is coach able. If he does, he could make a jump over Doumbia and get some serious minutes his first year. A wrench could make him the back up if Walker receives a waiver.

Coach Dawkins has collected a lot of talent and had little turnover on this UCF basketball team, this team could be a contender this year in the American Athletic Conference. With all of the incoming and returning players, this team is likely top 4 in the conference pending injuries and waiver. After a tough knock out of the tournament by Duke in the second round, the team hopes to rebound from last year’s season and aim for another NCAA tournament appearance.