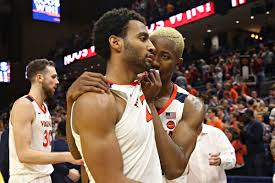 Mamadi Diakite entered Virginia’s basketball program in the 2014-15 season, taking a redshirt year and becoming a solid player in his four year career. After declaring for the draft in 2019, Diakite returned to school with the expectation as the go-to guy.

Braxton Key transferred to Virginia after the 2018 season and was a key to Virginia’s championship run, especially on defense. Although he missed time in his senior year due to a broken wrist, he returned wearing a cast and was able to produce at a high level on both ends of the floor.

After Virginia basketball won the 2019 National Championship, the Wahoo’s encountered some difficulties in their subsequent season. However, Virginia was able to turn it’s season around, winning it’s last eight games and snatching the two seed in the ACC Tournament. It looked as though the Cavaliers were bound to make another run in March, but the season was cut short, leaving all the speculation as just that.

Virginia’s biggest issue this past season was scoring, as there was no Kyle Guy, Ty Jerome, or DeAndre Hunter to look to when a basket was needed. As a result, players who were used to scoring in little quantities were forced to step up to take big shots. Kihei Clark, Jay Huff, and Tomas Woldentensae all became adequate scorers and defenders, but Key and Diakite shined in their senior seasons.

Key began the season strong, averaging over 12 points per game before he suffered a fractured left wrist. After surgery and a three game hiatus, Key returned to action, averaging 9.9 points per contest for the year along with a team high 7.4 rebounds per game, which included 1.7 offensive rebounds per game. Offensive rebounding was especially important for a Virginia team which shot just 41% from the field and 30% from beyond the arc, especially because it’s average margin of victory was just 4.6 points.

Key had a very good career in Charlottesville, but his finest moment came over 1,000 miles from Grounds in the National Championship game. With just 0.8 seconds on the clock, Key blocked a potential game winning three pointer from Texas Tech’s Jarrett Culver to send the game into overtime. The rest was history.

Diakite went from a role player to a star, putting up 13.8 points in his senior season along with 6.8 rebounds and 1.3 blocks. Diakite was always a defensive force in Charlottesville, but his offense drastically improved last season. In his junior year, the forward from Guinea averaged 7.4 points per game while shooting less than 30% from three. In his senior year, Diakite not only improved his interior ability, pulling moves out of his sleeve such as the sky hook or the step through in the paint, but also expanded his ability to a consistent shooter, improving his percentage from behind the bonus sphere by seven percentage points.

Diakite’s finest moment came in the 2019 elite eight game against Purdue with perhaps the most miraculous play in recent college basketball memory, when he tipped a Jerome missed free throw past half court, and subsequently caught a heave from Clark to make a two point shot to tie the game as time expired. Virginia went on to the Final Four, and the rest is history.

While Tony Bennett is bringing in a studded recruiting class in 2020, along with transfer Sam Hauser and returning talent that is expected to step up, Diakite and Key are irreplaceable, especially on the defensive end of the ball. Diakite finished his career with an 87.4 defensive rating and a 7.57 block percentage, while Key finished with a 91.5 defensive rating. To put these numbers in perspective, the lowest defensive ranking since 2010 by a power five player was Chris Singleton, who had a rating of 83.6 in his career at Florida State. Diakite and Key rank 23 and 241 in career defensive rating since 2010, respectively.

Key’s duties will be shared by Casey Morsell, Jabri Abdul-Rahim, Justin McKoy, and Kadin Shedrick. The versatility and vast repertoire that Key has will make him difficult to replace, so different players will each contribute an aspect of his game to the Wahoos next season. Diakite is followed by Marquette transfer Hauser, who has experience under his belt and will look to shine on offense in his one remaining year of eligibility. His defense is up in the air, but the offensive production should meet or exceed Diakite from 2020.

More importantly than basketball, Diakite and Key exhibited the Virginia basketball pillars off the floor, remaining committed to their community, maintaining a humble mindset, and giving a passion to their schoolwork as well as basketball every day. Diakite graduates with a degree in French, while Key graduates with a degree in history. The two will be sorely missed by the Virginia community.