Kansas Squeaks Past Dayton in Maui 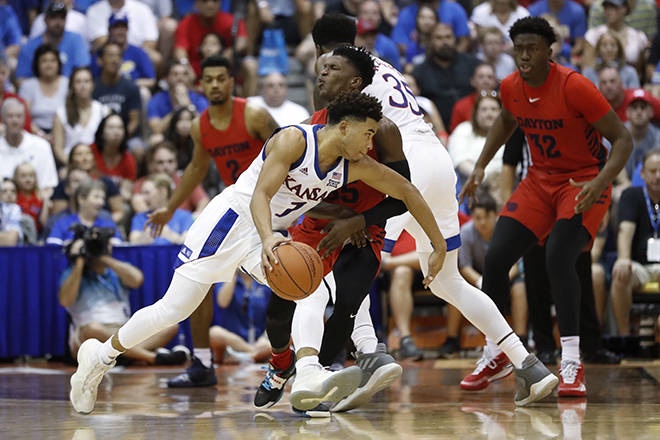 Kansas narrowly escaped Dayton in the Maui Invitational finals, winning in overtime by a score of 90-84. Devon Dotson posted 31 points for the Jayhawks, but it was Udoka Azubuike who led the charge in the extra period, scoring 9 of Kansas’ 17 points.

In an expected Kansas win, Dayton hung with the powerhouse for the entire game. The Jayhawks’ largest regulation lead was 5, which was with more than 10 minutes left in the first half.

Late in the second half, the flyers were ahead by 8 points, but Bill Self’s squad went on an 11-0 run to take a 3 point lead. Kansas would hold on to that lead with three seconds to tick, but Jalen Crutcher had other ideas than going home in just 40 minutes, as he nailed a three pointer to knot the game at 73.

In overtime, Azubuike took over, scoring the Jayhawks first 9 points and getting Kansas a 4 points lead. The Jayhawks never trailed in the overtime period.

Kansas proved it can hang with tough teams, and the Flyers, coming off a dominant win over Virginia Tech, proved they are a perennial powerhouse in the mid majors. Kansas improves to 6-1 on the year, and will travel back home to take on 21 ranked Colorado. Dayton falls to 5-1, and will travel back to Ohio to face winless Houston Baptist. Despite losing this one, do not be surprised to see the Flyers in the top 25 next week.