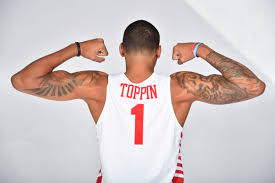 As we approach the 6 game mark of the college basketball season, many players have shown out. The early player of the year candidates like Cassius Winston, Myles Powell, and Jordan Nwora have proven themselves to be top players so far, but none of them compare to one player. Meet Obi Toppin, the 6’9 forward from Dayton, and the best player in college basketball.

Obi has been an absolute monster this season. Heading into the Kansas game, he averaged 24 points (6th best in the country), while shooting a mouth dropping 72% from the field and 53% from three. He is also averaging 8 rebounds and a block per game to add to his elite stat line. The usual critics came out, of course, claiming he’s been doing this against non-top 25 teams and wasn’t as good as advertised. He sure advertised it on Wednesday afternoon, dropping 18 points on 54% shooting while adding 9 rebounds and three blocks for his team. This was almost enough to beat the #4 team in the country, Kansas and complete an incredible weekend.

He has clearly been a difference-maker for his team as well. Last season, Dayton finished third in the conference with a modest 13-5 conference record and 21-12 overall record. This season, it looked like a repeat of this season after being picked to finish third in the A10 once again in a preseason poll. Now, thanks to Toppin, they sit at 5-1 and are widely considered a top 25 team in the country. Toppin is leading his team in points, rebounds, blocks, and field goal percentage, and has come through whenever the team needs him.

No player has played better than Obi Toppin this season, so don’t be surprised when you are hearing his name in the national player of the year conversation throughout the season.