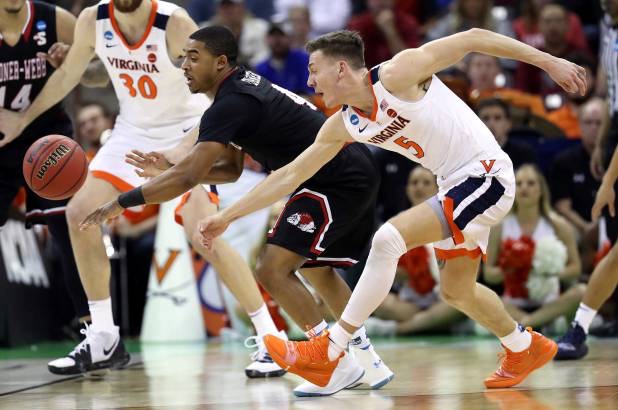 Virginia, after falling behind by 14 early in the first half, exorcised its demons, beating 16th seeded Gardner-Webb, 71-56. The Running Bulldogs got off to a hot start, and right when history looked to be repeating itself, Virginia took control to advance to the round of 32.

Gardner-Webb started the game hot while the Cavaliers were tight, and the Bulldogs took a quick lead that they would hold throughout the first half, getting to as large as 14. Virginia found its rhythm though, and the second overall seed closed the half on a 14-6 run to bridge the gap to 6 points, with Gardner Webb ahead 36-30.

The second half was all Virginia. The Hoos came out strong offensively and defensively, going on a 25-5 run in 10 minutes. After settling down, Virginia was able to get the lead up to as much as 21 before Gardner Webb converted late in the game to bring the final score to 71-56.

DeAndre Hunter led Virginia in scoring with 23, but Mamadi Diakite, Kihei Clark, and Braxton Key are the unsung heroes of this game, locking down on defense and creating shots for their teammates. Jose Perez had 19 points to lead Gardner-Webb.

After it looked as if Virginia would fall to a 16 seed for the second straight year, the Cavaliers can take a sigh of relief, and they now will face off with Oklahoma, a team which played very sharp in today’s earlier matchup with Ole Miss.