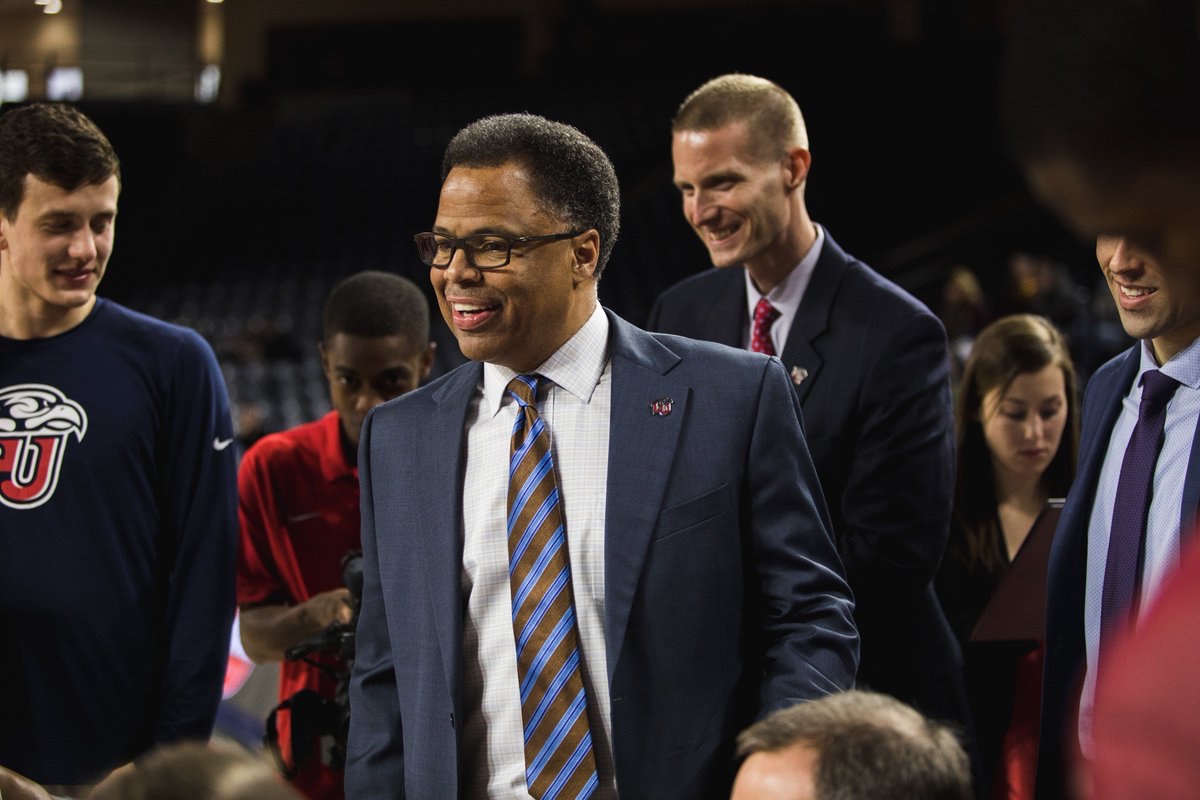 Ritchie McKay returned to Liberty as Head Coach in 2015 after a brief stint with one of college basketball’s powerhouse programs at Virginia. With help from the lessons he learned at Virginia, McKay — after a difficult first season — is leading the Flames to a 23-5 record, sitting atop the Atlantic Sun conference with a 12-1 record. McKay thinks his players, who embody his pillars, have the talent, drive, and poise to compete for the conference championship and make a possible run in the big dance.

After Coach McKay posted a 23-12 record in 2008-2009 as head coach at Liberty, he decided to move on and became the associate head coach at the University of Virginia. McKay liked the direction the program of Liberty was headed in, but a strong relationship with the Bennett family and a discussion with his wife led him to accept the job at UVA and “serve rather than be served.”

When returning to LU for his second tenure, McKay knew he wanted to compete for a conference championship and ticket to the big dance every year, and he was confident his time at Virginia would help him move closer to that goal.

“I feel like I got a Masters in the Pack Line defense,” McKay said. In his return to Liberty, McKay brought Virginia’s signature suffocating defense, which has led the Cavaliers to the top of the ACC year after year. Since then, Liberty has allowed an average of no more than 64 opponents points per game a year, 7 points less than the year after McKay left.

Not only did McKay pick up a certain style of play from Bennett, he also feels his time has helped him in other ways. “[Virginia] really helped my career and my personal life,” McKay stated. “The integrity in which Tony lives his life, it really inspired me.” Similar to Bennett, McKay based his recruiting and staff off of certain characteristics that he felt everyone in his program should embody.

McKay has done just that, as he has brought in players that do not necessarily fill the stat sheets, but play tough and empty their tanks in every game. McKay says his guys “inspire each other, inspire [himself], and inspire others.” Of these players, Liberty’s top scorer and one of McKay’s passionate players, Scottie James, especially embodies LU’s pillars.

“Scottie is worth the price of admission,” McKay said with authority when James was mentioned. “He empties his tank every night and plays with a vigor that is not often matched. James currently leads the team in points and rebounds, averaging just over 12 points per game and just under 9 boards a game. A particular game McKay brought up was one in which James only had two attempts from the field but brought down 17 rebounds. McKay says James is unselfish and has a team first mentality, which was showcased in this particular outing. Coach McKay remembers James constantly getting doubled in the post, and instead of taking low percentage shots, he looked for open shooters and cleaned up their misses.

James and McKay are currently leading Liberty to a solid 23-5 record, sitting at the top of the Atlantic Sun with a 12-1 conference record tied with Lipscomb. After falling to Lipscomb at home by 20 in late January, the Flames traveled to Nashville and defeated its newly formed rival by 8. In regard to the Lipscomb/Liberty rivalry, McKay says “the rivalry is being established because both teams and institutions have similar missions.” Although he would not look ahead to a possible rubber match in the conference championship, he mentioned that his guys would have to be sharp to beat the Bisons.

Before he starts focussing on the A-Sun tournament, Liberty has three remaining regular season games. They travel to North Florida, winners of three straight, Saturday night, followed by a home game versus Kennesaw State and a trip up north to NJIT. McKay hopes his team “pursues improvement,” going back to his pillar of “pursuit over perfection.” McKay also stated he makes sure his guys follow a Celtics Coach Brad Stevens saying, which is “do all the hard little things that lead to winning.”

If Liberty wins the A-Sun, Coach McKay will be headed to the NCAA Tournament for just the second time in his head coaching career. McKay believes his team is capable of making a run, saying “Our guys won’t be overwhelmed by the moment or the opponent.” He defends this point by bringing up LU’s non conference slate, where the Flames picked up a nice win over UCLA and played tough teams like Vanderbilt, Georgetown, and Alabama. He also recalled a scrimmage between Liberty and Virginia Tech early in the season for hurricane relief. The Flames only trailed Virginia Tech by 4 with less than 8 minutes to go, which first showed McKay that his team was poised for March Madness.

As for the long term plan for Liberty, McKay hopes to turn his program into a mid major powerhouse. “We hope to stride towards Casey Alexander at Lipscomb and Mike Young at Wofford.” McKay will continue to build his team around his pillars, and he hopes to compete for a conference championship every season. He hopes his team can be “great representatives of the university” and continue to play with passion and vigor every game.