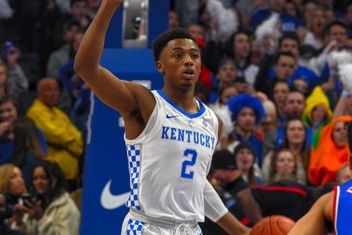 Kentucky took down first ranked Tennessee, 86-69, in Lexington following College Gameday. The Wildcats, led by PJ Washington’s 23 points, were able to hold Tennessee to a mere 28% from beyond the arc.

After falling behind 2-0, Kentucky never trailed to the top ranked team in college hoops. With 9:21 to play in the first, Keldon Johnson nailed a three pointer to give the Wildcats an eight point advantage. Tennessee cut it to as close as 4 before the half ended, but an Ashton Hagan’s layup gave Kentucky a comfortable 6 point lead at the break.

The Wildcats were able to hold on to this one, not letting Tennessee to get within 10 with under 15 to play.

Kentucky only made 5 three pointers, but shot over 50% from the floor in the game. The Wildcats were led by Washington, who posted 23 points, and Tyler Herro, who added 15 points and 13 boards. Tennessee’s big three accounted for all but 17 of the Volunteers 69 points, with Jordan Bone leading the way with 19.

Tennessee hosts Vanderbilt on Tuesday, looking to bounce back from the loss. Kentucky, looking like a top 3 team right now, will ride its momentum on Tuesday when it travels to struggling Missouri.