Auburn and Tennessee to face off for SEC Tournament crown 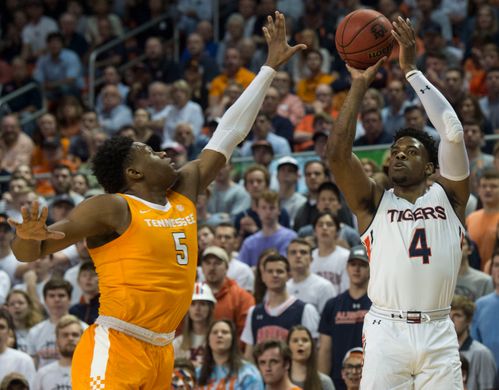 Here’s how we got here:

The Auburn Tigers defeated the Florida Gators 65-62 to advance to their first SEC tournament championship since 2000. Auburn may have gotten lucky with a no-call on a desperation three-pointer by Florida in the closing seconds, but they have the chance to be named SEC champions.

The Tennessee Volunteers beat the Kentucky Wildcats 82-78 to cap off an incredible comeback and advance to their second SEC championship game in a row. Tennessee closed the game on an 18-6 run, winning the season series against Kentucky.

Auburn and Tennessee have faced off once this year, and the Tigers upset the #5 Vols 84-80 at Auburn.

Auburn is on a 7 game winning streak dating back to the upset. Their last loss was against Kentucky almost 4 weeks ago. Jared Harper is averaging 17 PPG in the streak and carrying his team into the championship game.

Tennessee has defeated Kentucky twice in the past 5 games, thanks to the dynamic duo of Schofield and Williams. Riding off the momentum of an incredible comeback win, they hope to forget last year’s championship game loss and take home the title this season.