Virginia is Somehow Better This Year Than Last 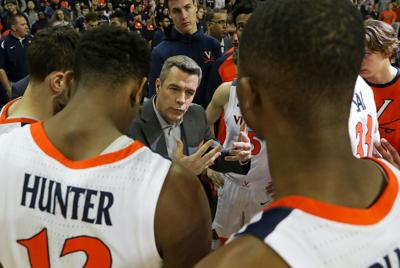 Last season, Virginia spent the majority of the season regarded as a top team in Division 1. After beginning the season unranked, UVA stormed onto the scene, losing only two regular season games and defeating big names such as Duke and North Carolina. However, things for the Hoos took a spiraling turn when they fell to UMBC in the first round of the tournament, the first ever 16-1 upset in the history of March Madness.

Going into the 2019 season, head coach Tony Bennett made it known that his squad would not dwell over the defeat, but rather learn from it and have a similar regular season campaign to last seasons and bring that success into the postseason.

Despite many casual fans views, Virginia had a very solid season in 2018 and should not be defined by the one loss to UMBC. It won both the ACC regular season and tournament, which is obviously very difficult given the strength of the conference. The issue for Virginia coming into this season was its lack of depth, as the Cavaliers lost two solid defenders and offensive facilitators in Devon Hall and Isaiah Wilkins, and they only brought in one freshman, unranked and undersized point guard Kihei Clark out of SoCal.

Virginia still has many big pieces from last years team. Kyle Guy, the team’s leading scorer last season, returned as an upperclassman after coming into in sophomore season with an even quicker release than before and a new ability to score effectively from inside the bonusphere. The Hoos also returned floor general Ty Jerome, who presents quick hands on defense and limitless range, and redshirt sophomore DeAndre Hunter, Virginia’s most highly regarded draft prospect since Ralph Sampson.

Even with Virginia’s returning talent, going into the season, it was unclear how the team could even come near the 2018 team’s success. Without two leaders, a small recruiting class, and the least amount of seniors on a Tony Bennett team in his career at UVA, how could the Cavs remain atop the college basketball world?

Going into the season, Virginia was unclear on whether or not Braxton Key would be eligible to play. A transfer from Alabama, Key submitted a waiver request to the NCAA to avoid sitting out this year for Virginia. That waiver was granted, and Key immediately showed impact, both offensively and defensively. In addition to Key, Kihei Clark saw significant minutes for the Hoos, even getting 4 starts in non-conference play. Clark and Key both learned the signature pack-line defense for Virginia fairly quickly, giving them more playing time and adding depth to the Virginia roster.

The biggest surprise to most Virginia fans has been the recent spike of minutes for redshirt sophomore Jay Huff. Huff, and 7’1” forward with the ability to shoot the triple, came to UVA with close to no strength and no knowledge of the defense. In his redshirt season, he managed to gain a lot of muscle mass, but still was unable to understand the defense, leaving him on the bench for the majority of the 2018 campaign. This season started off slow for Huff, sometimes not even appearing in non-conference games. But recent strong practices for Huff has allowed Tony Bennett to feel comfortable with playing Huff in ACC games, and it has shown dividends for Virginia, as Huff is yet another offensive threat to spread the floor.

With Jerome, Hunter, and Guy all returning in addition to these pieces, Virginia looked as though it would have another typical Virginia season: top defensive team, above average offense, and top 10 team in the NCAA. However, Tony Bennett worked hard in the offense to produce what looks like it can finally bring Virginia over the hump and see postseason success.

Unlike past Virginia teams, Tony Bennett incorporated more on ball screening to free up the ball handler to make plays. This allows Jerome or Guy get free to make an open three pointer or dish inside to Mamadi Diakite or Jack Salt for an easy layup. These on ball screens allow other shooters to become open via off ball screening, as the wings are less crowded and the shooter has room to run their rout and gain space for a three. This is especially beneficial for DeAndre Hunter, who has the ability to knock down a three or ball fake and head to the hole, where his layups are contested by less defenders than last year.

Bennett’s new offense has proved to be effective for Virginia so far this season. The Cavaliers rank 2nd in offensive efficiency according to KenPom, and next to its 3rd ranked defense, Virginia has a scary team.

Last season, Virginia’s three losses were mainly due to scoring droughts that are all too common to Tony Bennett’s team. This season, UVA has one loss to at the time first ranked Duke on the road by a mere 2 points. The reason the offense has not fallen into long droughts this season is the versatility the Hoos have on the offensive end. Virginia has seven players who have scored in double digits this season and three average over 10 ppg. The Hoos can shoot, attack the rim, and create shots for anyone on the floor, making their offense so much more effective than last years team.

With the improved offense, Virginia will avoid many of the droughts that cost them games last season, the most costly coming against UMBC. But the Hoos are improved and hungry, and with excellent coaching, multiple weapons, and improved offense, the Cavaliers are championship contenders once again, and may finally be the team that brings Tony Bennett to his first Final Four.