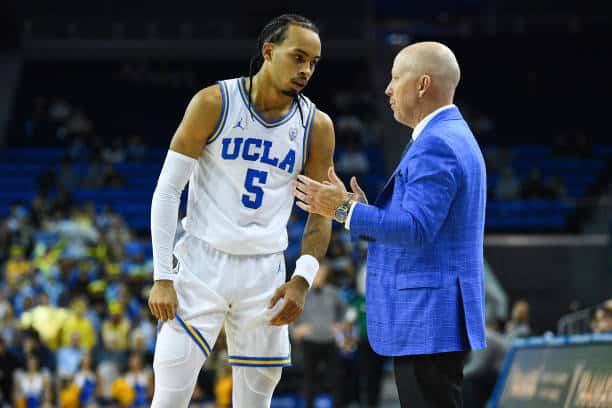 Joe Jackson gives his Pac-12 basketball power rankings for week 5 of the season.

Matchup of the week: Arizona vs. Indiana (Dec. 10)

All times listed are EST

UCLA opened up Pac-12 play with two wins. They beat Stanford on the road, and then they followed it up with a victory at home over Oregon. It was a 3 headed monster for the Bruins against Stanford, with Jaime Jaquez, Tyger Campbell, and Amari Bailey combining for 63 of UCLA’s 80 points.

Arizona had their first stumble of the year, losing at Utah to open up Pac-12 play. It was Arizona’s worst offensive performance of the year, highlighted by going 4/28 from 3. It was the first game all season that the Wildcats averaged under 1.09 points per possession, averaging only 0.86 PPP. They were able to take care of a not good California team highlighted by 25 points from Tubelis. Tubelis is without a doubt playing at an All Pac-12 team level.

If it wasn’t for an early season overtime loss to Texas Southern, Arizona State would be one of the last undefeated teams in the country. Since losing that third game, they have rattled off 6 straight wins, but only one has come against a top 50 Kenpom team (Michigan). They started off Pac-12 play with a gritty road win over Colorado, and then beat Stanford at home. Desmond Cambridge was the MVP of the week for Arizona State, leading Arizona State with 18 and 19 points respectively. A very big matchup awaits them against Creighton.

Coming into the week, Utah was 5-0 against teams ranked 100 or worse on Kenpom, and they were 0-2 against teams ranked 100 or better. That changed this week as they were able to upset Arizona to start Pac-12 play. They then followed that up with a victory at Washington State to start 2-0 in the Pac-12. The defense has been legit for this team, holding one of the best offenses in the country in Arizona to their worst offensive performance so far this year.

Oregon has had one of the tougher schedules in the country so far with 6 games coming against top 70 teams, including Houston, UCONN, and UCLA. They have not been able to beat any of those top teams, but they really only have one bad loss. Will Richardson has been really good for them this season. He led Oregon with 17 points and 8 assists in their Pac-12 opening win over Washington State. They really struggled from the perimeter against UCLA. Oregon needs to get back to full health ASAP.

USC had the easiest draw for the first two games of the Pac-12 season, having to play at California and then play Oregon State at home. They won both, although they were only able to win by one at home against Oregon State. This is a team that does not really have an identity, and if they don’t figure it out over the next couple weeks, they are going to have a long Pac-12 season.

Washington fell to Oregon State in their Pac-12 opener. They shot 22/49 from the field, including 4/14 from 3. In addition, they had 17 turnovers. Their defense has been solid, but they just did not quite have enough offense to win. Keion Brooks will have to be that guy for the Huskies. He scored 21 and 14 points against Oregon State and Colorado respectively.

Colorado being ranked 8th is more of a testament to the rest of the Pac-12 as compared to their performance. They beat Tennessee early in the season, but have been 2-4 since. They have been struggling on offense. They have a couple guys in Tristan da Silva and KJ Simpsons that could go off, but then the rest of the roster is looking to contribute more in that 2-6 point range. They couldn’t have asked for a worse start to Pac-12 play, losing both to Arizona State and Washington.

Washington State was another team that started 0-2 in Pac-12 play, losing to Oregon and Utah. They are a tougher team to fully judge because they have played only 3 top 190 Kenpom teams (and lost all 3), and then they are 3-1 against teams ranked 190 or worse. The UNLV matchup should be interesting. Mouhamed Gueye has been a real bright spot of the team, putting up 19 points against Oregon and a 20 point double double against Utah.

Stanford’s record against teams ranked 150 or worse in Kenpom: 3-0. Stanford’s record against teams ranked 55 or better in Kenpom: 0-6. They lost both Pac-12 games this week, one to UCLA and one at Arizona State. This is a team that’s best win is Florida State but their worst loss is a neutral court game against Mississippi. If good losses got you into the tourney, Stanford would have to be close to a one seed.

If not for two losses to Portland State, Oregon State may have climbed higher in the ranks. They are not going to compete for the Pac-12 title, but they seem to at least be competitive, a step in the right direction for this Beavers program. They were able to squeak out a one point win against Washington, but then lost by one to USC.

On the bright side, California is favored to beat Eastern Washington per Kenpom this weak. But also, California has been favored for a couple games, and they lost them all. California will have 4 chances over the next few weeks to try and get a non-conference win before starting in Pac-12 play. They will eventually get a win I believe because there is going to be one random game they can’t miss. However, chances are running out to get some realistic wins.