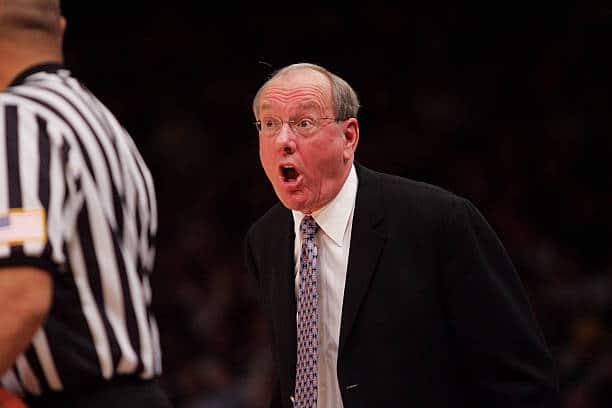 Syracuse and Georgetown will renew their rivalry on Saturday, playing for the 96th time.

Two founding members of the Big East, Syracuse and Georgetown developed one of the most heated rivalries in college basketball history. On Saturday, they’ll face off as non-conference foes for just the 8th time since Syracuse left for the ACC.

Throughout the rivalry, players and coaches helped to intensify the rivalry. From punches being thrown to microphones being grabbed, and words being exchanged, this northeast rivalry had it all.

And these figures made it what it is today.

Georgetown had Patrick Ewing and Syracuse had Pearl Washington.

He was Allen Iverson before it was cool and he gave Syracuse the player they needed to turn into a college basketball powerhouse.

Any time you’re considered one of the best players in school history during the most heated years of a rivalry, you’re going to be disliked.

And given the fact that Washington made a buzzer-beater to give the ‘Cuse a home win over Georgetown, it’s going to add to the rivalry.

The shot was made in 1985, and I think this video shows what made it such a memorable moment.

It was a signifying moment in the Syracuse – Georgetown rivalry.

In the 1984 Big East Tournament Championship Game, Hoyas player Michael Graham threw a punch at Syracuse’s Andre Hawkins. He didn’t end up getting ejected from the game, but it certainly escalated the rivalry, which was still in its early stages.

Now, I’ll be honest. I’ve re-watched this clip tens, if not hundreds of times, and I didn’t see much. Was there the swinging of arms? Yes. Was it a basketball play? No. But let’s not get carried away here. This wasn’t a full-out KO.

But it was the epitome of what this rivalry was. There was no holding back when these teams faced off.

And then Gerry McNamara came to Central New York.

The pride of Scranton, PA, McNamara was one of the most hated players in college basketball history. Period.

It’s what you expect from a scrawny white kid who launches threes, makes his presence felt, and defensively, you can’t do anything about it.

Georgetown must not have watched a lot of tape, because it felt like whenever G-Mac squared off with Georgetown, he brought his A-game.

In a game on Feb. 21, 2004, McNamara, a sophomore, sank a three-point buzzer-beater to give the Orange a road victory.

The next season, at the Carrier Dome, McNamara absolutely torched the Hoyas, hitting five threes in the game against Georgetown, while simultaneously breaking the program record for threes in a career. He would go on to hit 149 more threes in the next year and some change, not looking back.

Then, of course, there’s the time when Syracuse won four games in four days to win the 2006 Big East Tournament. McNamara played out of his mind all tournament, hitting back-to-back buzzer-beaters against Cincinnati and UConn. Then, in the semis against Georgetown, he drilled five threes in the second half alone and had the winning assist to Eric Devendorf with 1.5 seconds to go, giving Syracuse their first lead of the game.

Safe to say that Georgetown fans were probably happy when his collegiate eligibility ran out.

Other than John Thompson, Patrick Ewing is the essence of what Georgetown basketball is. Of course, coach Patrick Ewing might bring up a bit of a sore spot for Hoyas fans, Ewing the player was a different breed on the court.

Make no mistake about it, Ewing was the best player to ever grace the floor in the Big East. You can argue other players like Chris Mullin, Kemba Walker, or Derrick Coleman. And all of them have every right to be in the discussion.

But the discussion is already over because that’s how great Patrick Ewing was.

And the three-time All-American and National Champion was especially disliked in the 315. One account by the Syracuse Herald Journal said that Orange fans threw ACTUAL Oranges at the backboard when Ewing was attempting to shoot a free throw. Here’s an excerpt from that article:

The crowd waited all of three minutes and 30 seconds to thoroughly pollute the atmosphere. Oh. sure, there were the early rituals— the banana that someone rolled onto the court when Ewing walked out. The sign that read “Ewing Cant Spell ESPN”. The thunderous salutes of “Who’s He? … WhoCares?… Big Deal… So What… and Big (Bleep)” when the Hoyas, who certainly have earned some measure of dignity by now, were introduced. But when Georgetown’s Reggie Williams sank a free throw, Boeheim grimaced when certain English lit majors in the student section shouted, “(Bleep), (bleep) you (bleep bleep)”

Then Ewing drew a charge from Washington, which sent even more tale into the aisle. And then Rony Seikaly fouled Ewing. The Hoya senior, who came to Syracuse with a 6-2 record against the Orange, poised for the free throw. He released it.

Just as it neared the rim. someone — obviously not a Syracuse quarterback — flung a perfectly timed orange that hit the backboard at the same time.

John Thompson, righteously angry for a good reason this time, waved his Hoyas off the floor. The PA announcer reminded everyone that the game could well be suspended. The referees took their time about resuming play, hoping the tumult would fade. When it didn’t Thompson brought the Hoyas back to the bench again, and there was no doubt he meant business. One more incident, and Georgetown would be back into the snow and on the bus. And then we would find out just how riot-proof the foundations of the Carrier Dome were.

But Boeheim saved the day. He went right to the microphone.

“I just want to say,” he said coldly, “that any time the next orange is thrown on the court, we’re going to ask for an intentional technical foul. And if I hear that chant one more time after a free throw, that’s going to be a technical foul, too. On us.”

Here’s the video itself. Check it out around the 15:00 minute mark.

That’s all I need to tell you about the kindness shown between Syracuse and Patrick Ewing.

The coach who turned Georgetown into a national powerhouse was not very well received by Orange nation.

Heck, the rivalry literally started when Thompson grabbed a microphone after the Hoyas beat the Orangemen, and declared that “Manley Fieldhouse is officially closed.”

It was a true statement, given it was the final game played in Syracuse’s old arena, but it wasn’t a statement that sat well with college basketball fans in Upstate New York.

There was always respect between Thompson and Boeheim, who coached against each other in nearly half of the all-time meetings between the two programs. For what it’s worth, Thompson held a 25-21 record all-time against Boeheim, barely edging him out.

When you coach for as long as Jim Boeheim, who is now remarkably in his 47th year as head coach of Syracuse basketball, you’re going to build up a lot of hate.

When the rivalry first started, Boeheim was a young, fiery coach, not afraid to speak his mind. His geeky glasses probably made it all the easier for Hoyas fans to heckle him.

In the present day, Boeheim is known more for cracking remarks at reporters with a very dry way about himself.

Here’s another more recent example, with another classic Syracuse rivalry:

Make no mistake about it – there’s always been respect both ways between GTown and SU. But unless you’re a Syracuse fan, chances are you don’t like Jim Boeheim, and that’s especially true at Georgetown.