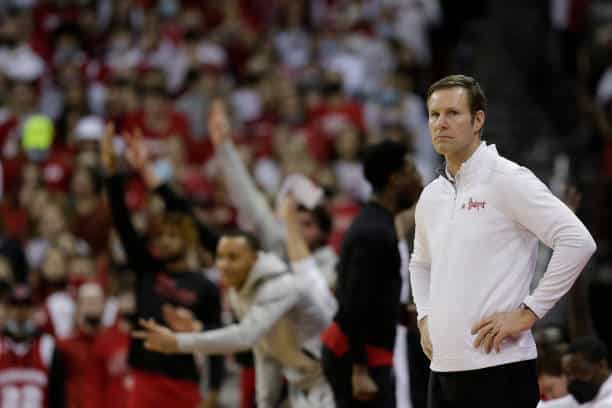 Some college basketball coaches came into the 2022-23 season with pressure to perform, and so far, these guys haven’t gotten the job done.

Now in his sixth year as head coach of the Bulls, Gregory is on track to have his fifth losing season. USF is an awful 2-6 with losses to Southeast Missouri State and Austin Peay.

Bulls fanatics will crown Gregory for a job well done in 2018-19. It was his second year on the job, and he turned them around from a 10-22 season to a 24-14 campaign, ending in a CBI Championship over DePaul.

Since that year, the South Florida Bulls have a record of 33-59 and counting. USF also missed out on the major conference realignment shift, staying put in the American Athletic Conference, as other teams out of the AAC will be joining the Big 12. We all know football rules that aspect, but basketball is second, so the pressure is on for Gregory to perform more now than ever.

You sort of have to feel a little bad for Hoiberg. He got his first major job at his alma mater, Iowa State, and was great. The Cyclones made four straight NCAA Tournaments under his tutelage, including two straight Big 12 Conference Tournament Championships in 2014 and 2015.

But then Hoiberg accepted a head coaching job in the NBA with the Chicago Bulls. Things couldn’t have gone worse and he was ousted in December 2018.

That brings us to his current job, at Nebraska, which in all fairness, is one of the toughest jobs in college basketball. In a difficult Big Ten conference, finding playing to commit to and stay at Nebraska is not easy, and Hoiberg is learning that the hard way. The Cornhuskers didn’t win more than 10 games in any of his first three seasons.

This year, Nebraska is 4-3 and has shown some improvements, with no bad losses, and for what it’s worth, a power conference win over Florida State. However, you can really own grade Hoiberg’s job on how the Cornhuskers perform in the Big Ten, where they have gone just 9-50 since he took over.

I really believe that Hoiberg is one of the most underrated college basketball coaches out there. But the situation he’s in right now doesn’t seem to be working much on either end of the spectrum.

Would Florida State ever consider letting Hamilton, 74, go after 21 seasons as head coach of the Seminoles?

Unfortunately, it’s starting to look more and more like his peak with the program was from 2016-2021. Last season, the Noles went just 17-14, missing out on the NCAA Tournament for the first time since the 2015-16 season. This year, Florida State is 1-7, heading into a matchup with #6 Purdue in West Lafayette, Indiana on Wednesday.

The diciest thing about the decision is Hamilton’s age and reputation. He’s turned the FSU program from an afterthought into a yearly ACC contender. He’s also been the man in charge for over two decades, and usually, that means he’s in until he decides he’s out. But Hamilton’s Seminoles have never reached the Final Four.

An in-season firing would make headlines at a program like Florida State, and I also believe that Hamilton would agree to mutually step away before it got to that point. But right now, the clock is ticking. Rapidly.

The only power six college basketball coach without a win this season, Mark Fox might be on the hottest seat of all. He got the job after having a fair amount of success at Georgia, but times have been tough in the Pac-12.

Cal went 14-18 in his first year, which all things considered, isn’t an awful start. After all, the Bears went 8-23 the year before, so a six-win improvement is just what the doctor ordered.

Amazingly, all of California’s losses have been by ten points or less, including games against Kansas State, TCU, and Clemson. But the Bears can’t seem to score the ball, averaging 58.4 points per game, which is 357th out of 363 teams.

Cal starts Pac-12 play this week against USC and Arizona, which looks like two more losses on paper. I don’t want to call for anyone’s job or predict when a firing might take place, but it’s looking like a December 7th game against Eastern Washington is looking like a must-win if Fox is to turn this season around.

Like Hamilton at Florida State, Ewing also has a very interesting situation. He’s the best player on a long list of history at Georgetown, and at this point, doesn’t look like he really wants to give it up.

Ewing has done a few great things for the Hoyas. Since taking over in 2018, he’s had six 4-star and 5-star players commit and play for Georgetown. That’s what this program expects, which is one huge positive. In 2021, he coached the Hoyas to a Big East Tournament Championship – the program’s first since 2007

But aside from getting some great talent to Georgetown and that one run during a week in March, Ewing’s tenure hasn’t gone well. He has an overall record of 72-87 and is just 26-61 in Big East regular season games.

Ewing was already on the hot seat heading into the season and is sporting a 4-3 record with losses to American, Loyola Marymount, and Northwestern. His next six games? Texas Tech, South Carolina, Siena, Syracuse, Xavier, and UConn. It’s going to be tough, but it seems like Georgetown will need a few of those if Ewing is to gain any good traction.

There’s a chance Tinkle will be on the hot seat all season long. That’s just what you get from going 3-28 the year after winning the Pac-12 Tournament and making it all the way to the Elite 8. The drop-off was just historically bad.

To Tinkle’s credit, other than last year, he’s done a fairly decent job. Oregon State isn’t an easy place to recruit to, but he put together five winning seasons in his first seven tries in Corvallis.

This season, TWO (2) losses to Portland State already has Beavers fans nervous about the rest of the season. Tinkle probably doesn’t need to go out and get a 20-win season, but it would be in his best interest to win as many games as possible to make people forget about the 3-28 campaign.