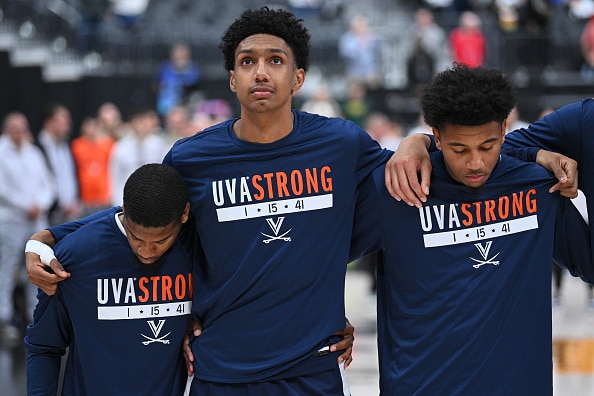 Matchup of the week: North Carolina State vs. Kansas

Sneaky good matchup of the week: Miami at UCF

What a weekend for the Virginia Cavaliers. Virginia was playing for a bit more than basketball, with the memories of classmates and Virginia football players Lavell Davis Jr., De’sean Perry, and Devin Chandler on their minds after the three were tragically murdered on Grounds earlier this week. But the ‘Hoos came to Vegas after their Monday night matchup against Northern Iowa was canceled with a tough tournament field to conquer, and they did just that.

Virginia shot the lights out on Friday to knock off fifth-ranked Baylor, and played sensational defense Sunday afternoon to beat Illinois and take the Main Event title home. Armaan Franklin is shooting 45% from beyond the arc, and Reece Beekman had a sensational game on both ends of the floor against Illinois. Virginia looks like a Final Four team early on.

UNC has been shaky early on, narrowly escaping Gardner-Webb but handling business against a solid JMU squad. Armando Bacot was kept in check against GW, but went off for 19 points and 23 boards against the Dukes to redeem himself. UNC needs him to play like the Player of the Year candidate he is if they want to maintain their top ranking in the country.

Jon Scheyer had a signature win opportunity but could not capitalize against Kansas. The Blue Devils led for most of the second half, but could not pull away and allowed Kansas to take control late in the game. Alas, Duke took care of business otherwise and still are very young with room to grow. A rematch of the two teams in March is not unforeseeable.

NC State is quietly having a very nice start to its season. Casey Morsell, a Virginia transfer, is coming into his own, finding his stroke from deep. The senior guard knocked down nine of his 13 three-point attempts this week. Being able to stretch the floor is critical for Morsell’s game, as well as the Wolfpack’s success.

Miami was exposed a little this week against Maryland, shooting extremely poorly despite forcing 18 Maryland turnovers. 5-20 from deep coupled with just 45% from the floor is a recipe for disaster, especially from an offensive-priority team.

I guess Notre Dame will just win a lot of close games this year. It seems Notre Dame has been unable to pull away from these mid-major opponents, but a win is a win, and the Fighting Irish has four of them. St. Bonaventure will be an interesting test for Mike Brey and co. this week.

The Hokies were two points away from having another three-win week and potentially cracking the top five of the ACC basketball power rankings. Penn State could not complete the comeback, and despite winning by just two, Virginia Tech never trailed in that contest. Charleston’s first lead since there were 18 minutes left in the contest came with just 1:25 to play, and they held on to give VT its first loss.

Jim Boeheim got his 1000th win (for the second time), but not before Colgate came into Syracuse and took down the Orange. Syracuse fell behind early, trailing by 14 at half, and could not come back. Syracuse did bounce back nicely, though, handling Northeastern with ease. Joe Girard, Judah Mintz, and Jesse Edwards combined for 58 points in the win.

Clemson bounced back after barely falling to in-state rivals South Carolina last week, winning its two matchups this week without worry. A tough bout with Iowa awaits the Tigers, but a win can get them out of the bottom of the league discussion for a while.

Georgia Tech has not had the most riveting schedule to start its 2022-23 campaign, yet they are still one of five unbeaten teams in the ACC. Not much else to judge the Yellow Jackets on quite yet, but a power-five matchup with Utah will tell us more about where GT stands.

Wake was riding high after defeating Georgia a week ago, and was just one win away from winning the Jamaica Classic. Unfortunately for Wake, LMU had other plans, defeating the Demon Deacons in overtime and taking the title themselves.

Boston College played in the nightcap this week in the Paradise Jam final, but fell substantially short against Tarleton. Losses to Maine and Tarleton are not great for the resume, but unless the Eagles put together a magical season, resume tarnishes are the least of their worries.

Pitt was outmatched by the better competition it faced this week, and the whole season for that matter. Michigan, West Virginia, and VCU all seem to show that Pitt is a bottom-of-the-barrel ACC team, though the Panthers did beat Alabama State as expected. Nonetheless, those in Oakland should not expect the Jeff Capel era to continue much longer.

It could be worse, Seminole fans: you could root for Louisville! Jokes aside, it has not been smooth sailing by any means for Florida State. Leonard Hamilton’s squad remains winless going into week 3, falling to Troy and in-state rival UF this week. Alas, there is light at the end of the tunnel, as Mercer and Sienna are winnable games this week.