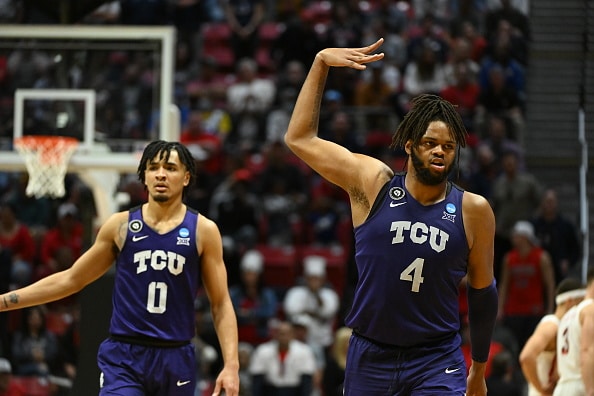 Big 12 Basketball Power Rankings one week into the season

Matchup of the week: Kansas vs Duke

Sneaky good matchup of the week: Baylor vs Virginia

Look, I mentioned this is based solely on the first week’s performance. This means preseason projections go out the window, and when we look at each Big 12 team, the West Virginia Mountaineers have played the best team in Pittsburgh. Not only did they go on the road and beat that school, but they destroyed them. Parlay that with an easy win earlier in the week and that’s how they end up in this spot for now. They have two easy matchups this week and are projected to extend their record to 4-0.

The Baylor Bears did exactly what they were supposed to do, beating these lower teams in a dominant fashion. Baylor haven’t shown any weak spots yet, but a big test against Virginia on Friday will allow us to see if they can be the championship contender many expect them to be.

Like Baylor, the Jayhawks took care of business at home last week. Gradey Dick has looked great in his first few games and not having Bill Self hasn’t proved to be an issue yet. Their first big test will come on Tuesday against Duke, who are expected to have their star freshman Derrick Lively in the lineup. After this week, Bill Self will be able to return to the bench, something Jayhawk fans are enthused about.

Texas proved their defense is going to be scary this year, holding both their opponents to under 60 points while scoring over 70 in both. The schedule picks up big time this week, taking on Gonzaga at home, who recently beat a borderline Top 25 team in Michigan State and easily handled Texas in last year’s matchup. Many people believe Texas has championship potential after this first week, and this will be a great test to see how legit they are.

Many people expected Kansas State to be a bottom feeder in the Big 12 this year, if these two games have proven anything, that will not be the case. They went on the road and beat a Power 6 opponent, and Keyontae Johnson has looked great in his first two games for Kansas State. They have an easy week upcoming, with just one matchup.

The Red Raiders have seen very balanced performances in the first two games, with all their key player performing at a high level. No individual has really shined, but no one has needed to. Texas Tech has a quiet week with a game against Louisiana Tech before a matchup against a top 10 Creighton team.

You could honestly move any of the 2-7 teams into whatever order you want. They all follow the same pattern of beating lower teams by large margins and hold undefeated records. Iowa State surprisingly doesn’t have a game until next Sunday, so Iowa State fans will have to wait to see the team in action again.

TCU sits at 2-0, but not the way they wanted to get there. They barely beat Arkansas Pine-Bluff, a much lower opponent at home. They were actually losing most of the game and needed a late push to get the win. They followed that up with a lackluster 11 point win against Lamar. Shooting is a huge issue for TCU, and that will be something they need to work on because when they get to that Big 12 calender, those 1 and 11 point wins become losses.

Oklahoma State had a busy week, playing three games and losing one. They are one of the two teams in the Big 12 to lose a game this week, and losing to Southern Illinois will really impact their resume down the road. They get a lighter week with only one game, but a difficult game nonetheless against UCF.

Oklahoma started their season with a buzzer beater loss to Sam Houston State at home. They followed up with an 8 point win against the same team that TCU only beat by 1, so at least they have that. This is not the start that the Oklahoma Sooners were looking for, but they’ll have a chance to right the ship next week with two mid major opponents.