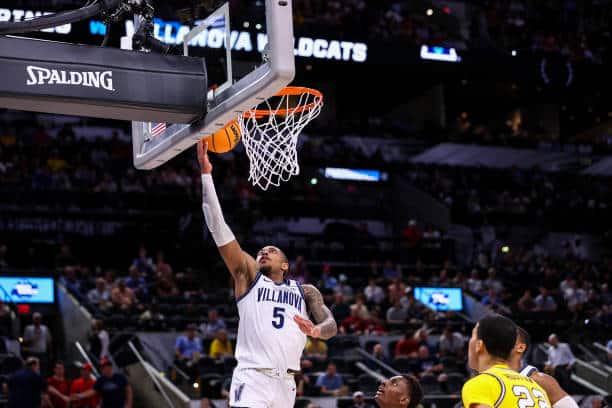 The Villanova Wildcats enter a new era as Kyle Neptune takes over as head coach.

CBB Review is once again ranking the top 100 teams heading into the 2022-23 season. Each day we will reveal the next team until we reach the team slotted at number one. Coming in ranked number 14 are the Villanova Wildcats.

Arguably the most surprising news of the 2022 college basketball offseason was Jay Wright stepping down from his head coaching position at Villanova. However, the Wildcats were prepared, hiring former assistant and Fordham head coach Kyle Neptune.

Neptune will have his work cut out for him as the Wildcats will begin the season with their top freshman Cam Whitmore and top returning player Justin Moore both sidelined with injuries to start the season. There is a chance Whitmore does return in time, but Moore’s injury is more extensive.

Either way, make no mistake, the Villanova Wildcats still have a very impressive and talented roster primed to compete for a sixth Big East Tournament championship since 2015.

With Justin Moore out for the start of the season, Whitmore is expected to be the primary scorer as a freshman. He’s also trying to heal up from a thumb injury, but it’s a lot less serious and he might be 100% by the first game of the season.

Injury statuses aside, Whitmore is an exceptional player who has the will to get to the basket and drop points. While shooting the ball isn’t his top strength, it shouldn’t matter. Whitmore is skilled enough to take over a Wildcats offense in need of points.

As the season progresses and the Villanova Wildcats are at *fingers crossed* full health, it’ll be interesting to see if Whitmore’s role changes. While he could very well be a one-and-done player, that hasn’t been the mantra of Villanova basketball. Either way, he’s in town for this season at the very least and should be one of the top freshmen, if not players, in the Big East.

It almost doesn’t seem fair to put that much pressure on a guy trying to come back from an Achilles Tear, but it’s just the simple fact that when healthy, Moore is the most talented player on the Villanova Wildcats.

Not only that, but Moore is a team leader whose been through it all. Although he’s never won a championship with Villanova – which is actually sort of hard to believe – he has been on numerous elite teams and has the experience to be a leader on a young Wildcats squad.

A lot of times, we like to look at how a certain program tends to keep a style of play from year to year and excel at that one specific part of the game. For the Villanova Wildcats, it’s all about whether or not they can keep it up.

I don’t know if I can think of another team in the past handful of seasons that not only lost a Hall of Fame head coach, but also one of the best point guards in program history. The tandem of Jay Wright and Collin Gillespie was a force that was unmatched.

The Wildcats also lost Jermaine Samuels, which adds an extra level to the change. And it’ll be a change worth nothing. Right now, Villanova’s only true point guard who is capable of starting is freshman Mark Armstrong. After that, it’s a team made up of off-guards and wings.

It’ll be a challenge that Villanova Wildcats fans aren’t used to, as the team loses a pair of exceptional players and starts the season with two notable injuries.

A lot will fall on the shoulders of Caleb Daniels, Brandon Slater, and Eric Dixon from the jump, especially if Whitmore isn’t able to adjust to the college game right away. Then, when Moore comes back, it’ll be interesting to see how coach Neptune changes the lineup. Moore is easily a starter, but Armstrong is the only legitimate point guard. Would Daniels come off the bench? Or would Moore run the point, even though he’s better off the ball? Those are some very important questions that don’t have answers right now.

What we do know, is that the Villanova Wildcats are the cream of the crop in the Big East. If any team or program is dealt a challenge and needs to fix it, I’ll put all my money and then some on Nova to figure it out. They have become the model program in college basketball, and despite many difficulties, will probably find a way to figure it out in the end.