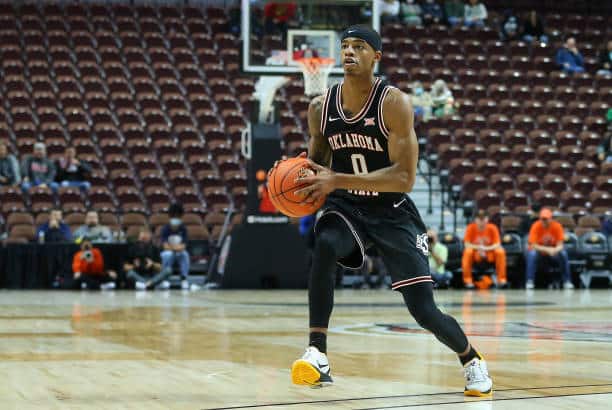 The Oklahoma State Cowboys look to improve after a so-so season and make a comeback into the postseason.

CBB Review is once again ranking the top 100 teams heading into the 2022-23 season. Each day we will reveal the next team until we reach the team slotted at number one. Coming in ranked number 34 are the Oklahoma State Cowboys.

After a subpar season where the Cowboys lost a handful of impactful transfers, including Isaac Likekele and Keylan Boone. However, Oklahoma State still boasts a trio of scoring guards who will look to bring them back to relevance in the Big 12.

It could also be a make-or-break season for Mike Boynton, who has only led the Cowboys to one winning record in the Big 12 since taking the job in 2017.

Avery Anderson controlled the Oklahoma State Cowboys last season and will look to continue his reign heading into his senior season.

Anderson has a very fluid offensive game, which includes a deadly three-point shot. The senior will easily be on the shortlist of the best point guards in the Big 12 this season.

He has had a bit of a turnover problem in the past, averaging more turnovers per game than assists last season. However, as a senior who can lead the charge and take over games for Oklahoma State, you have to pick your battles.

The already slim Anderson is listed at just 158 pounds by Oklahoma State, which is also something intriguing to keep an eye on.

Last season, Cisse showed his capabilities of defending at the Power Six level. The 7-1 center blocked nearly two shots a game, was an asset on the glass, and even helped out here and there offensively.

This season, the Cowboys have a lot less depth underneath, so Cisse’s development into turning into an even better inside presence is key. This Oklahoma State team is guard-heavy, but if Cisse can become a double-double machine, it opens up the book even more.

Staying with the trend, even though the Oklahoma State Cowboys have more experience at guard, they do have a couple of post players that can turn the game in their favor.

Other than Cisse playing a major role defensively, Kalib Boone was also a key shot blocker, altering over a shot per game last season.

Cisse (7-1), Boone (6-9), Tyreek Smith (6-9), and Woody Newton (6-9), are all very lengthy and slim players. While they may have a disadvantage against stronger, more physical opponents, they can make a difference by sending shots away.

It’s an interesting Oklahoma State Cowboys team. While most squads either identify with an influx of transfers, an experienced returning core, or a freshmen-heavy team, Oklahoma State doesn’t really fall into any of those categories.

Instead, the Cowboys will rely on Anderson’s playmaking, and Cisse’s post-defense, mixed with everyone else. John Michael-Wright comes in as a professional scorer from High Point, and could give a Cowboys team a boost in that department. Bryce Thompson is another name to keep an eye on, as someone who could benefit from other players leaving, to let his game shine through.

Off the bench, the Cowboys have a solid rotation of about nine guys. Chris Harris and Bernard Kouma are two wild-cards, but whatever the case, are veterans that coach Boynton should love to have in the locker room.

In a tough Big 12 conference, the Cowboys might fit that mold exactly – a wild-card team that could surprise a lot of people this season.