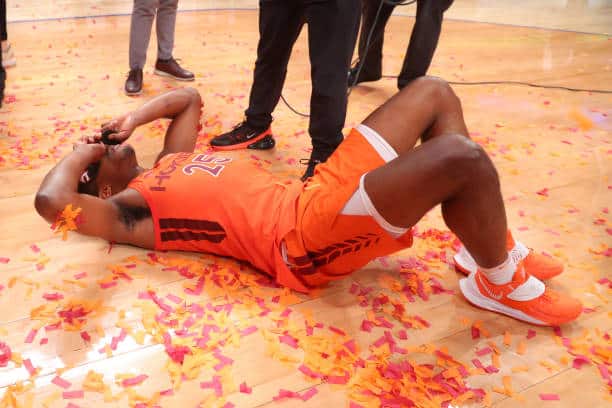 Coming off of a surprise ACC Tournament Championship run, the Virginia Tech Hokies look to build on their momentum for another successful season.

CBB Review is once again ranking the top 100 teams heading into the 2022-23 season. Each day we will reveal the next team until we reach the team slotted at number one. Coming in ranked number 36 are the Virginia Tech Hokies.

Virginia Tech had a formidable regular season, beating who they should beat and losing to who they should lose to. They had some momentum going into the ACC tourney, having won 9 of their last 11 to close out the regular season. Then they went on a tear in the tourney, shooting lights out in the championship against Duke. This propelled them into the NCAA tourney.

Now there are a little bit higher expectations for Virginia Tech, but they did lose 3 of their 5 starters in the off season. This team has a lot of new pieces with 6 or 7 players projected into the rotation whom did not play at Virginia Tech last year.

The athletic power forward does a little bit of everything for Virginia Tech. He can hang with the best of them down low, but also has good passing skills that allow teammates to cut off of him. Virginia Tech will look to use him in the post and cutting to the rim a lot. He also has the capability of putting the ball on the ground and getting to the rim.

On the other side, he is a monster defender and on the boards. If there is a loose ball, you are probably going to find Mutts nearby. He will be the best defender on Virginia Tech, and he will be tasked with a lot of opponents’ best forward. He is going to be a super important piece on both ends of the floor for Virginia Tech.

The deep-range sniper will have to do that once again. With a lot of the offense gone, even more of the burden will be put on Cattoor’s shoulders. Cattoor can catch fire in a moment’s notice, such as when he went 7-9 from 3 against Duke in the ACC championship game. When he is on, there is not much the defense can do.

He will get more defensive attention this year, and he will need to be able to handle it. Last year he was one of the top spot-up shooters in the country, and he shot really well when both contested and open. That bodes well for Virginia Tech as they will be looking for 14-16 points per game from Cattoor if possible.

Virginia Tech was one of the best shooting teams in the country. They had three players shoot over 40% from downtown. Only two players shot less than 35% from three on the team, and there were seven players that averaged at least two threes attempted per game. A few of the top shooters are gone, so it will be important for Virginia Tech to be able to replenish those threes.

A lot to love about this schedule. All we're missing is YOU!

The Virginia Tech Hokies. will have higher hopes this year, looking to be one of the top seeds in the ACC. They appear to have an “easier” ACC schedule relative to others. Of course, it will always be a challenge going through the ACC.

It is going to be tough to replace their three starters, but Mike Young has proven he can be successful. 4-star freshman Rodney Rice will be very important. Virginia Tech lacks point guard depth, and he has the potential to fill in that lead guard role.

Virginia Tech will be interesting to watch this year. They project to be a very good offense once again, and a defense that can do enough. This is a team that features a lot of new pieces, so it will be important for them to gel early. If they do, this team has some potential.