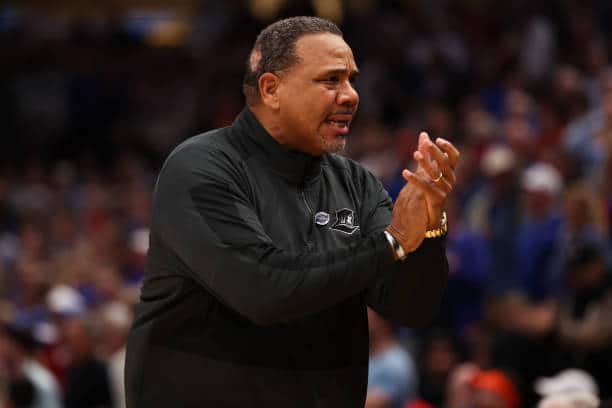 The Providence Friars hope a big haul in the transfer portal can help them repeat as Big East regular season champs.

CBB Review is once again ranking the top 100 teams heading into the 2022-23 season. Each day we will reveal the next team until we reach the team slotted at number one. Coming in ranked number 39 are the Providence Friars.

Last season, the Providence Friars were one of college basketball’s best stories. Coming into the season with few expectations, Providence rattled off an impressive 21-2 start to the season, and losing to Kansas in the Sweet 16 of the NCAA Tournament. It was the program’s best finish since 1997.

Providence would reach as high as 8th in the AP Poll and earned ranked wins over No. 15 Seton Hall, No. 20 Connecticut, No. 21 Xavier, and No. 22 Marquette.

This year’s Friars team has a different feel, as multiple starters and impact players used up their eligibility and either graduated or played professionally. That leaves Ed Cooley with a roster of more freshmen and transfers than returning players. However, there’s enough talent that if this team can gel, they can compete at a high level in the Big East once again.

The 5-10 point guard will be the face of Providence Friars basketball this season. Last year, he commanded a Friars offense that scored over 70 points per game, leading the team in assists. This season, it will be a much bigger challenge.

However, Bynum only started 10 games, as the Friars were blessed with a deep backcourt, usually led by senior guard Al Durham.

This year, Bynum has the tools and mindset to get the job done. He’s a tough player, who fits the mold that Ed Cooley wants on defense. Bynum is also an exceptional three-point shooter.

It will be interesting to see whether or not Bynum takes on a bigger scoring role, given the many losses in the scoring department Providence has.

A transfer out of La Salle, Clifton Moore will take over the starting center role, which is arguably the biggest hole to fill at Providence.

Nate Watson held down that position for a few years and was as good as any big man in the Big East over the past couple of seasons.

Providence fans will be happy to know that Moore blocked nearly three shots a game in the Atlantic 10 last season, so defensively, he should fit right in.

Offensively, it could be a bit of a challenge. Moore’s field goal percentage took a hit, because he can stretch out to the three-point line, but doesn’t do it overly efficiently. Depending on how Cooley decides to use him, we could either see Moore improve his shot from downtown, or play more inside. He did add a few pounds to his frame, which is also important in a physical Big East conference.

The major key to watch this season will be how quickly the Providence Friars can grow team chemistry. Only three key players return from last season, making up just over 20 points per game.

Bynum is the top returning scorer, but will also have to hold down the fort at point guard. Luckily, he’ll work beside another graduate senior Noah Locke, and talented sophomore Devin Carter.

On paper, they have the skillsets to work together as a fluid backcourt, but given they’re all coming from different places, it could take some time to get out all the kinks.

Ed Cooley seems to always get the job done when less is expected out of him, so I’m trending in that direction again. Because of the players not returning and a team based on the transfer portal, a lot of people are counting the Friars out. But counting Cooley out is never a good idea.

Other than team chemistry, Cooley’s biggest test this year is finding good play off the bench. Bryce Hopkins seems like the definitive sixth man, after spending one year as a role player at Kentucky. Alyn Breed also knows the Providence Friars system but struggled from the field mightily last year. He’ll after to improve on that.

After those two, it’ll likely be a trio of freshmen. Corey Floyd Jr. is the name to keep an eye on. He didn’t play at all at UConn last season but was a former top 100 recruit in the 247Sports Composite rankings. His father also played at Providence.

As always, the Big East requires toughness and a good backcourt. Although there are a lot of questions about this specific Providence Friars team, they seem to check off the box on both of those, which leads me to believe they have the potential to make some noise this year.