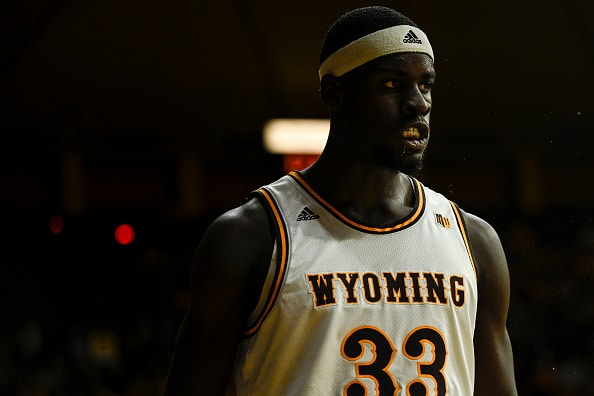 The Wyoming Cowboys are looking to make back-to-back NCAA Tournament appearances for the first time in 35 years.

CBB Review is once again ranking the top 100 teams heading into the 2022-23 season. Each day we will reveal the next team until we reach the team slotted at number one. Coming in ranked number 38 are the Wyoming Cowboys.

The Wyoming Cowboys made their first NCAA Tournament appearance in seven seasons last year. Last year’s team eclipsed at least 25 wins for the first time since that same 2015 Tournament squad as well. Wyoming had to sweat it out on Selection Sunday and then lost a heartbreaker in the First Four.

The optimism surrounding this year’s squad comes from the fact that most of last year’s key pieces are back. However, this time the Wyoming Cowboys want to solidify their standing within the tournament field, and possibly even capture a Mountain West title. The ceiling looks even higher for Jeff Linder’s group in 2022-23. Now they just have to live up to those expectations.

Graham Ike had a breakout campaign for the Wyoming Cowboys last season. The rising junior took advantage of his first season as a starter, averaging close to 20 points and 10 rebounds per game. That was good enough to be named to the Mountain West’s first-team by the media. Ike’s ability to command the ball down low makes him one of the best post players in the nation, and the notion that he can improve on his numbers this year would put him into the All-American conversation. Ike is one of the players you need to watch play at least once this season.

Strong guard play is how teams win games, especially at the mid-major level. Hunter Maldonado will command the backcourt as a starter, but Ethan Anderson provides key depth for Wyoming. Maldonado has the ability to play a large volume of minutes, but he is going to need to get breathers at times. If Anderson can fill those minutes in a valuable manner, that can go a long way to keeping Maldonado’s legs fresh during the season. The bonus part: Anderson started as a freshman at USC and has valuable experience playing in the Pac-12.

The Wyoming Cowboys were a good team last season. The chemistry the team developed throughout 2021-22 was a big key. However, it also had a lot to do with the high-level play of Ike and Maldonado. The bottom line is that the team relied on those two heavily to carry the scoring load. That can lead to isolated sets that let those two work. However, to potentially take the next step as a team, they will need some guys to step up around them. In order to do that, this team will need to share the ball more to get everyone involved.

The Wyoming Cowboys shocked a lot of folks last year with how well they played. This season, the Cowboys won’t be sneaking up on anyone. However, this certainly doesn’t seem like a team that’s afraid of a challenge. Wyoming will be gunning for the Mountain West title this season, and they have the tools to do so. If this group can find a consistent third scorer to help Ike and Maldonado, the sky’s the limit for this group.

Wyoming’s non-conference schedule offers a few opportunities for key wins. Match-ups against Drake and Boston College are possible in the Paradise Jam. The Cowboys also have big games against fellow mid-major at-large contenders in Dayton and Saint Mary’s on neutral courts in December. Otherwise, the Mountain West schedule looms for the rest of the season in what should be a fun race to the finish.