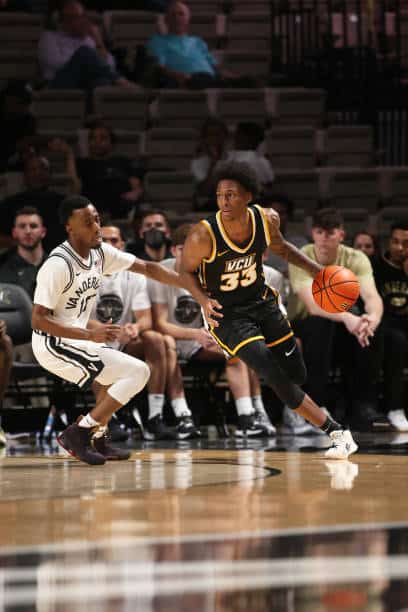 Mike Rhoades is hoping for a big turnaround for the VCU Rams. After finishing second in the A-10, the Rams are poised to challenge the conference’s top.

CBB Review is once again ranking the top 100 teams heading into the 2022-23 season. Each day we will reveal the next team until we reach the team slotted at number one. Coming in ranked number 53 are the VCU Rams.

With only two returning starters and a few bench players returning, this VCU Rams team is set up to look very different. Coach Mike Rhoades brought in three transfers, with two coming from Michigan.

This team is relatively young, with the upperclassmen being the players with the fewest playing time. The Rams won’t have much experience, but with the chance to get better with the incoming talent, there is an upside in the future. With the loss of Vince Williams as the team’s leading scorer, it looks like David Shriver will be the player to replace him, and Ace Baldwin will likely lead the team.

Now in his third year, Ace Baldwin continues to grow as a player. His ability to change speeds is something that throws defenses off of him. He also has an uncanny ability to stop on a dime and fit passes through small windows. While Ace is a risk taker, he can easily create highlight reels. Beyond that, he can pull up, drive into contact and make shots. Baldwin will likely be the leader of this team as he controls the floor, finds spots for himself and his teammates, and be the team’s pulse.

I believe that Baldwin will likely lead the team in scoring and assists. Rhoades believes in him as a player, and I expect him to be playing a lot, and for a good reason.

David Shriver is coming from Hartford and is expected to replace a new member of the Memphis Grizzlies in Vince Williams. His size and skill set are similar. However, Shriver will have to transition quickly into a more difficult conference. While I think he is competent, some players can not make the transition.

He is coming to help take pressure off Baldwin, pull rebounds, and help on the defensive end. With Shriver being such a young player, I expect Rhoades to turn him into a great VCU Rams player. There are high expectations, but also trust that he can grow and continue to learn.

Shriver has a nice offensive skill set, which includes a three-point shot. He can create space and can drive the basketball. As a forward, I expect he can drop some weight and show the glimpses seen. He could be a dominant force this year and next year in the Atlantic 10.

Analytic to Know: 341st in offensive turnover percentage in 2021-22

While this VCU Rams team is one of the best at turning over other groups, it also holds one of the worst turnover percentages, ranking 341st in offensive turnovers last season. Baldwin ran this team as the primary ball handler last season. I think this number should be lower with another year under his belt.

As stated earlier, this team is one of the best defensively in causing turnovers. However, it leads to another glaring issue in defensive free throw rate, which ranks 330th. If VCU can work on these small things, the Rams have a shot at finishing their season in the NCAA Tournament.

𝙉𝙤𝙣-𝘾𝙤𝙣𝙛𝙚𝙧𝙚𝙣𝙘𝙚 schedule is out 🐏◼️🔶

With a brand new team, there will be some growing pains. The VCU Rams have three games before it heads to the Legends Classic. They’ll play Arizona State and will face either Pittsburgh or Michigan in the next round. The Rams will also take on Memphis on November 20, Vanderbilt on November 30, and Temple on December 3.

There is still a free spot on December 11, and they finish the calendar year and non-conference against Navy. Of course, the Atlantic-10 schedule will also test the Rams.