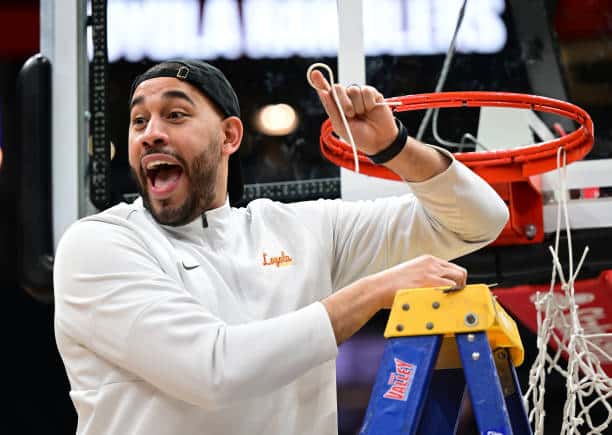 Drew Valentine looks to lead the Loyola Chicago Ramblers to another successful season in his second year and first in the Atlantic-10.

CBB Review is once again ranking the top 100 teams heading into the 2022-23 season. Each day we will reveal the next team until we reach the team slotted at number one. Coming in ranked number 52 are the Loyola Chicago Ramblers.

In his first season as coach of the team, Drew Valentine helped lead the Loyola Chicago Ramblers to a conference tournament championship and NCAA tournament appearance. With multiple of the top options gone, this team will have to have a rebrand of sorts. Some returners will combine with a lot of freshman and transfers in hopes of replicating last season and more.

The primary ball handler for Loyola Chicago last season, Norris will be tasked with even more of a scoring role this season with many of the key pieces gone. He was quite efficient last season, keeping the team on track when things went off the rails. He was one of the best shooters in D1 last year, shooting 43% from 3 which equates to 2.1/4.9 from 3 per game. Expect those attempts to go up more this year.

He was also a very good facilitator last season, especially out of the pick and roll. You could find him slicing into the defense before dishing out to the perimeter and roll man for easy buckets. He was looking to facilitate first out of pick and roll which gave his teammates advantageous defenses to attack. There are question marks on the perimeter however, so some of those passes may need to turn into shot attempts. In addition to his offensive duties, Norris will be playing the defensive brand of Loyola Chicago basketball, meaning that there will be no plays taken off on defense.

Wilson brings his talents to the Loyola Chicago Ramblers via Lehigh, where he was a great 4 year player. He is the perfect complementary piece to any team. He is a big body that is comfortable shooting or driving against bent defenses. Wilson should be one of the top targets for kickouts from Norris this season. Wilson shot very well last year from 3, and Loyola Chicago will need that once again.

Wilson has a unique combo of interior strength and size combined with the ability to play on the perimeter. He should be pretty versatile within lineups, playing anywhere from the 3-5 and guarding all of those positions. He feels like he will be a very important glue guy for a Loyola Chicago team that will need to be able to stick together early with plenty of new pieces.

Loyola Chicago once again ranked very highly in defensive efficiency last season. Per Kenpom, they were the 18th ranked defense, anchored by numerous length wings and some guards that could really get into ball handlers. One thing that is interesting when looking at the numbers is Loyola Chicago were not “exceptional” in any defensive category, but there were not categories that they were even just average in. They were just good to very good across the board.

The Loyola Chicago Ramblers come into the season looking to once again make the NCAA Tournament. They come into a very competitive A-10 conference that will no doubt provide its challenges. Coach Valentine would want it no other way as it may prepare them even more for March.

I think this team’s success comes down to whether they can replicate their defensive efficiency once again. If they can, it provides them a security blanket of sorts if the offense takes some time to gel. This should be another physical team that looks to disrupt offensive flow. This team has potential to be dangerous late in the season.

Ceiling: NCAA Round of 32 Exit