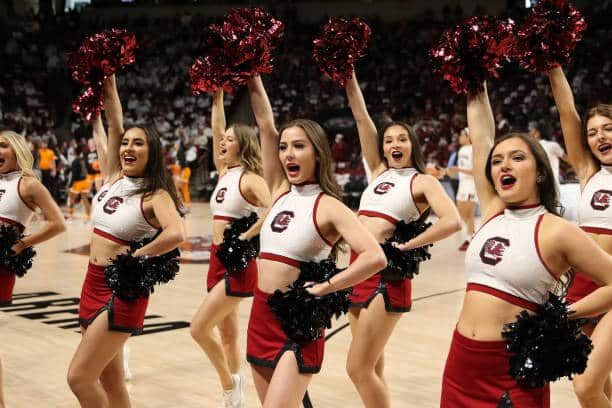 Despite a 12-win improvement from the 2020-21 season, the South Carolina Gamecocks decided to move on from coach Frank Martin, signaling a new era after the hire of Lamont Paris.

CBB Review is once again ranking the top 100 teams heading into the 2022-23 season. Each day we will reveal the next team until we reach the team slotted at number one. Coming in ranked number 55 are the South Carolina Gamecocks.

At points during last season, the South Carolina Gamecocks were a very good basketball team. However, there were also points where they were almost unwatchable.

As long as Frank Martin had coached the Gamecocks, the effort on defense was always just enough to make up for shortcomings on the offensive end. However, last year, South Carolina struggled on both ends, giving up 70 points per game while only scoring just over 71 a contest. While their record suggested improvement last year over recent seasons, their underlying analytics show that this was one of the worst teams in recent Carolina history.

On KenPom’s rating system, the Gamecocks ranked 16th in the country in terms of luck, out of 358 teams. Other than rebounding, there was very little the South Carolina Gamecocks did well last season, and even the rebounds didn’t lead to points on the offensive end. They ended the year with a shooting percentage of 41.9% and a three-point percentage of just 31.3%. Even for a fanbase that has plenty of patience for their basketball program, just one NCAA Tournament appearance in ten years simply wasn’t enough for Frank Martin, and South Carolina made the change to Chattanooga head coach and former Wisconsin assistant Lamont Paris after the Mocs’ March Madness run.

Despite the poor performance, there was considerable talent on the roster that ended up transferring out of the program after the firing of Martin. Point guards Jermaine Cousinard and Devin Carter left for Oregon and Providence, respectively. One of the team’s only reliable outside threats, Erik Stevenson, left for Bob Huggins and West Virginia. The SEC’s best dunker in Keyshawn Bryant left for South Florida, guard James Reese ran out of eligibility, and big men Wildens Leveque and Ta’Quan Woodley followed Martin to UMass, where he ended up after the split from Carolina.

In all, the Gamecocks’ top six leading scorers from last year are no longer on the team, which isn’t a good sign for a program that wasn’t stellar to begin with. However, Paris still has some members of the team from last year left, and brought in considerable talent, headlined by the reclassification of local five-star and the highest rated recruit in South Carolina history, GG Jackson.

Coming in from the transfer portal is The Citadel transfer Hayden Brown, who lit up the SoCon statistically for years but is yet untested against SEC competition. Meechie Johnson is a formerly high-rated recruit who had been slowed by injuries at Ohio State. Benjamin Bosmans-Verdonk was the backup to Kofi Cockburn at Illinois, and Ebrima Dibba, a guard transfer from Coastal Carolina who is unfortunately already lost for the season by means of a torn Achilles tendon.

Headlining the returnees is sophomore guard Jacobi Wright, who only averaged 3.4 points per game as a freshman but is still second in returning PPG behind Chico Carter. Wright is a natural passer who, at times, looked like the best player on the court for South Carolina last year. Carter only received about 10 minutes per game last season, but still managed to score over four PPG, the most by a returning player for the team. Freshmen Zachary Davis and Daniel Hankins-Sanford also could get rotational minutes as Paris figures out his preferred lineups.

Jackson is a program-changing recruit. Not only is he the highest-ranking recruit in South Carolina Gamecocks history and a hometown product, he’s instantly the best player on his team as a freshman.

A complete player, Jackson has a very strong basketball IQ, and can facilitate as well as score. Defensively, he’s big enough to play strong inside but also match up well with SEC-caliber guards.

If there’s anything to nitpick about his game, it’s the lack of a reliable three-point shot, which scouts will want him to develop before the end of the season.

Jackson will be asked to be the cornerstone of his program as a 17-year-old. That’s a tall task for any player, regardless of ability. The South Carolina team is young around him too, with only two seniors on scholarship. But, if any player has a chance at succeeding in that role, it’s Jackson. He’ll likely be a one-and-done prospect, but will show out for Lamont Paris and help build a foundation for years to come in the program.

Johnson, a former four-star recruit, never really caught on at Ohio State. He started five games last season after only averaging 5.8 MPG as a freshman, but suffered from dips in efficiency. He had his best games against Bowling Green and Xavier during the early parts of last season, but cooled off as it went along. That can be blamed on the depth of Ohio State, however, as the Buckeyes have had very talented backcourts in recent years.

Perhaps a change of scenery will help Johnson, as he has flashed loads of potential both in high school and in spurts for Ohio State. However, the Gamecocks are depending on him to step up. With Jacobi Wright expected to handle lead point guard duties, the two-spot is wide open for Johnson to take. Especially with Ebrima Dibba out for the year, the backcourt’s depth is challenged already. Johnson needs to step up, and all signs point to that happening.

Analytics to Know: 346th in turnovers per game

While the South Carolina Gamecocks had a talented back court, the Cocks played sloppily with the ball in their hands during any type of pressure by the defense. So much, even, that only 12 D1 teams committed more turnovers per game, none of them Power 6 schools. Jermaine Cousinard led the way with three per game, followed by Devin Carter with 2.1 and Erik Stevenson at 1.9. The team ended up with over 15 per game.

One of the first areas that Paris needs to rehaul is the offense. Statistically, the offense was the worst shooting offense in the conference at just under 42%. If the turnover rate goes down, and the backcourt can mature into a dependable unit, the shooting numbers should fall into place. But, if the team can’t figure out their turnover numbers, (which was partially due to the high tempo offense Martin tried to introduce), the offense will likely struggle again.

It’s hard for a team to be better the next season after losing its top 6 leading scorers. But, with the addition of 5-star freshman GG Jackson, the South Carolina Gamecocks could be a rare exception. Losing Devin Carter certainly hurts the ‘Cocks’ depth in the backcourt, but a breakout year from Jacobi Wright and the emergence of Meechie Johnson will help ease the sting.

The loss of Wildens Leveque, who led the team in FG% last season, also hurts, but getting GG Jackson from the grasp of UNC will likely improve the frontcourt compared to last season.

It is impossible to overstate how valuable Jackson is to this South Carolina Gamecocks program. Without him, this team could contend for last in the conference. But with the addition of Jackson, South Carolina has a legitimate chance of playing basketball after the SEC tournament. While the frontcourt still needs leaps in production from Josh Gray and Ja’Von Benson, it will improve markedly from last year.

Hayden Brown should slide in at the 3-spot, not just because of his amazing efficiency, but also because the team lacks any other option at the small forward position. The ‘Cocks need Brown to stay healthy, because without him there are serious holes to fill.

Don’t sleep on the “other” freshmen, either. Zachary Davis and Daniel Hankins-Sanford should both threaten for plenty of playing time early, especially Davis, given his length. (6-8) In all, this team could be special for first-year coach Lamont Paris. However, the depth is simply not there, and the South Carolina Gamecocks need to stay healthy to earn an NCAA Tournament bid.