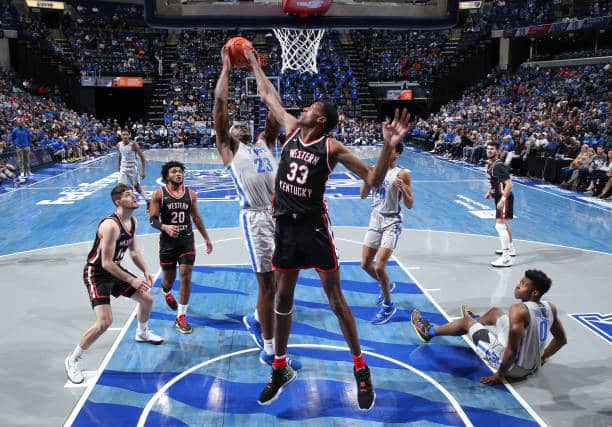 The Western Kentucky Hilltoppers had a crazy off-season of roster movement as they hope to build off some success last year.

CBB Review is once again ranking the top 100 teams heading into the 2022-23 season. Each day we will reveal the next team until we reach the team slotted at number one. Coming in ranked number 63 are the Western Kentucky Hilltoppers

The outlook of the Western Kentucky Hilltoppers season seemed to change almost by the week. This includes just a couple of weeks ago when it was announced that guard and former 5-star recruit Emmanuel Akot would be joining Western Kentucky this upcoming season. With the roster (seemingly) set, there are a lot of good pieces on the team that should spark some excitement into the Hilltopper fan base.

There is a lot of good talent returning to this team in addition to some transfers that will look to make up the rest of the rotation.

Dayvion was Mr. Do-it-all for Western Kentucky last season. He was the starting point guard and played about 37 minutes per game. He was tasked with creating everything on the offensive end, primarily out of pick and rolls. He is good at both getting to the rim and creating jumpers for himself. When driving or in pick and roll, his teammates always need to be ready as McKnight will find you if you are open.

When I say he always had the ball in his hands, I mean it. Per Synergy, McKnight took 184 pull-up jumpers last season compared to only 15 catch-and-shoot jumpers. He is a guy that is needed come March because of his ability to create open looks for himself and for others.

The Boise State transfer will look to provide that secondary ball handler and scoring punch for Western Kentucky this season. Last year he worked well both on the ball and off, but he was much more efficient off ball. That makes him a perfect fit next to someone like McKnight for Western Kentucky. Akot will not be forced to have to deal with a ton of primary ball handling, so he will be able to flourish off the ball. I expect a lot of screens and pin-downs for Akot to be run.

Akot was a very good catch and shoot 3 point shooter. Per Synergy, he was in the 87th percentile of efficiency. He has the ability to attack defenses that close out too hard on him though which makes him a very tough guy to guard.

This is a team that was solid on offense but struggled on defense at times. With some of the new transfers, I fully expect the offense to go up even another notch. However, the defense will decide whether Western Kentucky is dancing come March. They have an elite rim protector in 7’5 Jamarion Sharp, who had the second-best block percentage in all of D1 last season.

The Western Kentucky Hilltoppers made some noise in the national media headlines, with good reason. They have the talent to make a legitimate run in Conference USA. The one thing that may come as a worry is the lack of proven depth. Their bench will consist of a transfer who played at Western Kentucky before, 2 non-D1 transfers, and 2 transfers who were high-ranked recruits but never got their footing at their previous schools. That said, the talent on paper is there, it will come down to whether these guys can thrive in their new positions.

Western Kentucky is going to be a fun team to watch. They have one of the more dynamic point guards in McKnight, a versatile wing in Akot, and a 7-5 shot-blocking in Sharp. I expect there to be a decent amount of national media covering them this season. If things break right, don’t be surprised to see them in the tourney in March.