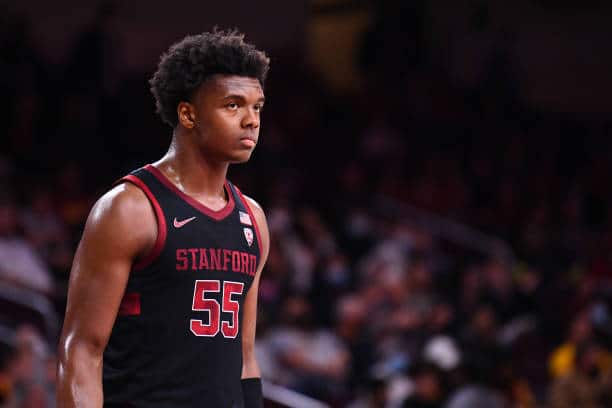 After a rocky last season, Stanford has reasons to be excited for this year.

CBB Review is once again ranking the top 100 teams heading into the 2022-23 season. Each day we will reveal the next team until we reach the team slotted at number one. Coming in ranked number 65 are the Stanford Cardinal.

Stanford had a very up and down year after coming into the season with some excitement due to 5 star freshman, Harrison Ingram. They started out the year strong, going 10-4 including a 4 game win streak over Wyoming, Liberty, USC, and Washington State. They then went 6-12 the rest of the way, including losing 5 of their last 6.

It is not all doom and gloom in Stanford though as they bring back the large majority of their roster. They also added a 4 star recruit, Jaylen Thompson, and a 3 star recruit, Ryan Agarwal, to the roster. The Cardinal were able to get grad transfer Michael Jones from Davidson who projects nicely into the system. With returners Ingram and Spencer Jones, there is plenty to be excited about on the team.

After there being thoughts Ingram could be a potential one-and-done, he returns to Stanford with the hopes of a better season to improve their record and his draft stock. He is listed as a forward, but he has the ball in his hands a lot. He ran a ton of pick and rolls for the Cardinal, but the efficiency lagged behind. You could see him trying to adjust to the college game, and at times he was overwhelmed.

On the other hand, Ingram still has that A list tier potential. He showcased it some last season in games such as in the games against USC and Arizona State. He is an athletic wing that has shown he can get downhill, create for others, and create his own jumpers. If the efficiency gets to where it needs to be for this team, I still think he can make the all conference team or better.

Jones was the leading scorer for Stanford last season, and he was their best shooter by a decent amount when factoring in volume. That is a huge need for Stanford as they were not a good shooting team last year. He mainly was an off ball, catch and shoot guy. Last season, 79% of his shots were catch and shoot, and he shot 1.095 points per possession on them. An interesting thing is he was actually more efficient when he was contested compared to open per Synergy.

Jones is a perfect fit around Ingram. He is someone that can help spread the floor, and he benefits from Ingram’s playmaking abilities. This will be another year that Stanford is going to need the 3 ball to drop from Jones.

Stanford turned the ball over more than almost every other team in the country last season. With only having two true guards on the team, there was not enough ball handling to go around. With more experience returning, I expect this number to drop for them.

Stanford is a team that did not succeed last season, but there is a realistic path to success. As mentioned above, they were awful with turning the ball over. They also were not a good shooting team, however, they return their best shooters and add grad transfer Michael Jones who is another player that will excel off the ball next to Ingram.

They were one of the best rebounding teams and one of the tallest. Per Kenpom, Stanford had the 3rd tallest team last season, and they return much of the talent. This is a team that has the capability to put lineups of all 6’4 and taller guys out there. The ability to switch 1-5 on defense will be interesting, and maintaining advantages on offense will be important.

In the end, a lot of this team’s success comes down to how much Ingram improves. He came in as one of the third best Stanford prospect in team history. With a year of experience under his belt, there is a lot of reason to be excited about both him and this team.